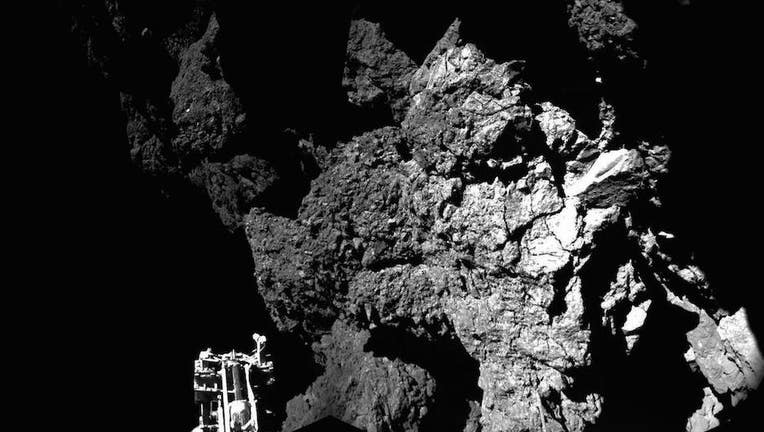 Philae Lander ‏@Philae2014 Nov 13Now that I’m safely on the ground, here is what my new home #67P looks like from where I am.(Photo: European Space Agency)

(CNN) -- So, what does a space probe do after landing on a comet?

That's the message Friday from the Philae probe after it landed on a comet 310 million miles from Earth.

That appears to be the European Space Agency's way of telling the world that it has made contact with Philae after its automated harpoon system failed to anchor it to the comet.

A short time later, another post on Twitter indicated it had successfully anchored on to the comet.

The space agency lost contact with Philae after it missed its first landing and then bounced twice, but not before it sent back a number of black-and-white images.

The pictures appear to indicate it landed in some sort of shadow, possibly the shadow of a cliff.

As a result, there were concerns the lander would not have enough battery power to transmit its findings. But then on Friday, the lander made contact, indicating it had used its drills to take samples from the comet, according to ESA.

"Against the odds -- with no downward thruster and with the automated harpoon system having not worked -- the intrepid Philae lander touched down a total of three times on the comet before coming to a final resting place on Wednesday," the ESA said in a post on its blog.

"While the search for the final landing site is still ongoing, the lander is racing against the clock to meet as many of the core science goals as possible before the primary battery is exhausted."

The lander is relying on solar energy to operate over time, and because of where the Philae landed, the ESA believes it is "unlikely that the secondary batteries will charge up enough to enable extended surface operations."

The lander is only getting about 1½ hours of sunlight a day, versus the six to seven hours scientists had anticipated.

As a result, Philae's planned mission is expected to end when the primary batteries run out sometime on Saturday, according to the space agency.

It's possible that the conditions may change as the comet moves closer to the sun, making it possible to charge the secondary batteries.

Philae is equipped with an array of experiments to photograph and test the surface of Comet 67P as well as to find out what happens when the roasting effect of the sun drives off gas and dust.

According to details on ESA's Rosetta website, sensors on the lander will measure the density and thermal properties of the surface, gas analyzers will help detect and identify any complex organic chemicals that might be present, while other tests will measure the magnetic field and interaction between the comet and solar wind.

Even with the lander out of commission, the orbiter that carried the Philae lander will continue to transmit observations of the comet, the ESA said.

Rosetta took off from Earth 10 years ago, aboard an Ariane 5 rocket, and traveled 6.4 billion miles before rendezvousing with the comet in August.

The Philae lander separated from the orbiting Rosetta about 3:30 a.m. ET Wednesday and first landed on the comet seven hours later.

The lander weighs about 220 pounds and is the size of a domestic washing machine. The target comet is only 4 kilometers, or 2.5 miles, in diameter.

Led by ESA with a consortium of partners including NASA, scientists on the Rosetta comet-chasing mission hope to learn more about the composition of comets and how they interact with the solar wind: high energy particles blasted into space by the sun.