WASHINGTON - The U.S. Environmental Protection Agency on Monday unveiled a new strategy to regulate PFAS, or so-called toxic "forever chemicals," that are associated with a range of health conditions and used in countless consumer products.

EPA Administrator Michael Regan announced a series of actions to limit pollution from the cluster of long-lasting chemicals that are increasingly turning up in public drinking water systems, private wells and even food. The initiative aims to restrict PFAS from being released into the environment, accelerate cleanup of PFAS-contaminated sites such as military bases and increase investments in research to learn more about where PFAS are found and how their spread can be prevented.

"For far too long, families across America – especially those in underserved communities – have suffered from PFAS in their water, their air, or in the land their children play on," Regan said in a statement. "This comprehensive, national PFAS strategy will deliver protections to people who are hurting, by advancing bold and concrete actions that address the full lifecycle of these chemicals."

He added: "Let there be no doubt that EPA is listening, we have your back, and we are laser-focused on protecting people from pollution and holding polluters accountable."

PFAS are called "forever chemicals" because they last so long in the environment. They have been associated with serious health conditions, including cancer and reduced birth weight.

PFAS is short for per- and polyfluoroalkyl substances that are used in nonstick frying pans, water-repellent sports gear, stain-resistant rugs, firefighting foam and many other products. The chemical bonds are so strong that they don’t degrade or do so only slowly in the environment and remain in a person's bloodstream indefinitely.

A study published earlier this year found that more than half of cosmetics sold in the U.S. and Canada contained fluorine — an indicator of PFAS. Researchers at the University of Notre Dame tested more than 230 commonly used cosmetics and found this to be true for 56% of foundations and eye products, 48% of lip products and 47% of mascaras.

Under the new strategy, the EPA will move to set aggressive drinking water limits for PFAS under the Safe Drinking Water Act and will require PFAS manufacturers to report on how toxic their products are.

The EPA also is moving to designate PFAS as hazardous substances under the so-called Superfund law that allows the EPA to force companies responsible for the contamination to pay for the cleanup work or do it themselves.

Environmental and public health groups welcomed the announcement. Advocates have long urged action on PFAS by the EPA, the Food and Drug Administration, the Defense Department and other agencies.

Thousands of communities have detected PFAS chemicals in their water, and PFAS have been confirmed at nearly 400 military installations, according to the Environmental Working Group, a research and advocacy organization.

"No one should have to worry about toxic forever chemicals in their tap water," said Scott Faber, the group's senior vice president. "We’re grateful that Administrator Regan will fulfill President Biden’s pledge to address (PFAS) ... and will begin to turn off the tap of industrial PFAS pollution."

The regulatory strategy comes as Congress considers wide-ranging legislation to set a national drinking water standard for certain PFAS chemicals and clean up contaminated sites across the country, including military bases where high rates of PFAS have been discovered.

Legislation passed by the House would set a national drinking water standard for PFAS and direct the EPA to develop discharge limits for a range of industries suspected of releasing PFAS into the water. The bill has stalled in the Senate.

"We’ve known about PFAS and its dangerous effects for years, and today, the federal government made a commitment to the American people that these chemicals cannot be ignored any longer,'' she said. 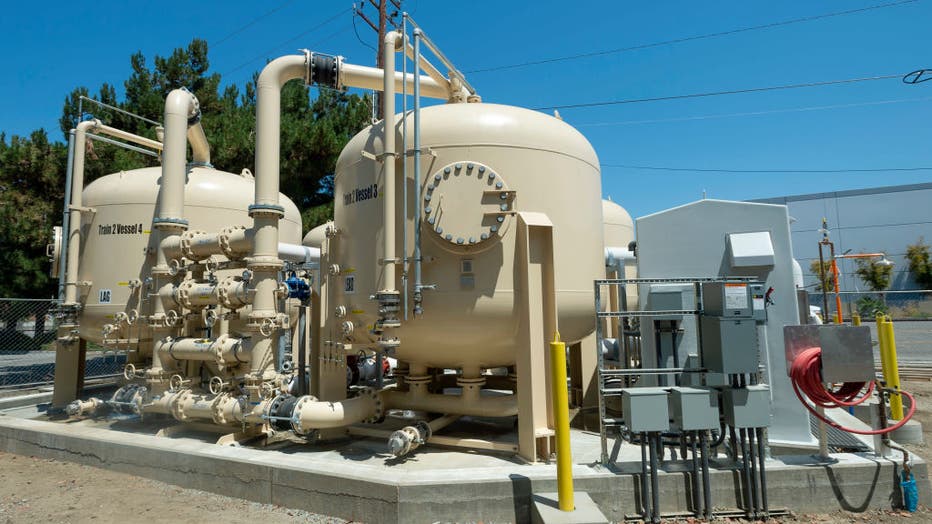 Fullerton, CA - July 01: Pressure vessels hold an ion exchange resin media that filters out PFAS at a new water treatment plant along Kimberly Ave. in Fullerton, CA. The plant is used to remove PFAS, a family of chemicals used for waterproofing and s

Regan, a former North Carolina environmental regulator who took over as the EPA head in March, said he saw firsthand in his home state how dangerous PFAS can be.

As North Carolina's top environmental official, Regan led negotiations that resulted in the cleanup of the Cape Fear River, which has been dangerously contaminated by PFAS industrial compounds that were released for decades from a manufacturing plant run by a spinoff of chemical giant DuPont.

"I spent time with families in their communities, talking to them about the fears and worries that they had,'' Regan told the Associated Press, who was set to announce the EPA actions Monday at a news conference in Raleigh. "I spent time talking to mothers who were concerned about potential long-term impacts to their children, caregivers who were wondering if terminal illnesses of their loved ones were connected" to the PFAS release from the Fayetteville Works plant.

"So there is a real sense of urgency,'' he added. "And in North Carolina, we moved forward. We followed the law and the science, and we held the polluter accountable.''

The EPA under his leadership has "done more in eight months" on PFAS than the previous administration did in four years, Regan said. Officials expect a proposed rule on PFAS in drinking water by 2023, he added.

"We’re going to move as quickly as possible to set these safe drinking water limits,'' he said.

Researchers at the National Atmospheric Deposition Program, say they have have found high levels of  toxic chemicals known as PFAS in rainwater, in some parts of the U.S.

Action on PFAS will not be done "on the backs of the American people,'' Regan added. "We are holding the polluters accountable, and we’re using the full extent of our statutory authority to be sure that they pay for what they’ve done.''

"This roadmap commits the EPA to quickly setting enforceable drinking water limits for these chemicals as well as giving stronger tools to communities to protect people’s health and the environment," Cooper said in a statement. "As we continue partnering with the EPA on this and other important efforts, the Bipartisan Infrastructure Deal and the larger budget resolution would provide critical help by dedicating significant resources to address PFAS contamination."