SEATTLE -- The support for a vice principal who says he was forced to leave his job at a Catholic school after marrying his gay partner continues to grow.

Today, a petition with more than 20,000 signatures was delivered to the Seattle Archdiocese. 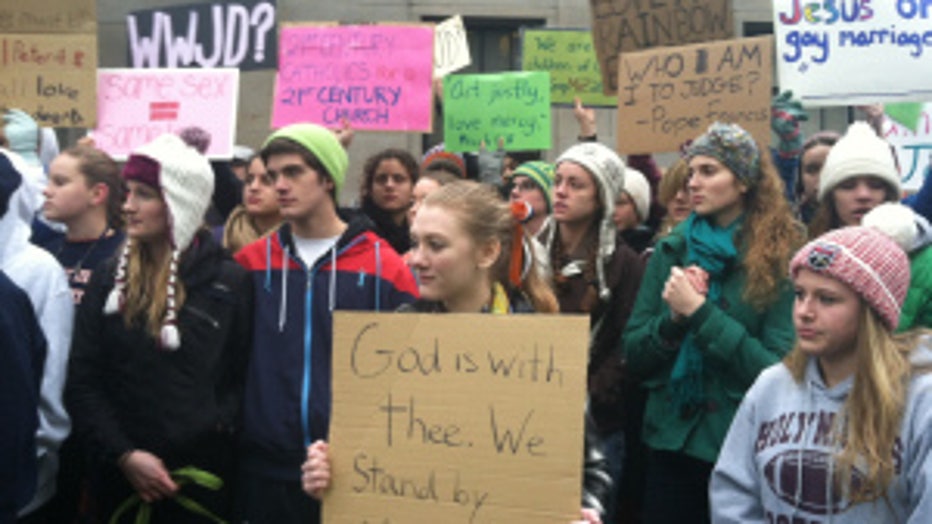 People from around the world are asking church officials to reconsider their view on marriage equality.

“I think it is important for the church to progress in their thinking and their ideas and with society,” says Christopher Gillette.

“I want there to be some more equality in my church, the church I believe in,” adds Lucy Gillette. “Hopefully that will happen, it might take some time.”

After receiving the petition, a spokesman for the Archdiocese came out and addressed the crowd. He says the school's decision has been misunderstood, and that their goal was not to discriminate, but to uphold the teachings of the Catholic Church.

“The school made its decision after a period of reflection and a period of consultation,” says Greg Magnoni. “Having made the decision, the Archdiocese supports them in that decision.”

Many asked what Pope Francis would think of this controversy, given his comments about not judging gays and lesbians.

“Everything he`s said to us indicates we have a responsibility as Catholics to live our lives fully within Catholic teachings,” Magnoni said.

Supporters say they didn't expect vast changes right away. They're just happy that a dialogue has begun.

“We don`t think the pope`s going to marry a gay couple next week. I don`t think the Archbishop is going to fly the rainbow flag,” says Sinser. “But this is a good chance to push the conversation forward a little bit.”