LEWIS COUNTY, Wash. -- There’s a renewed battle over an old billboard along Interstate-5 near Chehalis.

An online petition says the Uncle Sam billboard, which has been in Lewis County for more than 50 years, posts racist messages and it needs to be removed. It’s turned into a debate about racial sensitivity versus free speech.

The billboard is known for posting bold, right-wing messages. The message shown in the petition is no longer up on the billboard. Still, Lewis County Commissioner Gary Stamper says he saw the message for himself. 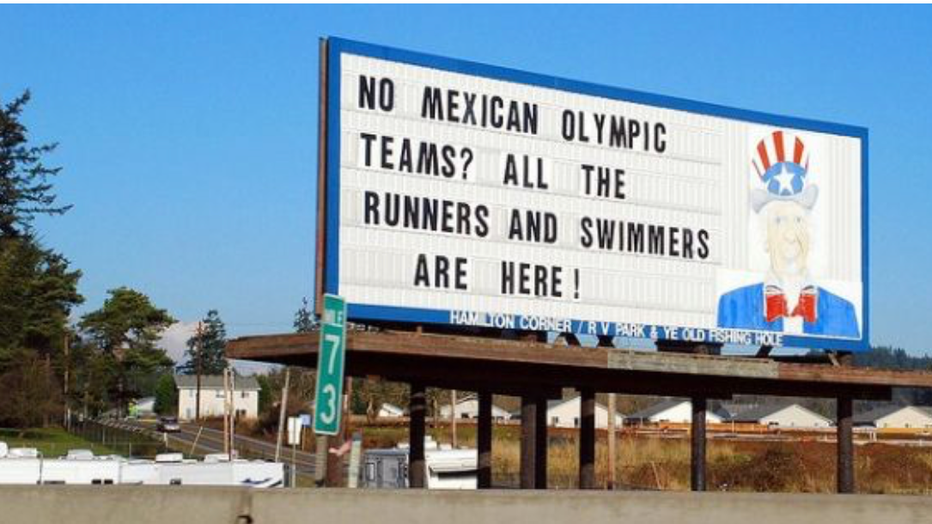 The billboard is on private property and privately owned. The petition with more than 75,000 online signatures calls the billboard racist, demanding it's got to go.

“It’s a matter of free speech," said resident Lou Desmond. "People don’t like it, get your own billboard.”

“If it’s not that sign, somebody would put up another sign somewhere else," said another resident Don Theus.  "As long as I can remember, that sign has been there. So, I don’t pay no attention to it because I don’t have to read it.”

The billboard is reportedly seen by more than 22 million passing cars per year.

It has its own Twitter and Yelp pages and has sparked fierce debates for decades.

After someone spray-painted the billboard back in 1971, supporters fought back, taking out this ad in the local newspaper.

In 1979, a lawsuit went all the way to the Washington Supreme Court, which sided with the owner, Alfred Hamilton.

Hamilton passed away in 2004. The family still owns the land, operates the sign and changes the message.

We contacted the family about this new petition and claims of racism. We reached Sherryl Zurek, daughter of Alfred Hamilton, who refused to comment.

Last Saturday, someone tried to burn down the billboard, setting fire to the grass below and support beams. Fire crews put out the flames before the sign was seriously damaged.

While the petition attempts to ignite Chehalis city leaders to do something, the billboard actually sits in the tiny town of Napavine.

Calls to Napavine city leaders were referred to Police Chief Salyers. Salyers said because the billboard is on private property, the city has no legal authority and therefore no plans to push for its removal.

The old Uncle Sam billboard and its controversial messages will continue to be the topic of debate.