The driver who hit her has been arrested for vehicular homicide.

UPDATE: 32-year-old Pierce Pearson has been charged with vehicular homicide in connection with this crash. The victim has been identified as 31-year-old Nina Fournier. Read the latest here.

A woman has died as a likely result of a high-speed crash, according to the Pierce County Sheriff's Office.

Deputies were called to the intersection of Canyon Road at 128th Street E. in Puyallup around 11 a.m. for reports of a two-car crash.

Witnesses say the woman was turning onto 128th Street when she was hit behind from the suspect vehicle.

Investigators believe the suspect vehicle was traveling at speeds of possibly over 100 mph.

The suspect's car went into the victim's vehicle, settling on top of it after he hit a bump in the road, according to Darren Moss, the public information officer at the Pierce County Sheriff's Office. 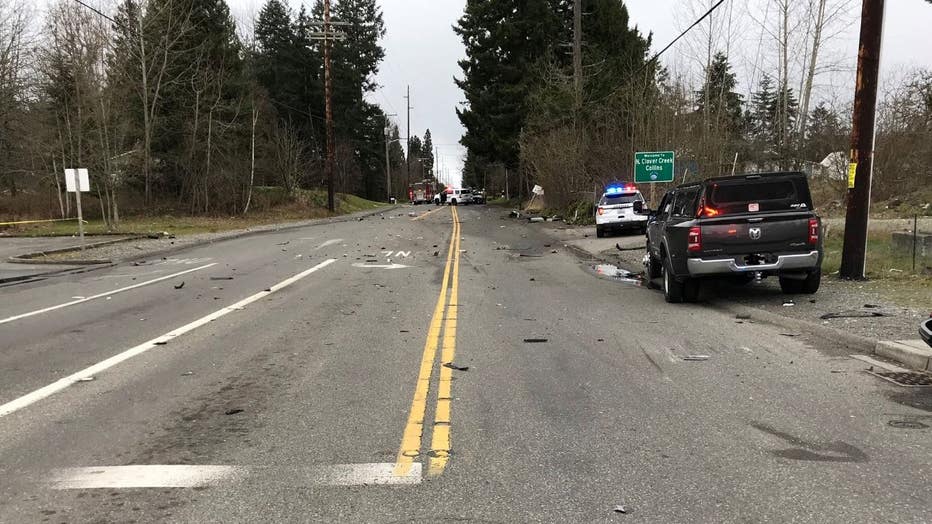 The 31-year-old woman was the sole occupant of the car she was in. She died at the scene.

The suspect, a 32-year-old man, was sent to the hospital in serious condition, but he's expected to survive. He was arrested for vehicular homicide.

Investigators are working to determine if drugs or alcohol were involved.

The road was closed for several hours while deputies investigated.

This is a developing story. Q13 News will have updates as they become available.