SEATTLE -- The longest highway closure in Puget Sound history is going to have to wait a few more months. The Alaskan Way Viaduct was projected to close sometime this fall so crews could realign State Route 99 to the new tunnel.

However, the department said, the southbound SR 99 off-ramp to South Atlantic Street is scheduled to close starting Friday, Jan. 4.

“The opening of the SR 99 tunnel will be an historic event in the state’s transportation history,” said Brian Nielsen, administrator of the Alaskan Way Viaduct Replacement Program. “Before we can celebrate, we have to get through an unprecedented closure that will require all of us to change our behavior.”

What's all going to happen?

The contractor Scarsella Bros. will complete the ramp and road connections between the new tunnel and SR 99. Most of the work will take place in the existing construction areas for the SR 99 tunnel. There will also be some sign bridge work on SR 99 and surface street paving.

Near the tunnel’s north end, crews will conduct final work to connect SR 99/Aurora Avenue North to the tunnel. Most of this work will happen during an approximately three-week closure of SR 99 right before the tunnel is ready to open to drivers. Crews will also pave a block of Sixth Avenue North that is currently part of the tunnel construction zone, and install traffic signals at the intersection of Aurora Avenue North and Harrison Street. 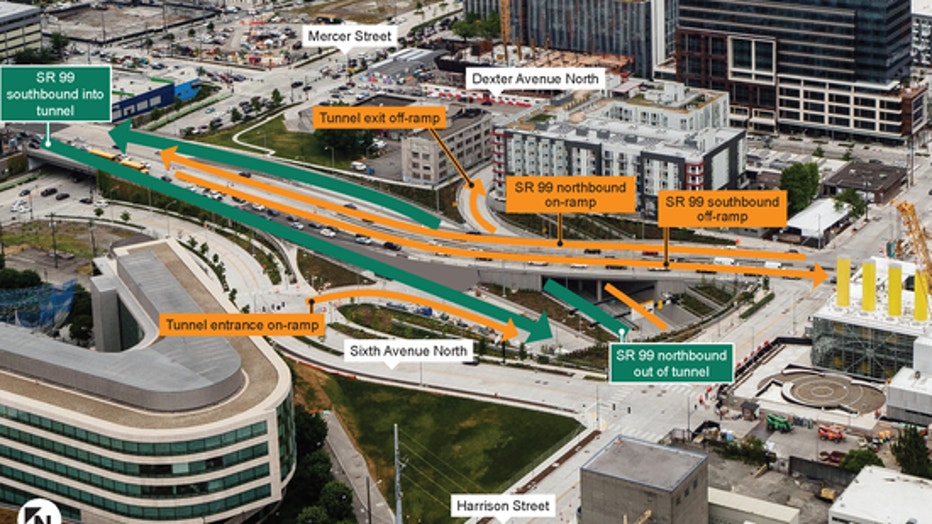 Scarsella Bros. crews will be busy in 2018 building the road connections between SR 99, surface streets, and the new tunnel. The graphics below show how most of the work will take place in what is currently the STP construction zone for the new tunnel. This includes creating a new stretch of South Dearborn Street.

However, when the tunnel is ready for drivers, the contractor will complete the ramps to the new tunnel, working in space that is today occupied by the SR 99 temporary bypass. This work is one reason why the viaduct will be closed for approximately three weeks right before the tunnel opens to traffic. 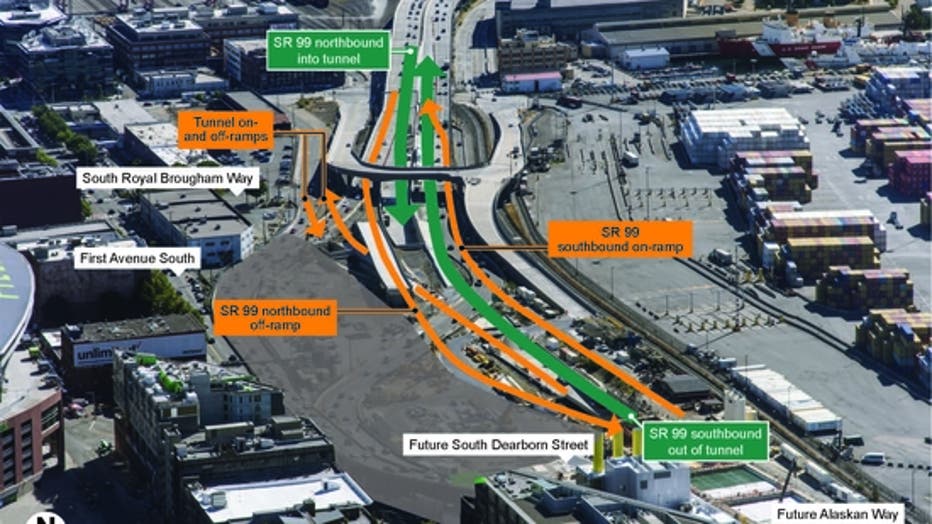 What can I do now?

Though January seems like a long way out, thinking about potential alternatives now can help you later.

Using your tools and having a game plan will be vital during the closure. We will have much more information about alternative ways to keep people and goods moving as the closure approaches.

We know from experience that closing SR 99 through Seattle has a region-wide impact. During past planned closures, commutes on I-5, I-405 and I-90 started earlier and lasted longer.

Seattle city streets were also more crowded. Many drivers pitched in and changed their commute times, but there's no question that three weeks is a long time to ask drivers to sustain change.

Add some rain to the equation and traffic could become even more challenging.

WSDOT says they working with their partner agencies to identify multiple ways to help keep people moving during the three-week shutdown of SR 99, but there's no doubt this will be a challenging time for everyone.

We will share more information as we get closer to a starting point for the closure.

What about the delays?

When Seattle Tunnel Partners finished disassembling the tunneling machine Bertha in 2017, WSDOT estimated the tunnel would be open in early 2019. While there was optimism this date could be moved up, a number of factors influenced the decision to stay with the early 2019 date:

The project was already several years behind schedule because Bertha's main bearing was damaged in December of 2013 after only about 10 percent of the tunnel had been bored.

Seattle Tunnel Partners and Bertha's manufacturer Hitachi Zosen came up with a plan to lift four million pounds of machinery up through a hole in the ground to repair the cutter head.

Two years later, STP resumed tunneling and completed boring the tunnel. WSDOT says the cause of the damage is under dispute and in litigation. 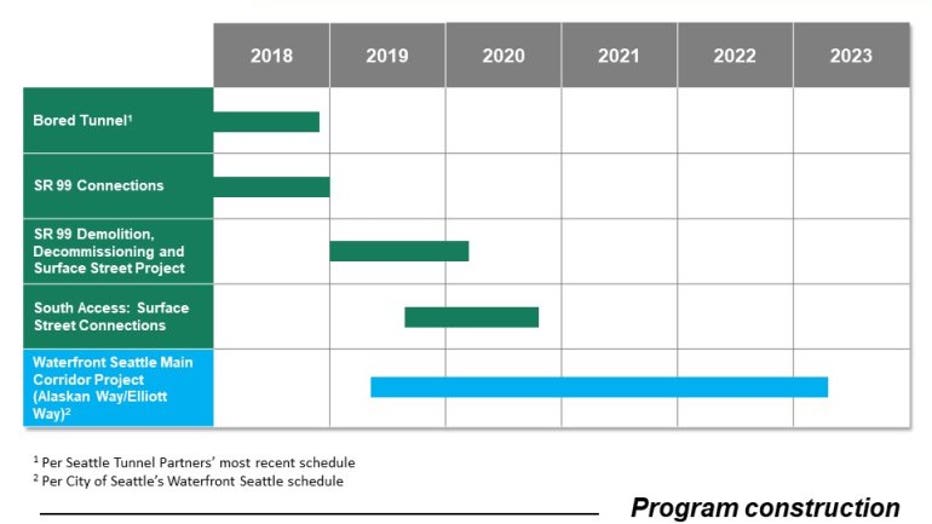 One of 'smartest' tunnels ever built

One of world’s smartest tunnels

One of world's smartest tunnels

The safety systems will make the SR 99 tunnel one of the smartest tunnels ever built, including:

Why build a tunnel?

Transportation officials explain the decision to replace the viaduct with a tunnel:

State Route 99 is critically important to local and regional transportation as it is one of only two major north-south highways through Seattle. The portion of SR 99 that travels through downtown Seattle is an elevated double-deck road called the Alaskan Way Viaduct. It was built in the 1950’s and is vulnerable to earthquakes, which is why replacing the viaduct is critical to public safety.

After the 2001 Nisqually earthquake damaged the viaduct, the Washington State Department of Transportation (WSDOT) reinforced the road, imposed roadway restrictions for large vehicles and began frequent monitoring and quarterly inspections to make sure the road remains safe for everyday use.

In 2009, after an extensive public process, the Washington State Legislature voted to replace the viaduct with a bored tunnel. This construction method allowed SR 99 to remain open through Seattle during construction. In 2011, crews demolished the southern mile of the viaduct – nearly half the structure – and replaced it with a new road. After the new SR 99 tunnel opens, the Alaskan Way Viaduct will be demolished to clear the way for Seattle’s Department of Transportation to build a new Alaskan Way on Seattle’s waterfront.