At least three deaths have been confirmed in Kentucky as flood waters continue to rise. FOX Weather's Will Nunley is live in Hazard, Kentucky. (FOX Weather)

HAZARD, Ky. - A line of slow-moving thunderstorms that dumped torrential rain across eastern Kentucky early Thursday is now being blamed for at least eight deaths as floodwaters damaged hundreds of homes and vehicles and rivers and creeks rose out of their banks.

Kentucky Gov. Andy Beshear announced the news on the deaths and asked for prayers for the Blue Grass state.

"Let me say that, unfortunately, I expect double-digit deaths in this flooding," the governor said. "It’s something that we rarely see."

‘HOUSES ARE FLOATING AWAY’: FAMILIES TRAPPED AS FLOODWATERS TEAR THROUGH EASTERN KENTUCKY

Three separate Flash Flood Emergencies were in effect early Thursday morning for areas around Hazard, Buckhorn and McRoberts, but the National Weather Service has allowed them all to expire as the heaviest rain has exited the region.

"Flash Flood Emergencies are issued only for exceedingly rare situations when we have life-threatening or catastrophic flooding ongoing within these communities," FOX Weather meteorologist Jane Minar explained. "We're talking feet of water on roadways – we've seen reports of that – we have homes that are flooded out, and we've had a number of water rescues as well."

The governor has declared a state of emergency and activated the Kentucky National Guard, which has responded with four helicopters. Two more helicopters are also en route from West Virginia.

"They see a number of people in Breathitt County alone on the roof, even we have some people in trees waiting for rescue," Beshear said Thursday afternoon in reference to what National Guard troops are encountering in the county some 70 miles southwest of Lexington. "This isn’t just a disaster. It is an ongoing natural disaster and we are in the midst of it."

According to reports relayed by the National Weather Service, multiple homes were severely flooded and cars were washed away by floodwaters.

Flash flood emergency continues in Kentucky. In the town of Hindman numerous people are trapped as the main road looks like a river with pieces of homes creating huge debris piles. (Credit: Brandon Clement/LSM)

"There are a lot of people on top of roofs in eastern Kentucky waiting to be rescued," Beshear said. "There are a number of people that are unaccounted for, and I’m nearly certain this is a situation where we’re going to lose some of them."

Many roads in this portion of eastern Kentucky were impassable because of high water. Water rescues were reported in several areas.

Members of West Virginia's National Guard were mobilized and sent to the Bluegrass State to help with search and rescue efforts.

HERE'S WHAT TO DO AFTER YOUR CAR FLOODS

Between 7 and 10 inches of rain has fallen in parts of eastern Kentucky since Wednesday, most of which fell in just a few hours early Thursday morning. The cities of Hazard and Jackson have both received nearly 8 inches.

Buckhorn Lake has seen the highest rain total so far, with a report of 10.40 inches of rain falling on Thursday.

"We're seeing one of the worst, most devastating flooding events in Kentucky’s history," Beshear said during an earlier news conference Thursday morning. 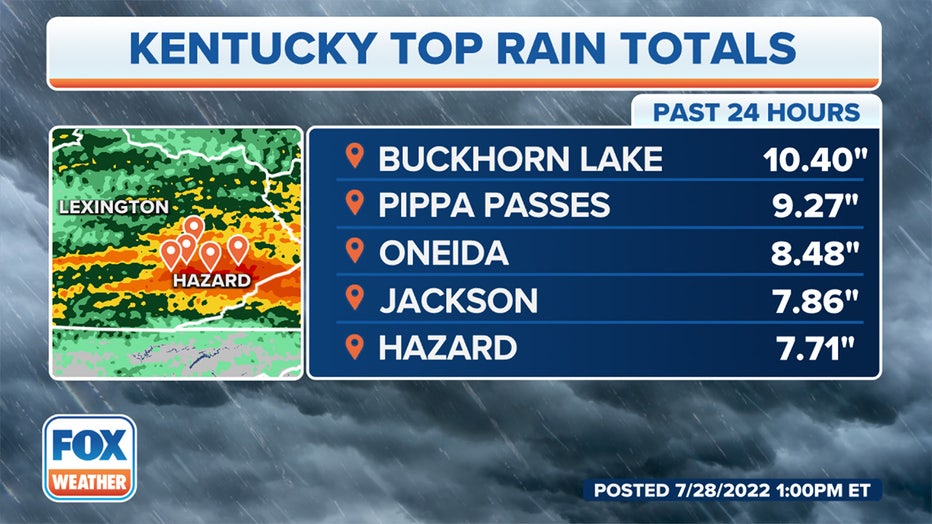 Rainfall totals in Kentucky over the past 24 hours. (FOX Weather)

The North Fork of the Kentucky River at Whitesburg has risen to an all-time record crest of 20.91 feet, obliterating the previous record of 14.7 feet from Jan. 29, 1957. The river level rose nearly 18 feet in about 10 hours early Thursday morning. Earlier this week, the river level was a measly 1.6 feet.

At the current level, homes and businesses along the river are flooded and the Kentucky Route 15 bridge in Whitesburg is flooded, according to the National Weather Service. 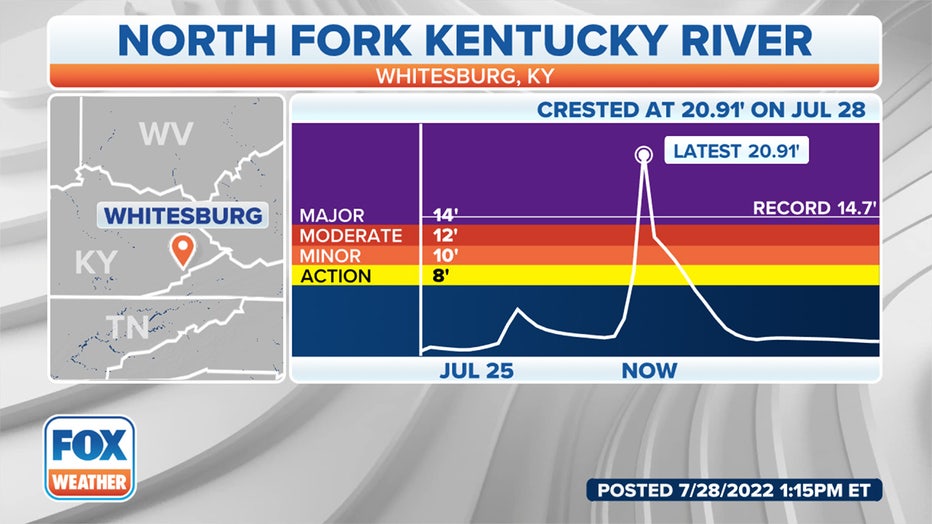 The Kentucky River near Ravenna is forecast to rise to moderate flood stage. (FOX Weather)

More than 24,000 people in Kentucky are without power as of Thursday afternoon. Most of the outages are in the eastern part of the state, where the serious flash flooding has been reported.

"This early in the storm restoration process is very hard to predict an estimated time of restoration," Kentucky Power spokesperson Cindy Wiseman said. "Mostly it’s because in this situation many of the roads are still blocked and not accessible so we can’t even get into some of these areas that need to be restored."

Wiseman said many homes and businesses will need major repairs done due to the extensive damage caused by the flash flooding that occurred across eastern Kentucky.

"This is definitely a multi-day outage restoration event, but it could lead into longer time periods depending on the situations as we come upon them," Wiseman said. 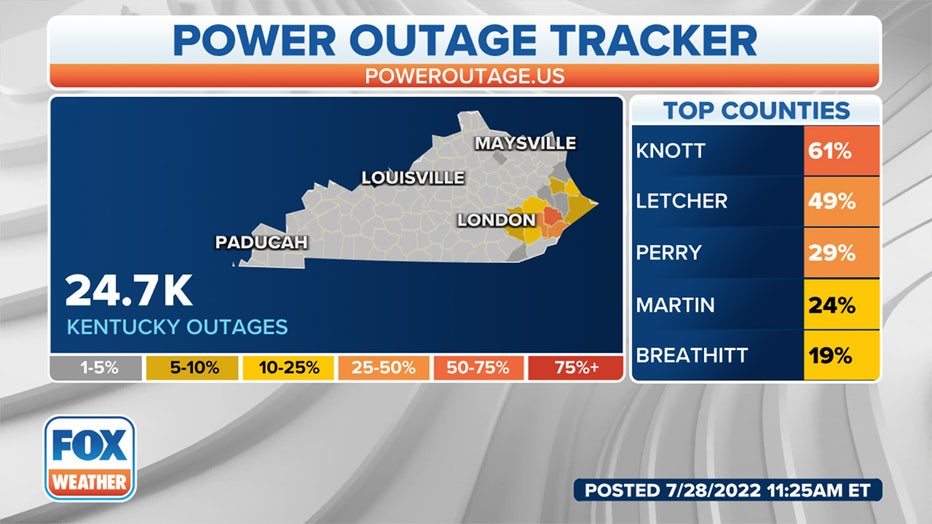 This catastrophic flooding in Kentucky came just two days after a historic flood in St. Louis killed one person on Tuesday when more than 9 inches of rain fell.

The Kentucky Red Cross has opened several shelters in the state and the governor has launched a relief fund for impacted residents.

How to donate to the relief efforts: Read more

Parts of eastern Kentucky are underwater Thursday morning as heavy rain causes a Flash Flood Emergency across the Blue Grass State. A stalled front has dumped over 6 inches of water in a short amount of time. (Credit: Brandon Clement/LSM)

Additional areas of flash flooding are possible through the end of the week as several rounds of showers and thunderstorms threaten a west-to-east corridor extending from the Front Range of the Rockies to the Appalachians.

OVER 9 INCHES IN 24 HOURS: HOW THE ST. LOUIS RECORD RAINFALL CAME TO BE

A process called orographic lift will likely contribute to an enhanced flash flood threat in the Appalachians, including Kentucky. Orographic lift occurs when air is forced up a mountainside and cools to the point of water vapor forming. The increased moisture can cause extensive cloud cover and heavy rainfall. 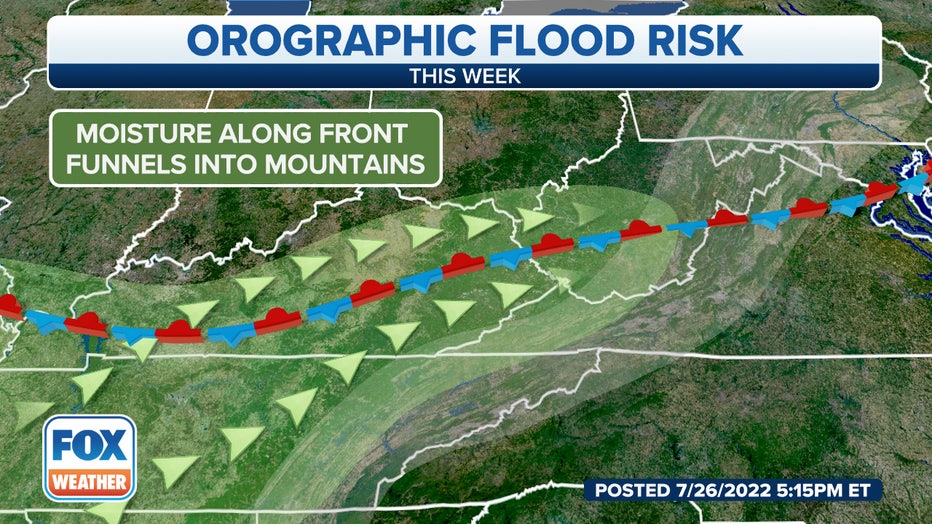 The flash flood threat will likely be enhanced in the Appalachians due to a process called orographic lift. (FOX Weather)

"The air is lifted over that mountain chain, and as it does so, that air cools and condenses, forming the clouds that we see at the top of the mountain chain," Minar explained. "What tends to happen, too, is the air becomes very moisture-rich, leading to some very, very heavy rain, and that has the concern of bringing in some flash flooding."

In the three-hour radar loop below, you can see where the heaviest rain is currently falling from portions of the Central Plains to the Appalachians.

Flood Watches have been issued by the National Weather Service for parts of Kentucky, West Virginia, southwestern Virginia and southern Ohio. A watch means that flooding is possible in the indicated areas. 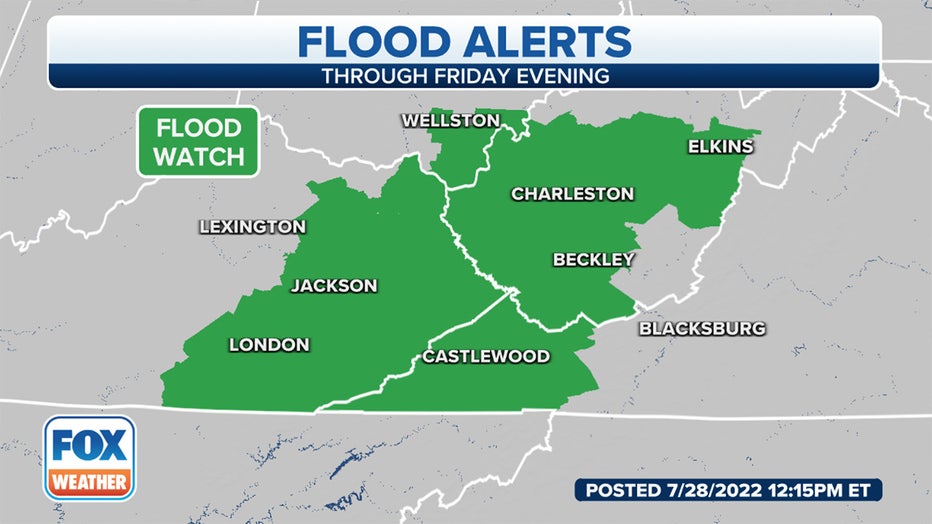 7 FACTS YOU SHOULD KNOW ABOUT FLASH FLOODS

The flash flood threat will remain high on Friday and Friday night for parts of eastern Kentucky and West Virginia.

However, heavy rain could also trigger scattered flash flooding from southern Kansas and northern Oklahoma eastward into the Ozarks, Tennessee and the central Appalachians. 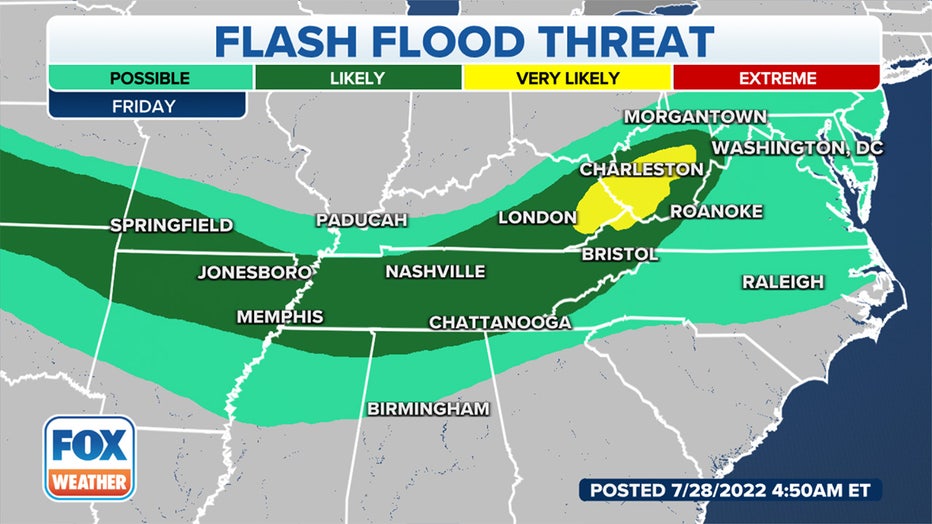 Many of the locations at risk of flash flooding through the end of the week could receive at least an additional 1 to 3 inches of rain.

However, locally higher amounts upward of 3 to 8 inches are likely where any showers and storms stall or track over the same areas. 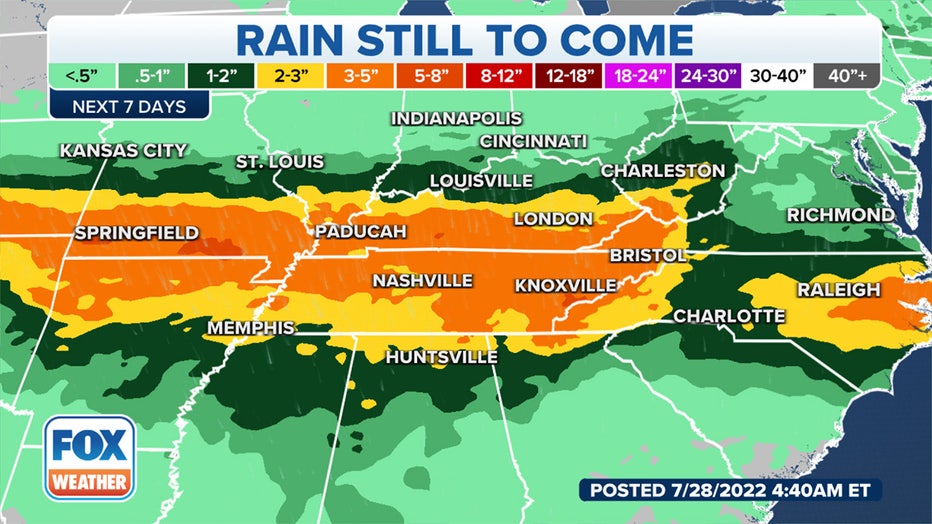 Rainfall forecast over the next several days. (FOX Weather)

Be sure to take this week's flash flood threat seriously. You should have a way of receiving potentially life-saving Flash Flood Warnings issued by the National Weather Service, including the rare Flash Flood Emergency.

The FOX Weather app is a great resource that can be used to alert you of any watches or warnings issued for your area. The free FOX Weather livestream is also available 24/7 on the website and app and on your favorite streaming platform. The FOX Weather Update podcast also provides weather information for the entire country.