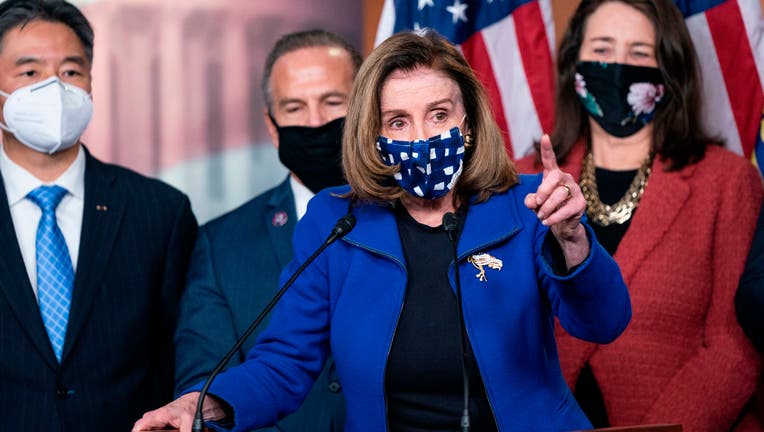 US Speaker of the House Nancy Pelosi, with House impeachment managers, speaks to the press after the Senate voted to acquit former US President Donald Trump, in the US Capitol in Washington, DC, on February 13, 2021. - Former US president Donald Trum

House Speaker Nancy Pelosi, D-Calif., blasted Senate Republicans as cowards who refused to stand up to former President Trump and find him guilty in the impeachment trial.

"What we saw in that Senate today was a cowardly group of Republicans," Pelosi said of the majority of the Senate GOP who found Trump "not guilty" of incitement of insurrection.

Pelosi joined the House impeachment managers Saturday at a news conference after the Senate acquitted Trump again in his second impeachment trial. The vote 57-43 in favor of conviction, but still 10 short of the supermajority needed.

Pelosi took special aim at GOP Leader Mitch McConnell for delaying the start of the impeachment trial and then saying Saturday he couldn't vote to convict Trump because the trial started after Trump left office.

"You chose not to receive it," Pelosi said of the article of impeachment the House wanted to deliver earlier.

"That was the excuse that he used," she added.

This is a breaking news story check back for updates.