TUCSON, Ariz. - Police say one person is in custody and a suspect is dead following an officer-involved shooting at an Amtrak station in downtown Tucson. A local DEA agent has died, another DEA agent is in critical condition and a Tucson Police officer is injured, but in stable condition.

The shooting happened just after 8 a.m. on a train parked at the station in the city’s downtown. "The incident was reported as a shooting just after 8 a.m. near 400 N. Toole Ave.," Tucson Police tweeted on Oct. 4. "One person has been detained."

There are no reported injuries to the crew or passengers, said Amtrak spokesman Jason Abrams.

The Sunset Limited, Train 2, was traveling from Los Angeles to New Orleans, and arrived at the Tucson station at 7:40 am, Abrams said. There were 137 passengers and 11 crew members, he said. All have been evacuated to the station.

Acting on tips from Amtrak, authorities say they got permission to search baggage belonging to Darrion Taylor and another passenger in the same row, Devonte Okeith Mathis. When an officer found two bulk packages of marijuana during an inspection on the platform, Michael Garbo, a DEA group supervisor, and another agent reentered a train car to talk to Taylor.

Authorities say that’s when Taylor opened fire, killing Garbo and wounding a second agent. Another Tucson police officer was also caught in the gunfire and wounded.

Authorities say Taylor exchanged several rounds with police before barricading himself in a lower-level bathroom where he was later found dead inside.

The Pima County Medical Examiner’s Office in Tucson said in a news release that Taylor, 26, was shot in the torso and limbs.

The wounds were not self-inflicted, according to medical examiner Dr. Gregory Hess. A more detailed autopsy will be completed sometime next month.

Mathis, meanwhile, was arrested on suspicion of knowingly and intentionally possessing with the intent to distribute less than 50 kilograms (110 pounds) of a mixture or substance containing a detectable amount of marijuana.

The agent and officer both remain hospitalized. Their names have not been released.

According to Amtrak policy, firearms and ammunition are not allowed to be carried on, but they can be placed in checked baggage and Amtrak must be notified in advance. 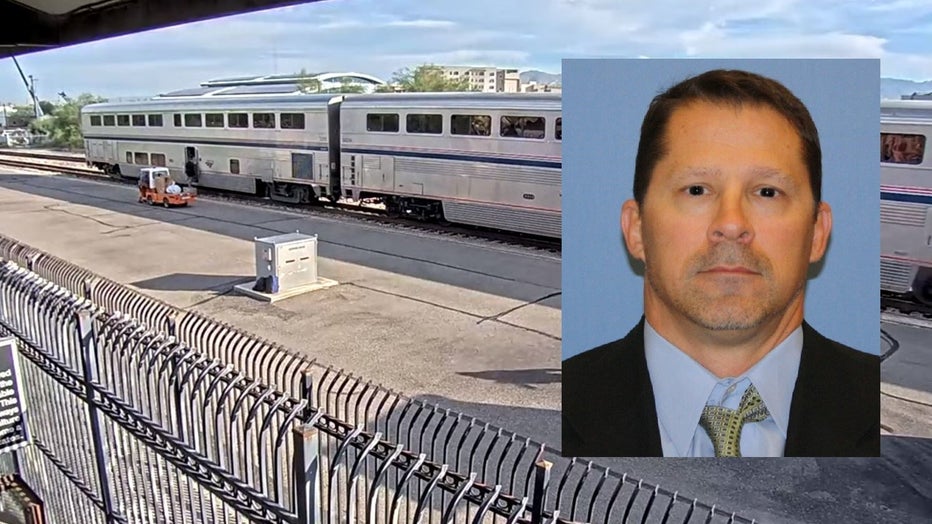 Gov. Doug Ducey says the name of the agent who was killed in Tucson at the Amtrak station is Michael Garbo, a group supervisor with the agency.

Gov. Doug Ducey says the name of the agent who was killed is Michael Garbo, a group supervisor with the agency.

"Garbo joined the DEA in 2005 and served for more than 16 years combatting drug trafficking from Nogales, Arizona to Kabul, Afghanistan as a Special Agent and Group Supervisor. He was recognized for his expertise, leadership and mentorship of his colleagues and as a devoted father and husband," Ducey said in a statement, in part.

Adding, "Every day, law enforcement personnel put their lives on the line to keep Arizona and our nation safe. Group Supervisor Garbo died serving others in that heroic duty. He dedicated his career to protecting our communities from the trafficking of illegal drugs and the crime that accompanies them. He will be remembered for his exceptional service and the deep impact he had on all those who worked with him."

On Tuesday, the governor ordered flags at all state buildings to be lowered to half-staff until sunset on Wednesday.

Funeral arrangements have been set for Garbo on Oct. 8 at the Calvary Chapel in Tucson.

The DEA says church parking will be limited and the lot will close prior to the procession’s arrival.

Evan Courtney was in a lounge car when people suddenly came running in yelling "Shots fired!"

"I grabbed my backpack and ran," Courtney told The Associated Press via Twitter direct messaging.

He said he huddled with other passengers while looking out the window. He saw several tactical police officers with assault rifles behind barricades. After 15 minutes, "police ran to us and told us to get out of the car and run in the opposite direction."

Dramatic video taken by a camera at the Southern Arizona Transportation Museum shows some of the shooting.

Multiple shots can be heard from inside a train before a man, who appears to be a security officer with a dog, boards in the middle of the second-to-last car through an open door. Two bystanders back away and then run past a baggage cart, joining four others as they usher each other into the last car and the door slides shut, the video shows.

One shot is heard and the security officer, holding a gun, backs off the train with the dog still on the leash. He runs behind a structure on the train platform as a man appears at the passenger car door, fires three shots toward the fleeing man and dog, and disappears back inside.

The camera belongs to Virtual Railfan, which operates more than 50 cameras livestreaming train operations around the country for train buffs. Kathy Abbott, operations manager, said both Tucson police and Amtrak police have asked for any footage to be made available.

Virtual Railfan’s cameras do capture crime but "maybe not this dramatic," Abbott said. "This was definitely an adrenaline rush."

The names of the suspects have not been released.

Tucson, home to the University of Arizona, is about 110 miles (180 kilometers) south of Phoenix.

Leaders react to the violence

US Attorney General Merrick Garland responds to the shooting, saying, "This past week has been a reminder for all of us at the Department of Justice of the risks our deputies, agents and local law enforcement partners confront each day. I’m deeply saddened by the shooting this morning in Tucson, Arizona, that killed a DEA Special Agent and injured another DEA Agent and a task force officer from the Tucson Police Department."

Arizona Gov. Doug Ducey said of the incident, "My heartfelt condolences are with the loved ones and colleagues of the DEA agent who lost his life today in Tucson. Two other law enforcement officers are injured in the hospital. Our prayers are with them, their families and the law enforcement community."

"Horrified to hear of the senseless violence in Tucson this morning, and the loss of a local law enforcement officer. Wishing a quick and full recovery to the injured officers and sending strength to all those affected and the entire Tucson community," said Arizona Senator Kyrsten Sinema in a Tweet.

DEA agent killed, 1 in custody after shots were fired on Amtrak train in Tucson 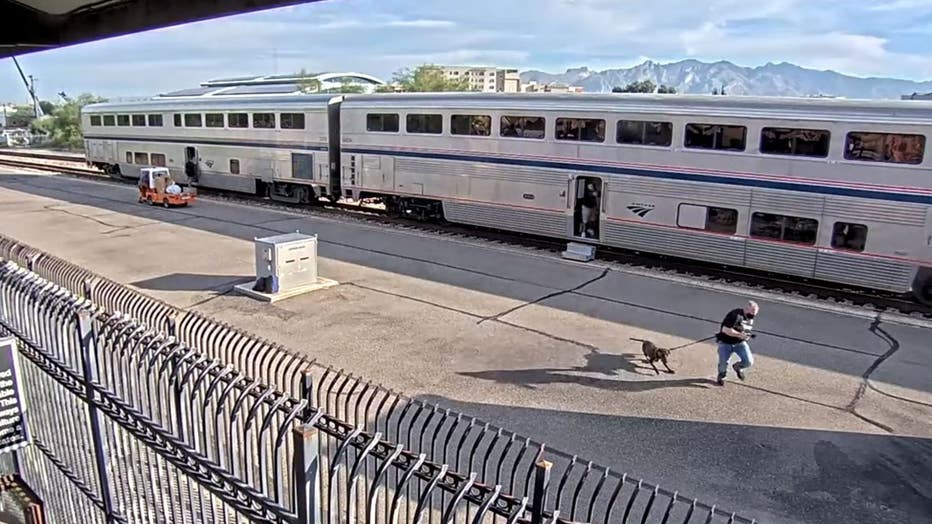 Police say one person is in custody following a shooting at an Amtrak station in downtown Tucson. ( Virtual Railfan/Youtube)

One local DEA agent is dead after someone opened fire Oct. 4 aboard an Amtrak train in Tucson, Arizona, causing passengers to flee, police said.