Paul Allen`s impact on the arts

SEATTLE - Paul Allen’s passion for arts and culture permeated across Seattle, from opening the Museum of Pop Culture, saving Cinerama, to starting the Up Stream Music Festival and investing in the radio station, KEXP, at a time when it was small and struggling. He championed Pacific Northwest artists and musicians to thrive in the city.

“Everywhere at Once” was the 2013 album name of Allen’s band, “Paul Allen and the Underthinkers,” and some may say it was also reminiscent of Allen’s mark on the city, he was everywhere at once from tech and medicine to arts and culture. 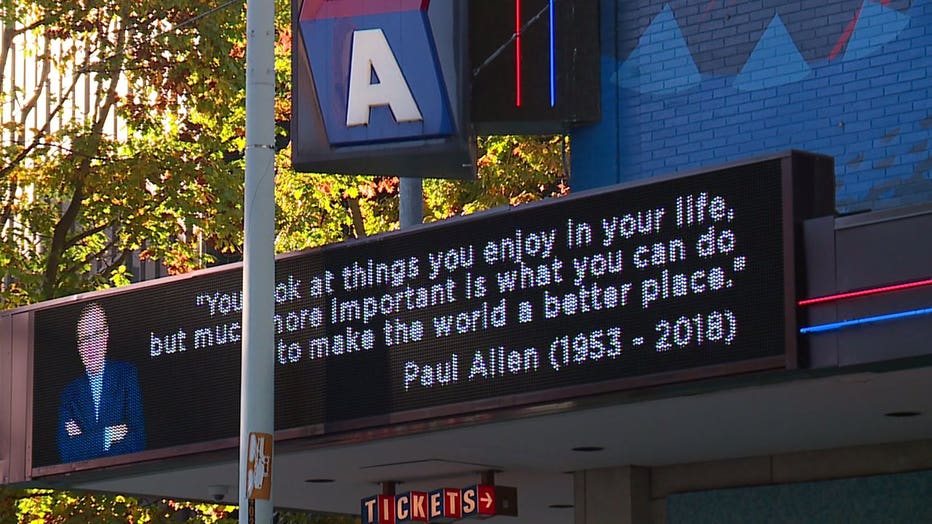 A tribute to Paul Allen outside Cinerama. Allen died of complications from non-Hodgkin's lymphoma on October 15, 2018. (KCPQ/Byrin Miller)

Illuminated on the marquee of the Cinerama Theatre in downtown Seattle, a tribute to Allen who bought the place in 1998, saving the theatre from demolition. He invested millions in its renovation and upgrades since.

As a lover of the arts, Allen’s taste in music was as diverse as his passions. A violinist growing up, classical music influenced his long-time support of the Seattle Symphony, but it was a Jimi Hendrick’s concert he attended at age 16 that struck a chord with his love for the electric guitar.

“He was an ardent music fan and he was a particular champion of Pacific Northwest artists,” said Thomas Mara, executive director of KEXP.

Mara says Allen donated millions of dollars to the radio station 17 years ago at a time when it was small and struggling. In 2001, Paul Allen made a transformative $3.6M gift to then-KCMU, which resulted in the station becoming independent of the University of Washington, and changing call-letters to KEXP. This venture philanthropy also allowed the station to grow and become financially self-sufficient within three years,

“Before Paul got involved with KEXP, we had two full-time staff, and his commitment to venture philanthropy enabled us to go to get to a $2 million dollar level in just three years and we’ve been in the black ever since,” said Mara.

Mara says it’s Allen’s support of the station and starting the upstream music festival that’s given rising musicians a stage for success.

“He could’ve done anything and that’s what he has chosen to do and that speaks volumes of his support of Seattle and the Northwest music scene,” said Mara.

Mara says Allen was a humble man, remembering when he came to the radio station.

“He was a very quiet very gentle person as we were going through the station. It was probably a much bigger deal for me than for him I would say. It was gratifying to finally show him the example of the many things he’s supported, and I’ll never forget that,” said Mara.

Perhaps his most visible contribution to the arts, that oddly shaped building at Seattle Center, the Museum of Pop Culture, MOPOP which was formerly known as the Experience Music Project.

Inside showcases of music, the arts, film and technology are on display everywhere at once.

Proceeds from that 2013 album have gone to fund educational programs at MoPOP.