A timeline of the 2015 Paris terror attacks

On Nov. 13, 2015, members of the Islamic State group opened fire and detonated suicide vests at the Bataclan concert hall, the Stade de France and in neighborhood restaurants and bars. Ninety of the victims were killed at the Bataclan, where American rock group Eagles of Death Metal performed in front of a full house.

Survivors are still testifying about the ordeal to this day. Even though nine attackers died that night, a malfunctioning suicide vest spared the life of one suspect — who fled the city amid the chaos.

Authorities later found and arrested him. He is among the more than a dozen men facing charges in an ongoing trial, the Associated Press reported. The suspects face life in prison if convicted. 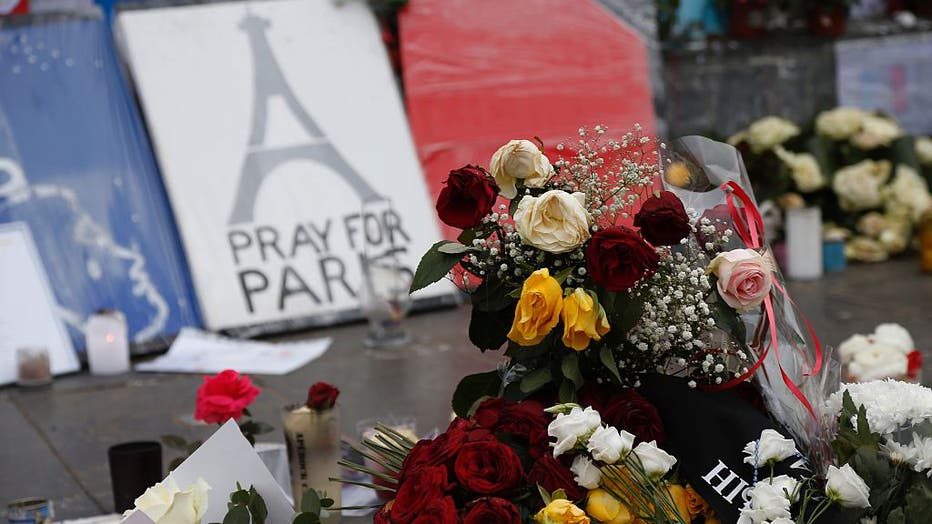 Candles and flowers are placed at a makeshift memorial in Place de la Republique square in Paris on December 13, 2015, a month after the Paris terror attacks on November 13, 2015 that claimed 130 lives. AFP PHOTO / THOMAS SAMSON / AFP / THOMAS SAMSON

The tragedy lives in the minds of the French every day, but especially on Nov. 13. According to France 24, Prime Minister Jean Castex and other officials stood in silence Saturday morning to remember the victims of the attacks.

French Muslims, who strongly condemned the attacks 6 years ago, continued to mourn the victims on Saturday. Leaders of the Paris Mosque laid a wreath at the concert hall.

Here’s a look back at what happened the night of the attacks.

Three explosions rocked France’s national stadium at 9:16, 9:19 and 9:53 p.m. The three suicide bombers died in the blasts, but they also claimed the lives of four people attending an international friendly soccer match between the French and Germans.

According to the BBC, the three bombers arrived to the stadium late and were turned away at the gate because they did not have tickets.

Roughly 20 minutes after kickoff, the first bomb went off outside of the stadium. A security guard had discovered the bomber’s vest during a pat down. The attacker detonated the vest just seconds later.

Security evacuated Hollande at halftime of the match while and Steinmeier remained at the stadium. Hollande went on to coordinate the country’s response.

After the game, fans were brought onto the field while they awaited evacuation.

The terrorists drove to the Café Bonne Bière and killed five more people at 9:32 p.m. Four minutes later, they arrived at La Belle Équipe where many people sat on outdoor terraces.

The final restaurant attacked was the Comptoir Voltaire café. The attackers dropped off one of their comrades at 9:40 p.m. He sat down in the restaurant, placed an order and smiled at another customer — apologizing for interrupting their dinner.

According to the BBC, he then detonated his vest, killing himself and injuring 15 people.

Gunfire began at the concert hall at 9:47 p.m. People inside the concert hall scrambled, desperate to find safety. But bullets cut down many of them before they could even leave the dance pit.

Many of those who outran the gunmen fled up a stairway to a dead end. They hid in closets and crawled into holes they’d created in the ceiling.

The gunmen eventually made their way upstairs, rounding up hostages in the process. Police made contact with the gunmen through a hostage’s phone.

The police then pushed in an enormous 200-pound black shield impervious to bullets, as big as the door itself.

One of the gunmen emptied his clip while the other detonated his vest. The entire building shook.

When the dust settled, the final two gunmen lay dead and all 11 hostages were alive. Nearly three hours had gone by since the gunmen took over the Bataclan.

Another hour would go by before police located all the survivors who had been hiding in closets, the ceiling and on the roof. Outside the concert hall awaited more police, paramedics and Hollande.

Hollande watched from the street as bloodied survivors staggered out of the Bataclan concert hall. He testified Wednesday in the trial of the 15 men accused of providing logistical aid to the attackers.

"I see people leaving the Bataclan, even then, holding on to each other. They see me and cannot say a single word," he testified. "This will remain with me forever."

ISIS claimed credit for the attack, calling it retribution for French airstrikes to the terror group in Iraq and Syria in August 2015.

Hollande testified his government first learned of an ISIS terror threat as far back as June 2014, but they couldn’t pinpoint when it would be. He said officials identified Abdelhamid Abaaoud as a mastermind behind potential attacks in August 2015.

Officials now believe he coordinated the Paris attacks. He was killed in a police raid days later.

On Sept. 27, 2015, France used airstrikes to target Raqqa in Syria, trying to disrupt any plot to attack France. But Abaaoud was already en rout to Paris at the time of the strike.

On the night of the attacks, a friend helped Abaaoud flee to a hideout in Molenbeek. The driver is along the men facing charges.

As he promised in his opening statement, Hollande answered every question put to him by victims' lawyers, even when the presiding judge grew testy at times with their repetition.

It was, he said, his responsibility: "I owe it to those who survived and who live every day in their flesh and in their minds the memory of this evening and who seek and demand explanations."