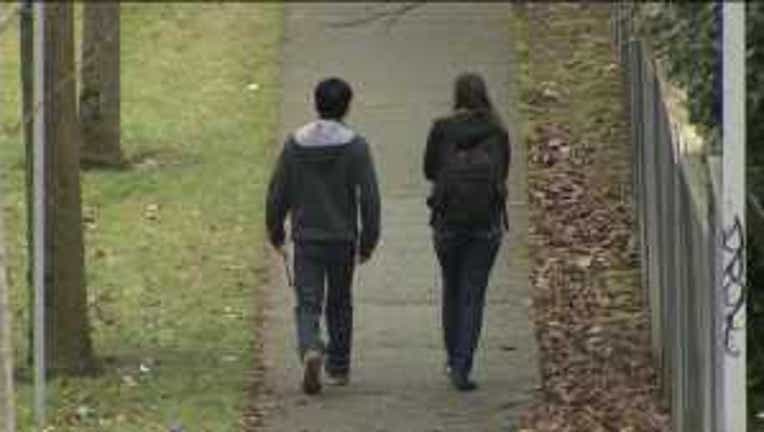 The first incident occurred at 6:30 p.m. Sunday when two teens armed with a shotgun robbed a group of middle school students, hitting two of them over the head with the butt of the gun.

The second incident happened at 3 p.m. on Tuesday.  In that case, two teens wearing red bandanas and carrying handguns stole cell phones and cash from a different group of students.

Keno Stokes has three kids who go to Roxhill Elementary right next to the park and a daughter  who goes to Denny International Middle School.  He’s worried another child could get hurt.

“Sixteen-year-olds carrying guns?  That’s a serious problem.  They could have shot a kid,” said Stokes.

Now, the school district is sending home a safety alert to parents. In the letter, school officials encourage parents to talk to their kids about walking in groups, going directly home after school and not carrying any electronics out in the open.

Seattle Public Schools sent that letter home with all students in the southwest region of the district. It also stated that Seattle police will be increasing patrols in the area where the robberies took place.

Police say they did not get a good description of the suspects, only that they are black males around 16 or 17 years old.

Below is the copy of the letter sent home to parents of students:

I want to alert you to recent off-campus robberies of Seattle Public Schools students in the Southwest region in the last few days, and to encourage you to discuss personal safety with your children.

In these cases, students were robbed of cash and cell phones. None of these incidents occurred on school grounds or during school hours, but we are always concerned about the safety and security of our students.   We have spoken with the Seattle Police Department and they are planning to increase their patrols in affected neighborhoods as a result of these robberies.

In the next few days, staff at your school will be discussing personal safety with the students. In particular, classes will be reviewing what to do when a stranger talks with them or approaches them. Our goal is to allow students to talk about their concerns and give them personal safety skills that are useful during the school year and generally when out in the community.

You can also help your children by talking and listening to them. As a reminder, please talk to your child or children about walking in pairs when possible, being aware of their surroundings at all times and ensuring that all electronic gear is worn discretely. We encourage you to be sensitive to your child and to call us if we can help in any way.

In addition, we have printed below a list of helpful safety tips from the Seattle Police Department.

If we can provide further assistance, please let us know.