The Louisville, Kentucky-based company is a major NFL sponsor and advertiser, and Schnatter said on an earnings call on Nov. 1 that "NFL leadership has hurt Papa John's shareholders" and that the protests "should have been nipped in the bud a year and a half ago."

The company tweeted a statement offering to "work with the players and league to find a positive way forward." 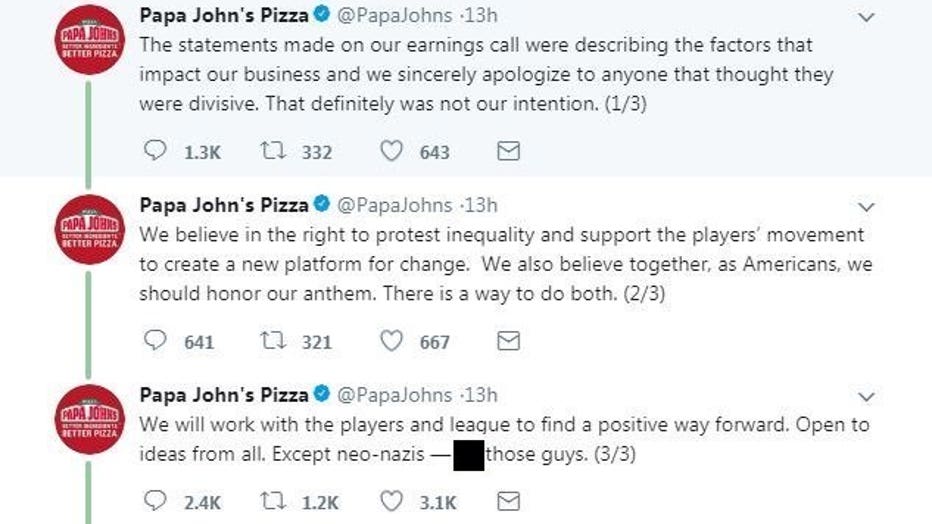 Papa John's is trying to repair the damage caused by its CEO's controversial comments about the NFL protests.

"The statements made on our earnings call were describing the factors that impact our business and we sincerely apologize to anyone that thought they were divisive," it said. "That definitely was not our intention.

"We believe in the right to protest inequality and support the players' movement to create a new platform for change. We also believe, as Americans, we should honor our anthem. There is a way to do both."

The movement was started last year by former San Francisco 49ers quarterback Colin Kaepernick, who kneeled to protest what he said was police mistreatment of blacks. More players began kneeling after President Donald Trump said at an Alabama rally in September that team owners should get rid of players who protest during the anthem.

Papa John's added that it is "open to ideas from all. Except neo-Nazis." It previously has tried to distance itself from white supremacists who praised Schnatter's comments, saying it does not want those groups to buy its pizza.

The company's stock has fallen by nearly 13 percent since Schnatter's comments.