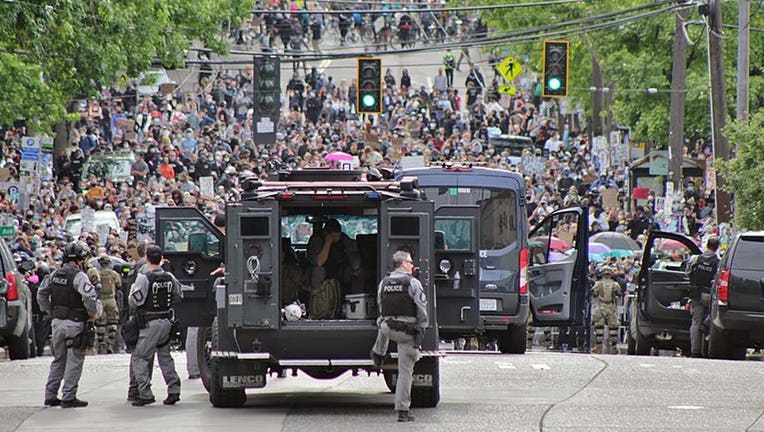 SEATTLE - An independent review of Seattle Police’s response to the 2020 protest continues, identifying an "erosion of trust" and "lack of awareness, responsiveness and communication" as inflaming tensions between officers and protesters.

The Sentinel Event Review is working through months of the George Floyd protests in Seattle. In July 2021, the panel issued recommendations on SPD’s response during ‘Wave 1’ of the protest, between May 29–June 1, 2020.

At the time, they made 54 recommendations, including better communicating with protesters, improving crowd tactics, changing officers’ mindsets when responding, and "acknowledging the legitimacy" of the community.

‘Wave 2’ covers June 2–7, 2020, which ended with the establishment of the "CHOP Zone," and includes the following events:

"I hope this body of work will provide officers and policymakers in Seattle with actionable recommendations to protect the rights and safety of the Seattle community during First Amendment protected activity and help heal the rift in public trust," said Inspector General Lisa Judge. "Panelists have truly listened to one another, created space for the deep emotions these events engendered, and gained a deeper respect for each other’s perspectives and the intentions behind them."

The Seattle Office of Inspector General announced Thursday a set of recommendations for the Seattle Police Department after last summer's protests.

Panelists found a number of issues contributed to the worsening situation during the protests.

Notably, Seattle Police putting up barricades outside the East Precinct "signified a literal and figurative wall between the desires of community and their police department and city government."

But, after 11 straight days of protests, panelists understood that officers were exhausted. Reports pointed to officers working extended shifts under "considerable duress," made to stand at the barricade and manage a crowd, while the police department itself was the focal point of the protest. This stress led to more defensive behavior out of compliance with SPD policies.

72% of all protest-related uses of force by SPD were in ‘Wave 2,’ the report found.

"Based on the racially charged history of policing in Seattle and augmented by the tactics used by SPD throughout Wave 1, many protesters distrusted SPD’s motivations and rationales for conducting arrests, questioned SPD’s tactics, and doubted the good faith of SPD officers," reads the report.

A protester was arrested on June 6 for allegedly shining a laser into officers’ eyes, but he claimed he was arrested in retaliation for filming officers using pepper spray on demonstrators, including a child. That same day, complaints were filed claiming officers shoved people to the ground and struck a person with a patrol car while moving through the barricade.

This unmoving defense of the barricade culminated into an armed man driving his car into a crowd of protesters on June 7, followed by a dispersal order by SPD, then the deployment of more tear gas and blast balls against protesters. The wind blew the tear gas back at officers and into a nearby apartment building, but many who called 911 were told they could not get medical help.

The report said the CHOP Zone was "a signal that some in the community had lost all trust in the credibility and legitimacy of SPD."

The panel made 26 recommendations for Wave 2, which largely echo those of Wave 1. Among other things, they urged SPD to:

Most importantly, the panel urges SPD to work more closely with the city and relevant agencies to make sure city services still work during periods of emergency, and that people uninvolved in the civil unrest are better protected.

The panel now moves on to review ‘Wave 3’ of the protests, June 8–July 2, which includes events during the CHOP Zone.

You can read the full 73-page report on the City of Seattle website.