VANCOUVER, British Columbia - The recent deadly heat wave that struck the Pacific Northwest likely resulted in the death of more than 1 billion marine animals, according to researchers analyzing the impacts of climate change on the area.

While the official death toll on marine animals is still being tallied, Christopher Harley, a marine biologist at the University of British Columbia, says the numbers could be in the billions.

"I know that it’s a huge number, it’s hard to get your head around and people are skeptical about the number that is that big, and they should be, but you can fit 50 mussels into the palm of your hand because they’re not very big and you can fit a few thousand onto a stovetop," Harley said.

"And you can think about how many stovetops you can fit onto 1 mile of shoreline, and you can think about how many miles of shoreline there are, so when you start scaling up and you realize if most of those mussels died — even if half of those mussels died — you quickly get up into the hundreds of millions just for that one species," Harley continued.

"And then you start adding in the barnacles and the sea stars and the snails and crabs and the clams and everything else and the numbers get big real fast," said Harley.

Harley and his team are observing the Salish Sea, which covers the inland waters of British Columbia and northern Washington state, representing several thousand miles of coastline.

He added that dozens of species have been negatively impacted by the excessive heat.

When Harley went to collect samples on the second day of the devastating heat wave, he noticed the horrible stench of dead mussels covering the beach.

"There’s sort of a standard low tide smell, which you wouldn’t bottle up and sell as perfume, but this was much much worse than that," Harley explained.

Harley took thermal images which showed dead mussels sitting in temperatures as hot as 125 degrees Fahrenheit in some of the hottest parts of the beach.

Harley explained that while he feels confident much of the impacted sea life — specifically the mussels, which is the species with the greatest loss of life — will recover, if heat waves persist, there could be ripple effects on the environment that could alter the entire ecosystem for good.

Mussels are a food source for many animals that exist in the area and they help provide a habitat for many other species.

"What worries me is if we start seeing these heat waves happen more frequently, there may not be enough time for recovery before the next big die-off occurs," Harley said. 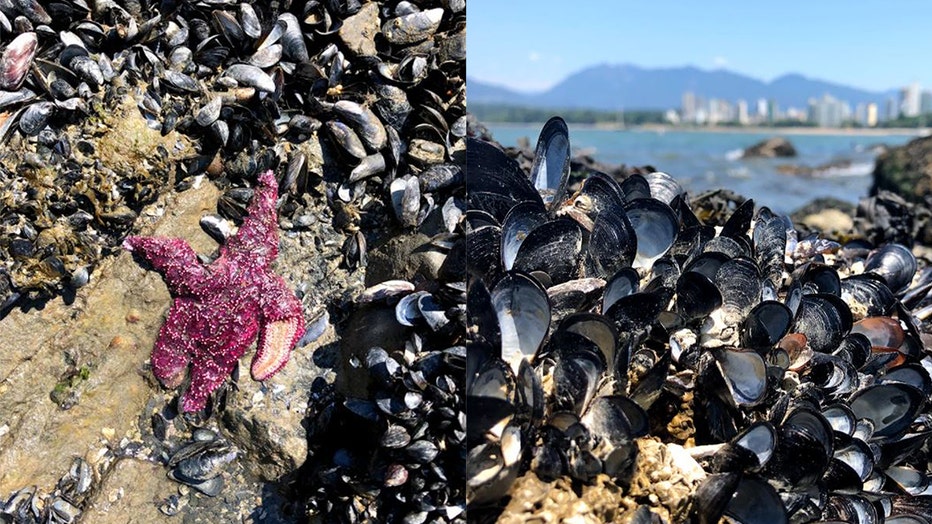 Invasive species from hotter climates have arrived over the past several years and are surviving the drastic temperature changes, while species that have lived in the areas for hundreds of years die off from changing temperatures, Harley said.

In the past 30 days, the country has set 585 all-time heat records, according to the National Oceanic and Atmospheric Administration. Of those, 349 are for daily high temperatures and 236 are the warmest overnight low temperatures, which are vital for people to recover from deadly heat waves.

There are 68 active large fires burning, consuming 1,038,003 acres of land, according to the National Interagency Fire Center. With those fires and ones in Canada, there is "one large area of smoke over much of the U.S. and Canada," NOAA said Tuesday.

On June 26, Portland, Oregon, broke its all-time heat record. It then broke it again the following day, registering a temperature of 112 degrees Fahrenheit — besting the previous record by 4 degrees. In Oregon alone, the state medical examiner on Wednesday reported 116 deaths related to the heat wave.

A separate study published on July 7 by a team of international scientists said the deadly heat wave would be virtually impossible without human-caused climate change, which they said added a few extra degrees to the record-smashing temperatures.

An international team of 27 scientists calculated that climate change increased chances of the extreme heat occurring by at least 150 times, but likely much more.

RELATED: 'Look out for the elderly': Loved ones speak out after Seattle woman dies from heat exposure

The study, from World Weather Attribution, is not yet peer reviewed but found that before the industrial era, the region's late June triple-digit heat was the type that would not have happened in human civilization. And even in today’s warming world, it said, the heat was a once-in-a-millennium event.

But that once-in-a-millennium event would likely occur every five to 10 years once the world warms another 1.4 degrees, said study authors. That much warming could be 40 or 50 years away if carbon pollution continues at its current pace, study authors said.

The team of scientists used a well-established and credible method to search for climate change's role in extreme weather, according to the National Academy of Sciences. They logged observations of what happened and fed them into 21 computer models and ran numerous simulations. They then simulated a world without greenhouse gases from the burning of coal, oil and natural gas. The difference between the two scenarios is the climate change portion.

"Without climate change, this event would not have happened," said study senior author Friederike Otto, a climate scientist at the University of Oxford.