DENVER - Earth’s protective ozone layer is slowly but noticeably healing at a pace that would fully mend the hole over Antarctica in about 43 years, a new United Nations report says.

A once-every-four-years scientific assessment found recovery in progress, more than 35 years after every nation in the world agreed to stop producing chemicals that chomp on the layer of ozone in Earth’s atmosphere that shields the planet from harmful radiation linked to skin cancer, cataracts and crop damage.

"In the upper stratosphere and in the ozone hole we see things getting better," said Paul Newman, co-chair of the scientific assessment.

The progress is slow, according to the report presented Monday at the American Meteorological Society convention in Denver. The global average amount of ozone 18 miles (30 kilometers) high in the atmosphere won’t be back to 1980 pre-thinning levels until about 2040, the report said. And it won’t be back to normal in the Arctic until 2045.

Antarctica, where it’s so thin there’s an annual giant gaping hole in the layer, won't be fully fixed until 2066, the report said. 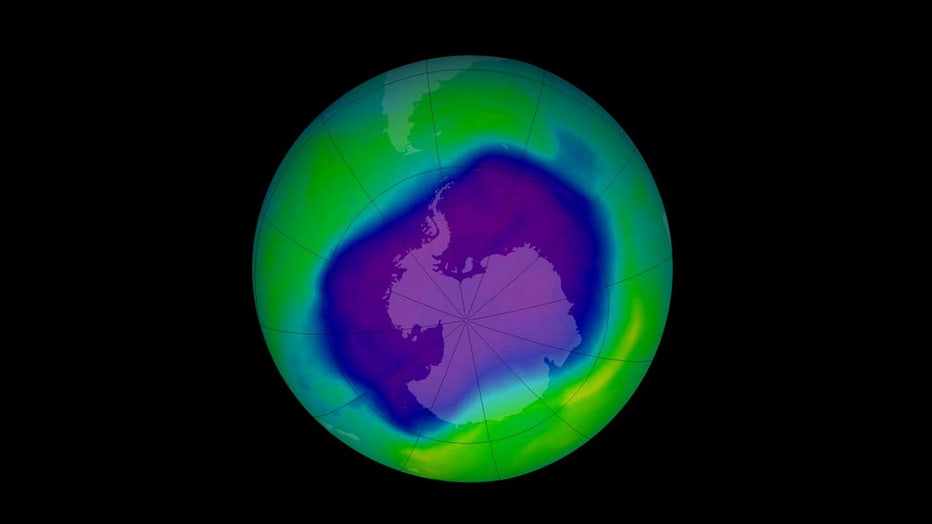 Scientists and environmental advocates across the world have long hailed the efforts to heal the ozone hole — springing out of a 1987 agreement called the Montreal Protocol that banned a class of chemicals often used in refrigerants and aerosols — as one of the biggest ecological victories for humanity.

"Ozone action sets a precedent for climate action. Our success in phasing out ozone-eating chemicals shows us what can and must be done – as a matter of urgency — to transition away from fossil fuels, reduce greenhouse gases and so limit temperature increase," World Meteorological Organization Secretary-General Prof. Petteri Taalas said in a statement.

Signs of healing were reported four years ago but were slight and more preliminary. "Those numbers of recovery have solidified a lot," Newman said.

The two chief chemicals that munch away at ozone are in lower levels in the atmosphere, said Newman, chief Earth scientist at NASA’s Goddard Space Flight Center. Chlorine levels are down 11.5% since they peaked in 1993 and bromine, which is more efficient at eating ozone but is at lower levels in the air, dropped 14.5% since its 1999 peak, the report said.

That bromine and chlorine levels "stopped growing and is coming down is a real testament to the effectiveness of the Montreal Protocol," Newman said.

"There has been a sea change in the way our society deals with ozone depleting substances," said scientific panel co-chair David W. Fahey, director of the U.S. National Oceanic and Atmospheric Administration’s chemical sciences lab.

Decades ago, people could go into a store and buy a can of refrigerants that eat away at the ozone, punch a hole in it and pollute the atmosphere, Fahey said. Now, not only are the substances banned but they are no longer much in people’s homes or cars, replaced by cleaner chemicals.

Natural weather patterns in the Antarctic also affect ozone hole levels, which peak in the fall. And the past couple years, the holes have been a bit bigger because of that but the overall trend is one of healing, Newman said.

A few years ago emissions of one of the banned chemicals, chlorofluorocarbon-11 (CFC-11), stopped shrinking and was rising. Rogue emissions were spotted in part of China but now have gone back down to where they are expected, Newman said.

A third generation of those chemicals, called HFC, was banned a few years ago not because it would eat at the ozone layer but because it is a heat-trapping greenhouse gas. The new report says that the ban would avoid 0.5 to 0.9 degrees (0.3 to 0.5 degrees Celsius) of additional warming.

The report also warned that efforts to artificially cool the planet by putting aerosols into the atmosphere to reflect the sunlight would thin the ozone layer by as much as 20% in Antarctica.