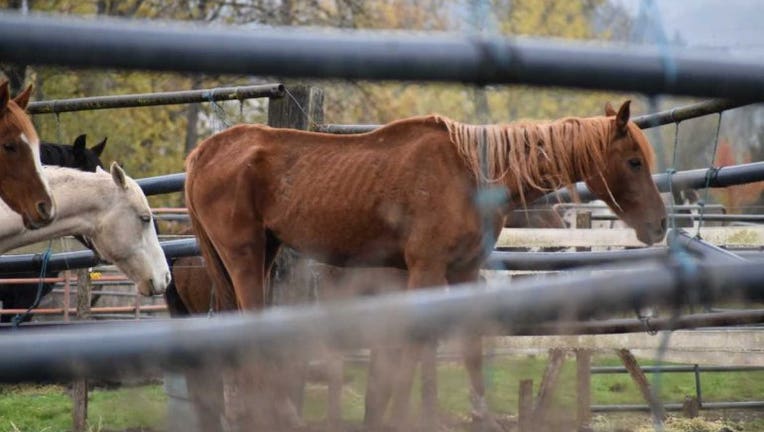 CRESWELL, Ore. -- A total of 61 horses were removed Wednesday from DeLeonardo Training Center near Eugene.

The Register-Guard reports property owner Gwenyth Davies was arrested and cited in lieu of custody for second-degree animal neglect.

The sheriff's office says Davies, who resides at the property with her husband, Michael DeLeonardo, has had previous contacts with Animal Services regarding horses in poor condition in 2018.

As a result of those contacts, Davies brought the care of those horses up to minimum care standards.

The current investigation started when the county's animal services received photos in mid-October of horses boarded at Davies' property that appeared neglected.

“Ms. Davies is known to Animal Services,” said Lane County Senior Animal Welfare Officer Bernard Perkins. “While we typically focus on voluntary compliance and education, the level of alleged neglect and Ms. Davies’ history of violations goes far beyond what is acceptable in our community. We are grateful for the support of the Sheriff’s Office and District Attorney in the pursuit of criminal charges.”