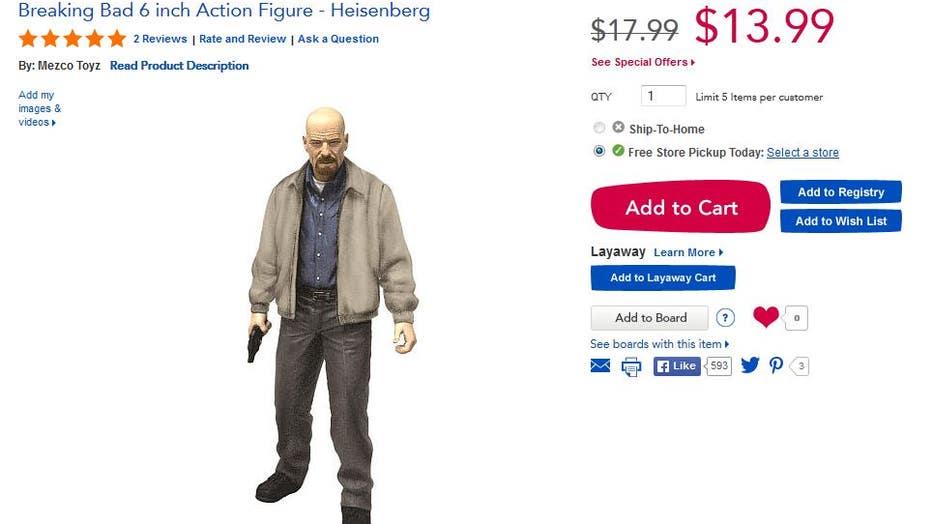 (CNN) -- "Breaking Bad's" Walter White may have cleverly dodged authorities during his career as a drug kingpin, but his action figure hasn't dodged the wrath of a Florida mother.

Susan Schrivjer, a mother from Fort Myers, launched a petition in early October to have White -- and other "Breaking Bad" action figures -- removed from Toys R Us. As of Monday morning, the Change.org request has received more than 2,000 signatures.

In the petition, Schrivjer -- who wrote the appeal under the name "Susan Myers" -- gets right to the point.

"Toys R Us is well known around the world for their vast selection of toys for children of all ages," she wrote. "However their decision to sell a Breaking Bad doll, complete with a detachable sack of cash and a bag of meth, alongside children's toys is a dangerous deviation from their family friendly values."

In an interview with CNN affiliate WFTX of Fort Myers, Schrivjer expanded on her thoughts.

"Kids mimic their action figures, if you will," she told the station. "Do you want your child in an orange jumpsuit?"

Signers to her petition agree.

"It's sick that a company would design kids toys that glorify the making of meth. It's just as sick to sell them," wrote Jaime Keasler.

"While I support free enterprise and there may be a market for these figures, this is a children's toy store," said Monica Tessmer. "It shouldn't even be a question that this is inappropriate. Not a smart move Toy r Us."

The action figures include White -- the chemistry teacher turned meth lord -- and his assistant, Jesse Pinkman, in hazmat suits, as well as White as his gun-toting alter ego, Heisenberg.

It's not "Breaking Bad" itself, Schrivjer hastens to add. She says she was a fan of the show.

"I thought the show was great," she said. "It was riveting."

But she draws the line at seeing the characters in Toys R Us. Her goal? "Just to get those taken off the shelf and put them in an appropriate store."

Toys R Us has yet to respond to a CNN query.

In a statement to WFTX, the toy giant said, "The products you reference are carried in very limited quantities and the product packaging clearly notes that the items are intended for ages 15 and up. Items from this TV series are located in the adult action figure area of our stores."