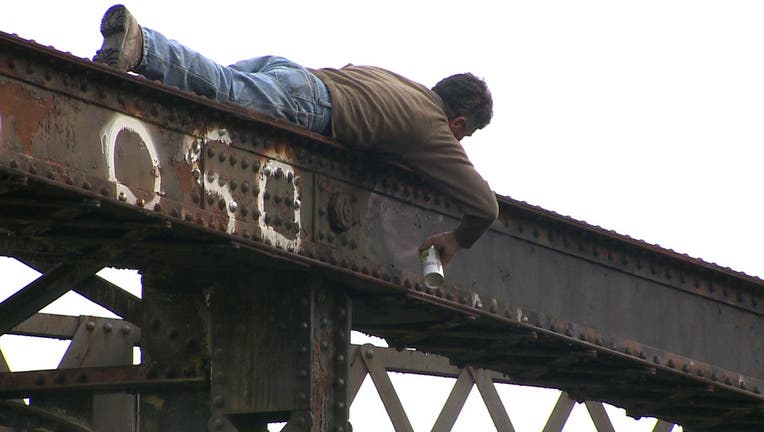 Dave Thomas uses black paint to cover over a piece of graffiti he put up on the Oso train trestle decades ago. (Photo: KCPQ-TV)

For 36 years, the old train trestle along State Route 530 in Oso has had a message painted on the top: "Welcome to Oso -- party town."

Dave Thomas said Tuesday that he and a group of friends painted that message when they were teenagers.

But it was something special to others who live in Oso and have grown used to seeing those words on the train trestle.

So when Thomas climbed to the top of the trestle and used black paint to cover over the words "party town USA," his action wasn't welcomed by all.

"He destroyed a piece of Oso history by what he just did," said Gayle Moffett, who lives across the street. "It breaks my heart. We’ve been through enough already."

Thomas said that since the devastating mudslide that took at least 41 lives, Oso could never be considered a party town. He also didn't want President Obama to catch a glimpse of the sign as his motorcade drove by on Tuesday.

"It may be a small thing to some people, but to the people up here it meant something," said Moffett. "Nobody has ever messed with that before."

The president did drive by the trestle twice, though it wasn't known if he looked at the small bridge that now simply says, "Welcome to Oso."

But at least one neighbor vowed to climb up there and put "party town" back on the trestle.

"It will be back there by the end of the weekend."