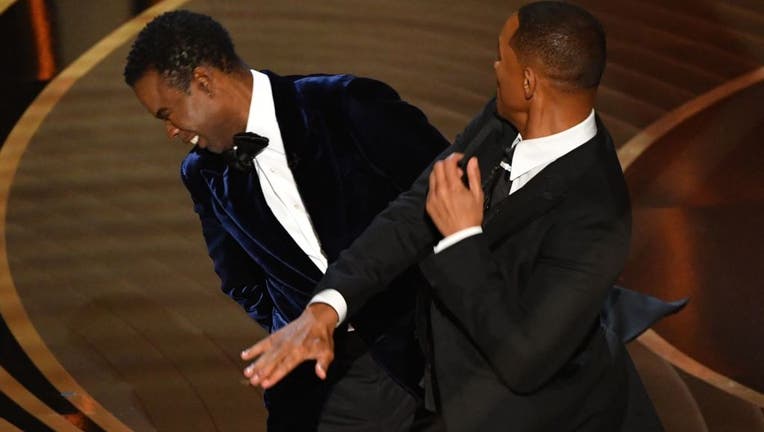 TOPSHOT - US actor Will Smith (R) slaps US actor Chris Rock onstage during the 94th Oscars at the Dolby Theatre in Hollywood, California on March 27, 2022. (Photo by Robyn Beck / AFP) (Photo by ROBYN BECK/AFP via Getty Images)

LOS ANGELES - After expediting a meeting by ten days to discuss the disciplinary actions Will Smith will face after slapping Chris Rock on the Oscars stage, The Academy of Motion Picture Arts and Sciences has reached a decision.

The Academy's Board of Governors met Friday and after the vote, the Academy President and CEO said, "The Board [of Governors] has decided, for a period of 10 years, from April 8, 2022, Mr. Smith shall not be permitted to attend any Academy events or programs, in person or virtually, including but not limited to the Academy Awards."

Before presenting the award for Best Documentary Feature on Hollywood’s Biggest Night on March 27, Rock made a joke about Smith’s wife, Jada Pinkett Smith.

"Jada, ‘GI Jane 2,’ I can’t wait to see it," Rock said in front of the Oscars audience. Pinkett Smith rolled her eyes in response. In 2018, the actress was diagnosed with alopecia, which is something Rock was reportedly unaware of.

After seeing his wife’s response and with cameras rolling during the live event, Smith stormed to the Oscars stage and slapped Rock across the face.

The shocking moment immediately went viral and set social media ablaze. Roughly 24 hours after the slap that was seen and heard across the globe, James Corden even made an Encanto parody called "We Don’t Talk About Jada," during his late-night talk show.

RELATED: Most Americans back Chris Rock over Will Smith, Twitter data shows

The meeting to discuss Smith’s punishment, initially scheduled for April 18, was moved up after Smith formally withdrew from The Academy on April 1.

A spokesperson for Smith released the following statement when the "King Richard" actor announced his resignation from The Academy, which read in part:

"I have directly responded to the Academy’s disciplinary hearing notice, and I will fully accept any and all consequences for my conduct. My actions at the 94th Academy Awards presentation were shocking, painful, and inexcusable. The list of those I have hurt is long and includes Chris, his family, many of my dear friends and loved ones, all those in attendance, and global audiences at home."

RELATED: Will Smith resigns from The Academy amid Chris Rock Oscars slap backlash

The Academy then released the following statement in response:

"We have received and accepted Mr. Will Smith's immediate resignation from the Academy of Motion Picture Arts and Sciences. We will continue to move forward with our disciplinary proceedings against Mr. Smith for violations of the Academy’s Standards of Conduct, in advance of our next scheduled board meeting."

Days prior to resigning from The Academy, Smith issued a public apology to Rock, saying, "I was out of line and I was wrong."

Officers with the Los Angeles Police Department were ready to arrest the megastar after the assault. However, Rock has declined to file criminal charges against Smith.

The legendary comedian is being praised and has received support from Hollywood for how handled the situation.

In 2020, he revealed he was diagnosed with nonverbal learning disorder as an adult, telling The Hollywood Reporter the condition means he has challenges interpreting nonverbal signals in social situations.

Rock is currently on the road for his "Ego Death" tour, which is his first stand-up comedy tour in five years.