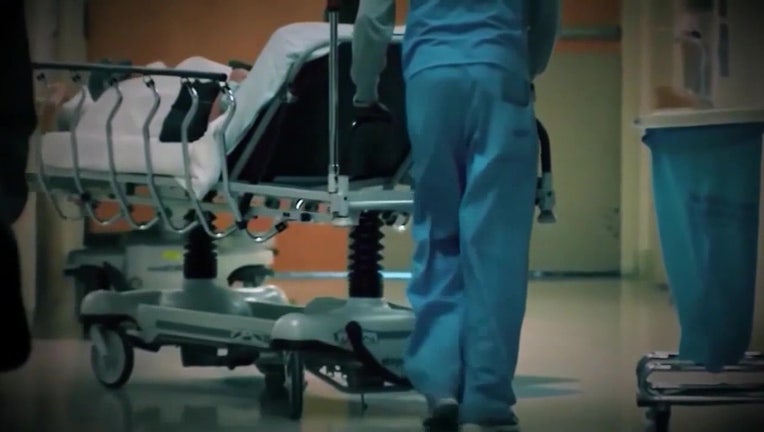 SALEM, Ore. - Oregon was once the poster child for limiting the spread of the coronavirus, after its Democratic governor imposed some of the nation’s strictest safety measures, including mask mandates indoors and outdoors, limits on gatherings and an order closing restaurants.

But now the state is being hammered by the super-transmissible delta variant, and hospitals are getting stretched to the breaking point. The vast majority of hospitalized COVID-19 patients are unvaccinated.

The intensive care unit at Salem Hospital in Oregon’s capital city is completely full, with 19 of the 30 beds occupied last week by COVID-19 patients, the youngest only 20 years old. It’s the same at a hospital in Roseburg, a former timber town in western Oregon. A COVID-19 patient died in its emergency room last week while waiting for an ICU bed to open, an event that was deeply distressing to the medical staff.

"We need your help, grace and kindness," the staff of CHI Health Medical Center said on Facebook. They are reeling "from the extraordinary onslaught of new cases and hospitalizations."

Oregon is among a handful of states, including Florida, Arkansas and Louisiana, that have more people hospitalized with COVID-19 than ever before.

Some 1,500 guard troops have been dispatched to hospitals around the state by Gov. Kate Brown, who warned of the "seriousness of this crisis for all Oregonians, especially those needing emergency and intensive care."

On Friday, only 39 adult ICU beds were available statewide. More than 90% of Oregon’s adult hospital and ICU beds are full.

Lisa, a nurse in Salem Hospital’s ICU, told a small group of visiting journalists Friday that she is both frustrated and sad to see a record number of COVID-19 patients, even though vaccines are widely available. She spoke on the condition that her last name not be used, because the pandemic and how to fight it have become highly politicized.

"We’ve been dealing with the second wave when we thought — I guess we hoped — it wouldn’t come. And it’s come. And it’s harder and worse, way worse, than before," she said. Hours earlier, a COVID-19 patient died in the ICU.

As she spoke, a patient’s heart monitor beeped. A mechanical ventilator occasionally added a higher-pitched tone. Fifteen of the COVID-19 patients were on ventilators. The hospital’s wellness department, which normally recommends yoga and deep breathing for relaxation, recently set up a booth and filled it with dinner plates for a different kind of stress relief.

She said one advantage over last year’s surge is that she’s vaccinated, so she is not as scared of dying. Another improvement is that there are plenty of masks, gowns and other personal protective equipment.

Other than the beeping monitors, the ICU was quiet. The COVID-19 patients are heavily sedated and behind closed doors. Outside their rooms stand poles draped with IV bags, the tubes running through a crack in the door so nurses can change the bags without exposing themselves to the virus.

Beds outside the unit can be upgraded to ICU-level care by adding monitors and life-support machines, said Martin Johnson, the ICU medical director. A rapid-response team composed of an ICU nurse and an ICU-level respiratory therapist provide backup support, he said, stressing that the hospital can still take in patients.

After conferring on each patient’s medical status, ICU team members, who have spent a year and a half trying to keep COVID-19 patients alive, stand in a circle, sometimes holding hands, and try to come up with positive things to say.

"Sometimes it’s, ‘Their oxygen needs are less, or their fever is gone,’" Johnson said. "At other times, it’s ‘The patient opened his eyes and squeezed my hand.’"

When there is no improvement, staff will instead express gratitude for each other or for the support of patients’ relatives.

Oregon’s early success against the virus may have helped fuel the delta variant’s toll on the state, because the aggressive measures to curb the first surge left many population pockets with no immunity. And though some 72% of adults statewide are at least partially vaccinated, that number drops to less than 50% in 10 of Oregon’s 36 counties.

Compounding the problem: Oregon has, along with Washington state, the lowest per-capita supply of hospital beds in the nation. The two states each have only 1.7 beds per 1,000 residents, according to the Kaiser Family Foundation, a nonprofit focusing on national health issues. South Dakota ranks first, with 4.8 beds per 1,000.

It will be a race against time to see if Oregon’s health care system can withstand the current surge before it eases off. Oregon Health & Science University predicts the peak will be Sept. 7.