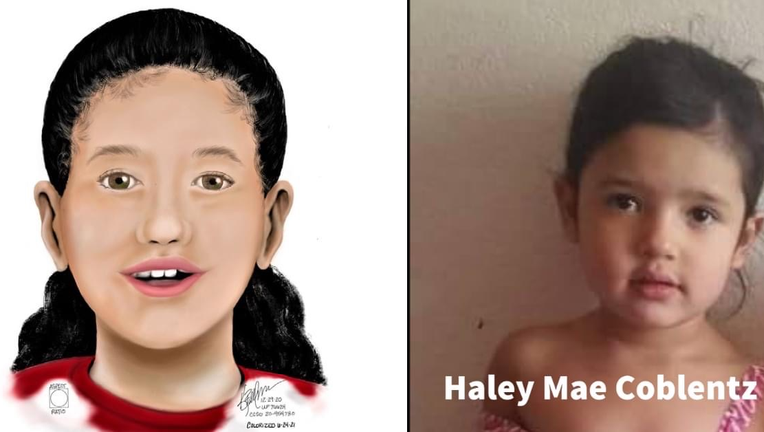 Photos from Oregon State Police. The first image is a sketch of Haley and the second image is her actual (undated) photo

OREGON STATE - Oregon State Police have announced that they have identified the remains of a child found stuffed into a duffle bag and left in the forest last year.

On Dec. 10, 2020, detectives with the Oregon State Patrol Major Crimes division responded to the H.B. Van Duzer Scenic Corridor in Lincoln County, Oregon, for the report of human remains discovered just outside the rest area.  A person walking in the area discovered the remains of a female child hidden inside a duffle bag.

It appeared the child was dead in the duffle bag for about one to two months before she was discovered.

A year later, investigators identified her as 9-year-old Hayley Mae Coblentz. She was not reported missing at the time of her death.

Based on the level of decomposition, it appeared she had been deceased between 30-60 days before her discovery.

Troopers did not reveal if they knew her cause of death.

Coblentz was born in Colorado and was living with her mother and her mother's girlfriend in multiple places in Oregon and the Pacific Northwest for the last six years.

Oregon State Police and the Detroit FBI were able to track down Coblentz's mother, 29-year-old Shawna Browning, and her girlfriend, 34-year-old Lauren Harrison, in Detroit.

Both were arrested and charged with aggravated murder. They are being held without bail.