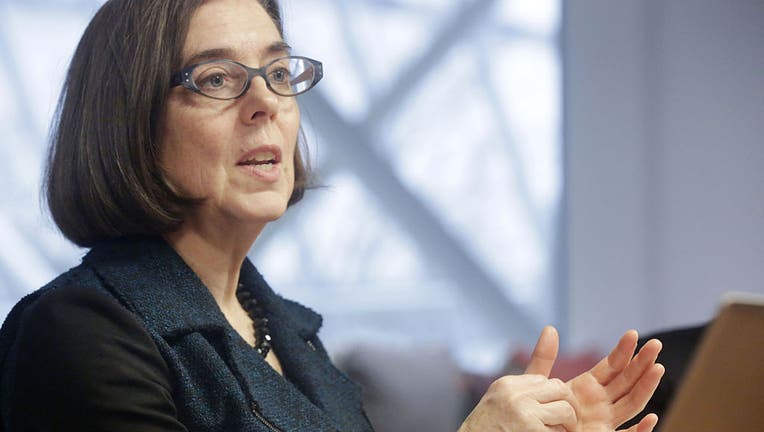 Kate Brown, governor of Oregon, speaks during an interview in Portland, Oregon, U.S. on Wednesday, Jan. 20, 2016. Brown, a Democrat, joined the state House of Representatives in 1991, was later elected to the Senate and served as secretary of state s

OREGON - In 1994, Kyle Hedquist led a teenager down a remote logging road, then shot her in the back of the head because he feared she might tell police about burglaries he’d committed.

This month, Oregon. Gov. Kate Brown granted clemency to Hedquist, who was serving a life sentence without parole after being convicted of murdering Nikki Thrasher when he was 17. Brown’s act is unleashing a storm of criticism from prosecutors and law enforcement.

"The executive clemency granted by Gov. Brown in this case is shocking and irresponsible," Douglas County Sheriff John Hanlin said Tuesday in a statement. Hedquist, now 45, was convicted in Douglas County Circuit Court in 1995.

On Tuesday, Brown defended her clemencies, comparing them to President Joe Biden’s granting of clemency Tuesday to 78 people, though those were all for nonviolent crimes.

"Teenagers, even those who have committed terrible crimes, have a unique capacity for growth and change," Brown said in social media posts in which she applauded Biden’s action, adding: "We are a state and a nation of second chances."

The U.S. Supreme Court, in a 2012 ruling, said only the rare, irredeemable juvenile offender should serve life in prison, but that applies in federal cases.

Some two dozen states have banned sentencing juveniles to life without parole, according to the Washington, D.C.-based Sentencing Project, which advocates for humane responses to crime. The Democrat-dominated Oregon Legislature passed such a law in 2019, but the state Supreme Court has ruled it’s not retroactive.

The clemency of Hedquist has fueled Republican complaints that Brown, a Democrat who is not running for reelection this year because of term limits, is soft on crime.

"As with many others, the facts of this case are outrageous and brutal," Oregon Senate Republican Leader Tim Knopp said Tuesday. "The Governor continues to let violent criminals out of prison, and Democrats in the majority remain silent."

However, Brown said she has denied most clemency requests.

"Clemency is an action I reserve for individuals who have demonstrated that they have made incredible changes in their lives to rehabilitate themselves, take accountability for their crimes, and dedicate themselves to making their communities a better place," Brown said.

Hedquist wrote about caring for the dying inmates in a piece that was awarded "honorable mention in memoir" in PEN America’s 2019 Prison Writing Contest.

"I couldn’t have known all those years ago that death would bring my humanity back," Hedquist wrote. "So I sat, I listened, their teary-eyed regurgitation of their crimes burned my ears, they left a bitter taste in my mouth as I consumed the confessions ... but somehow just being with them and listening lightened their burden before death stepped in to take them."

This month, Hedquist was released to the Salem home of a former prison chaplain after a suitable place could not be found for him in Douglas County, where Hedquist was from.

"Hedquist tricked the victim into driving him to a rural Douglas County location where he shot the victim execution-style in the back of the head and dumped her body along the road," Clarkson and Kast said. "Hedquist admitted killing her to eliminate a witness in hope of preventing his own capture."

Brown accused "several district attorneys" of scoring political points by stoking public fears in these cases. Oregonians granted clemency have demonstrated they have turned their lives around and pose a low risk to the public, she said.

"If Mr. Hedquist violates any terms of his post-prison supervision, the governor can revoke his commutation," Merah said.

Since taking office in 2015, Brown has granted 1,148 sentence commutations — 963 of them to minimize the spread of COVID-19 in prisons, Merah said. Also among the total were 41 commutations for inmates who fought wildfires and 72 who committed crimes as juveniles and were sentenced to more than 15 years. Brown also granted 63 pardons. Commutations reduce prison terms, while pardons forgive defendants of crimes.

The number of clemencies from governors varies widely across the nation.