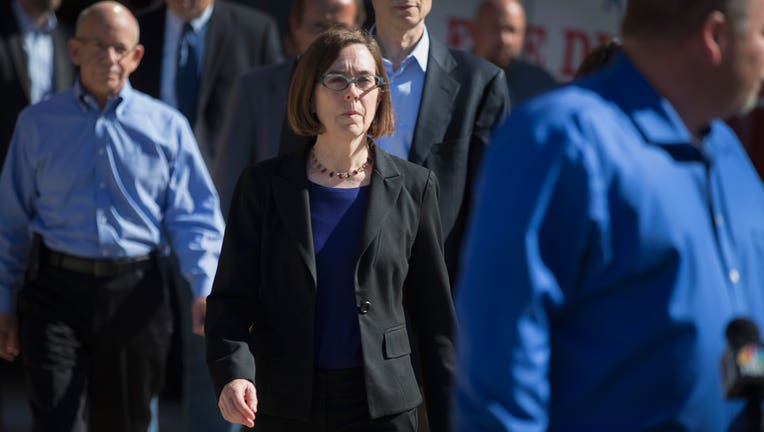 Oregon Gov. Kate Brown said Wednesday she's willing to extend the legislative session and mobilize the state police if Senate Republicans follow through with a threat to block a vote on a sweeping climate plan.

"I am prepared to use all resources and tools available to me as Governor to ensure that Oregonians are being served by their leaders," she said in a statement. "I am in close communication with Oregon State Police and my office is making preparations for a special session."

"If you send the state police after me," Sen. Brian Boquist told Senate President Peter Courtney, "Hell's coming to get you."

Her statement heightens tensions with Senate Republicans, who said earlier this week that they are "prepared to take action to stop" what could become the nation's second statewide cap and trade program.

"Walking out is part of the conversation because the governor is not willing to move on her position on the bill," said Baertschiger, from Grants Pass. "She is only representing Portland and the environmental community, not rural Oregonians."

The back-and-forth comes as truckers and loggers from around the state returned to the Capitol on Wednesday to protest cap and trade, a free market solution to lower industrial greenhouse gas emissions. Cap and trade is a top priority for Democrats, who view the program as a way to meet the state's emission goals while raising money to invest in a transition to green technology.

Democrats in Oregon control both the House and the Senate. The GOP has previously used walkouts as a way to slow the legislative process.

Republicans walked out of the Senate earlier this session in protest of a school funding tax package, denying the chamber enough lawmakers to continue with a vote. The sergeant-at-arms of the Oregon Senate was ordered to search the Capitol for Republican senators who were refusing to attend. The standoff lasted four days, until the governor struck a deal to table legislation on gun control and vaccine requirements.

As part of that deal, Republicans said they wouldn't walk out again or delay votes through other legislative procedures. Although Brown could have deployed the Oregon State Police to physically bring members back to the chamber, she chose instead to strike a deal, saying at the time that she wanted to maintain decorum and have an "orderly session."

But civility seems to be out the window as session nears its end, and Republicans have become increasingly agitated with a Democratic supermajority that plans to push through huge legislative priorities over the next two weeks addressing affordable housing and climate change.

Brown called the Republican threat of a walkout "a slap in the face," saying conservatives have turned "their back on respectful dialogue just because they don't agree with others in the conversation."

"I'm disappointed in the Senate Republicans' indications of a walkout, which would silence their constituents while stifling democracy," Brown said in a press release. "It's not only dishonest, it violates the oaths they took to speak for their constituents as well as the word they gave to their colleagues and to me."

Sen. Brian Boquist, a Republican from Dallas, pushed back against the governor's threats to mobilize the state police if a second walkout occurs.

"If you send the state police after me," he told Senate President Peter Courtney, "Hell's coming to get you."