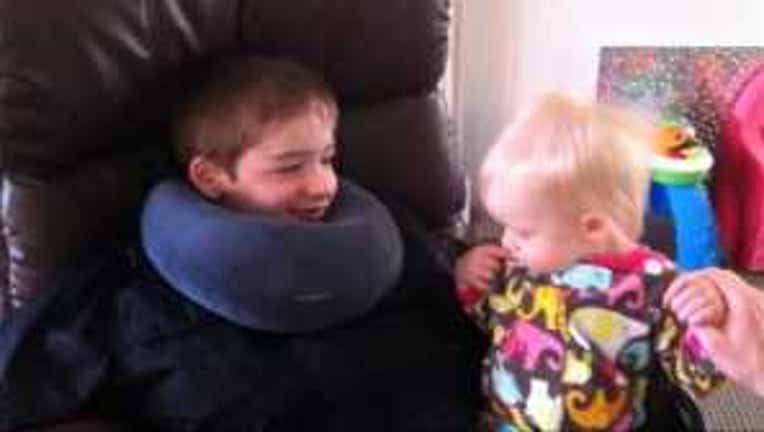 Alex Echols, left, is severely autistic and is given medical marijuana to control his rage.

PORTLAND -- An Oregon family has turned to medical marijuana to manage their son's severe autistic rage.

"It was indescribable, it was horrifying," said Jeremy Echols, father of 11-year-old Alex. "When you've got no other options, are you honestly gonna say no?"

Alex Echols is severely autistic, and his doctor said Alex's self-destructive behavior is brought on by Tuberous Sclerosis, a rare, genetic disorder that affects about 50,000 people in the United States. The disorder causes unregulated growth of non-malignant tissue in organs. In Alex's case, his neurologist said growths in Alex's brain have led to seizures and autism.

"Alex cannot communicate using words and that leads to behavior that is very frustrating for him and for those caring for him," said Dr. Colin Roberts, a pediatric neurologist at Doernbecher Children's Hospital in Portland.

On the day Alex was born, Jeremy Echols said he and his wife were full of hope. Until six weeks later, when their baby had his first seizure.

"We didn't know he'd be autistic at that time," he said. "I think he was three when he started hurting himself though."

Echols said by the time Alex was 5, he exhibited intense, self-directed rage. Echols showed us home videos of the rage. He said they videotaped the episodes to show doctors the injuries were self-inflicted.

Echols said Alex head-butted anything he could. He said the boy bruised his forehead so badly, the blood would drain down until Alex's entire face was black and blue.  His parents got him a helmet to protect his head, swaddled him like a newborn and tried mood-altering drugs to control the behavior, with little success.

Alex's daily, violent behavior became the Eugene family's new normal. When he was 8, the Echols made the heartbreaking decision to move Alex into a state-funded group home.

"It was like we were throwing him away, like we were giving him to somebody else and saying, 'Sorry buddy, you're not part of the family anymore,'" he said. "It was pretty rough."

"We tried the (marijuana) brownies, we tried butter for cookies," he said.

Alex is now one of 58 minors currently protected under the Oregon Medical Marijuana Act. While autism is not a qualifying medical condition like cancer or severe pain, in Alex's case, his seizures were.

And after a few months of treatment, the Echols said they saw a dramatic improvement.

"He went from being completely, yelling, screaming, bloodying his face, to within an hour, hour and a half, he would be playing with toys, using his hands," he said. "Something that at that time was almost unheard of."

Echols said Alex's group home will not administer the marijuana, so, about three times a week off-site, his parents give Alex a liquid form of the drug by mouth.

The dosage is up to the parent and Oregon law does not require a doctor to monitor a child's medical marijuana use. In fact, Alex's neurologist didn't know about the alternative treatment, until we told him.

While Dr. Roberts did not condone the treatment, he said he understood the family's desire to help their child.

"Alex's parents are wonderful people." he said. "I certainly am very much with them in my desire to help Alex. All of us want to help Alex."

The American Academy of Pediatrics has circulated a resolution that opposes the use of medical marijuana in children. Dr. Sharon Levy, an assistant professor of pediatrics at Boston's Children's Hospital and chairwoman of the AAP's committee on substance abuse, told FOX 12 marijuana is toxic to children's developing brains. She also said enough isn't known about the drug's long-term effects.

The Echols also said they're not advocating the use of medical marijuana for all autistic children, but they say those who walk a mile in their shoes may not consider the treatment so extreme.

The Echols have set up a Facebook page that chronicles Alex's journey. You can find their blog at www.facebook.com/alex.autism.rage.mmj.