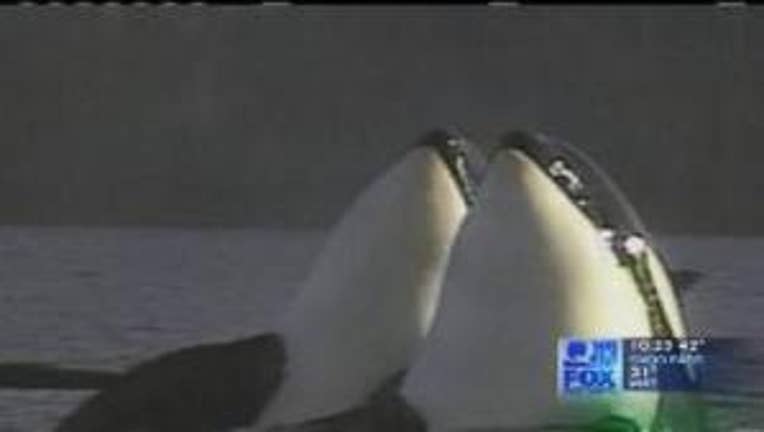 Anne Stateler, or Orca Annie as she likes to be called, has spent the last 17 years tracking Southern Resident Killer Whales and recording the sounds they make underwater as they pass her home.

She buried a heavy duty cable under the sand into Puget Sound that's attached to a hydrophone and connected to a computer in her home.  The microphone captures the clicks, whistles and calls whales make to communicate and hunt.

"Sound is their world. They are sonic creatures. We're visual so sometimes it's difficult to understand the impact of our manmade noise on these whales," Stateler said.

There's no argument orcas are acoustic animals. Sound to them is everything. They use sonar to navigate and hunt for fish, but when boats get too close, research indicates engine noise interferes with those processes making it much more difficult for the Orcas to hunt a dwindling population of Chinook salmon.
In the summer of 2009, the National Marine Fisheries Service recommended new restrictions on all vessels, including whale watch boats. The rules would keep them a minimum of 200 yards from the whales and completely close down a half-mile of water along the west side of San Juan Island from May to September each year.

That proposal ignited outrage among whale watch operators and caused the public comment period on the new rules to be extended for over a year, as boat owners and conservation groups argued over the research and its impact.

"The research is quite compelling. I know that's what some people point to and say they don't agree with that research finding but it's data, it's there," Stateler said.

Senator Maria Cantwell chaired the committee that provided more than $2 million for the research that found boat noise can negatively impact Orcas. She said the whales must be protected and that she's confident whale watch operators will do whatever is required.

"We want the strongest regulations possible. If science says this is what we need to do then I think everybody in the community will go along with what is important for science," Cantwell said.

The plan is now in the hands of the Office of Management and Budget in Washington, D.C.  They would only tell us the rules are under review and that we were welcome to check back on their progress, but time is growing short as whale watch season starts May 1. Local fisheries staff says they are ready to put the new regulations into effect.

"As soon as the regulations are cleared and ready to be published we will publish them.  They'll go into effect and killer whales will have that much greater degree of protection," says Brian Gorman.

Orca Annie will continue listening to the Orcas. She just hopes the government will listen to her and others who say we need to do everything in our power to protect these animals.

"As powerful as these whales are they're incredibly fragile and their fate is in our hands. We all need to ensure their survival," Stateler said.

NMFS officials expect a decision from the Office of Management and Budget by April 26.