SEATTLE -- One year from today, we should have flying cars, power-lacing shoes and everyone's favorite... hoverboards.

That's if -- and this is a big IF -- Hollywood and Marty McFly got their predictions right.

October 21, 2015 is the day McFly, Doc Brown and their time-traveling DeLorean arrive to the future in the classic film, Back to the Future II.

The film is an interesting look at what some predicted, or hoped, the future would turn out to be in 2015. Some things, like video games without hands and one click-payments, were right on track. Others, like flying cars and a world crowded with holograms, seem a few years off at least.

Below we list our Top 5 futuristic items featured in Back to the Future II. While they might not be here yet, we still have a year.

UPDATE: Back to the future shoes may be in the works for next year!

4. Biometric payment keypad -- We're almost there on this one. If Back to the Future II has it right, we'll soon be paying for everything  with the touch of a finger. Thumbprint touch-pads are here now, and it doesn't seem like long until we'll be swiping our thumb at checkout.

3. Jaws 19 and the Holomax Theater -- Holomax theaters and the 18th sequel of Jaws seem a bit far off.  We only have four Jaws films: Jaws, Jaws 2, Jaws 3-D and Jaws: The Revenge. And while 3-D movies have greatly improved since the 80s, holographic films aren't on the horizon anytime soon. In fact, outside of the holographic Tupac performance at Coachella a few years ago, holograms seem pretty few and far between. 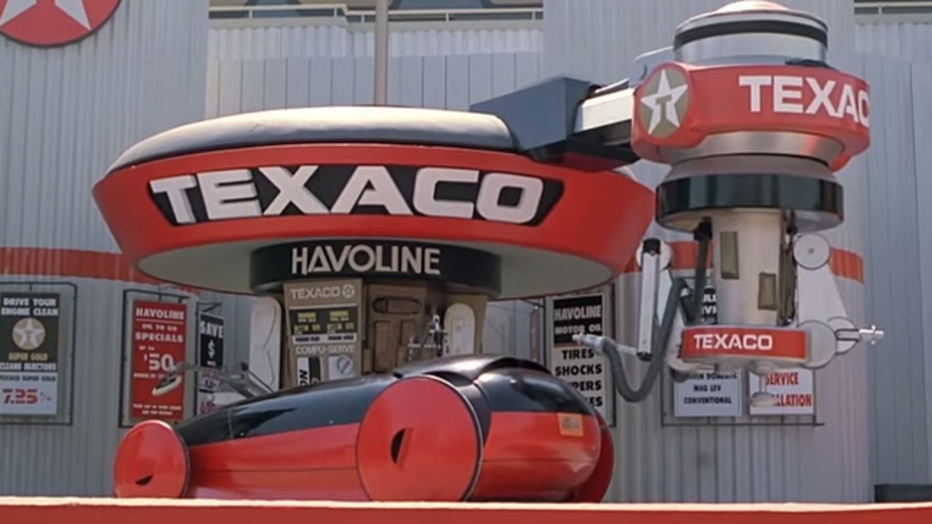 2. Flying Cars -- To be fair, Back to the Future II isn't the only film that wrongly predicted flying cars. The Jetsons, The Fifth Element, Total Recall and many more thought we'd be flying through the sky on our way to work. Though its been promised for years, flying cars may be coming soon. Several companies are working on hybrid models that can both drive and fly. But noise, the FAA and fuel problems seem to be holding the prototypes back. Who knows, maybe in the next 25 years?

1. The Hoverboard -- If there's one thing from Back to the Future II that sticks in the public's consciousness, it's that darn hoverboard. Fake video released a year ago featuring the board and Back to the Future star Christopher Lloyd got everyone so excited that Tony Hawk had to come out and apologize for faking a hoverboard ride. While the extreme anti-gravity technology of Back to the Future II's hoverboards may not be here, there are real hoverboards slowly cruising over real surfaces. The early prototypes are a long way from Marty's pink cruiser, but it's a start at least.