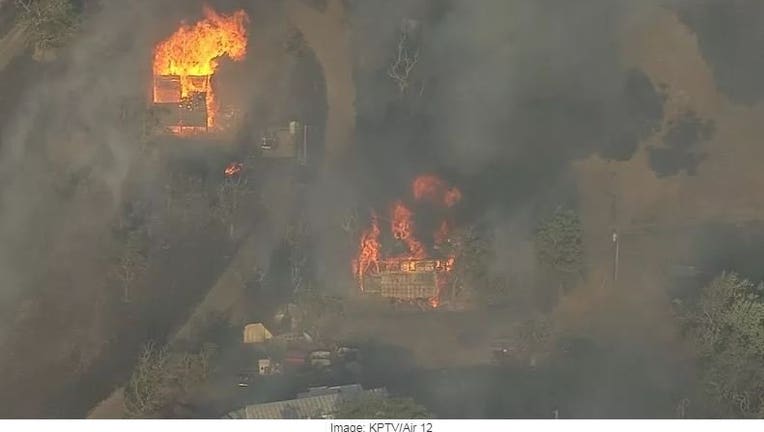 PORTLAND, Ore. (AP) — A fast-moving fire fueled by gusting winds in the Pacific Northwest killed one person, forced dozens of households to evacuate and prompted Oregon Gov. Kate Brown to declare a state of emergency Wednesday.

The flames near the city of The Dalles started Tuesday and expanded Wednesday to more than 70 square miles as the fire spread into vast fields of wheat while desperate farmers tried to salvage their crops in the midst of the harvest season.

One person was found dead Wednesday a short distance from a burned-out tractor. The person was likely trying to use the heavy farm machinery to create a fire break to hold back flames, the Wasco County Sheriff's Office said in a statement.

Firefighters crept into the fields in water trucks and attempted to douse the leading edges of the fire from behind as it burned through acres of wheat, with everything behind the flames charred black.

The news of the fatality also came as authorities on Wednesday ordered additional mandatory evacuations in the small communities of Moro and Grass Valley.

The blaze about 80 miles east of Portland doesn't bode well for a Pacific Northwest fire season that's expected to be worse than normal, with drought conditions in many areas and above-average temperatures forecast through September, the center said.

One home has been destroyed, and a burned transmission line caused power outages Wednesday.

It comes as other states across the American West, including California and Colorado, have struggled with massive blazes that have torn through land gripped by drought.

In Oregon, very low humidity, high temperatures and winds gusting up to 30 mph made the flames explosive in thin grasses and wheat fields, said Robin DeMario, a spokeswoman for the Northwest Interagency Coordination Center.

Firetrucks tried to spray water on the leading edges of the fire as it burned through acres of wheat, with everything behind the flames charred black.

"These light fuels go up very quickly," DeMario said. "The grassy stalks are very dry, they have lost the moisture in those stalks, and so if a fire start begins, we call it 'flashy fuels' because it burns very fast and very hot."

It burned in the western end that's home to the Columbia River Gorge National Scenic Area, which attracts more than 3 million tourists a year and holds North America's largest concentration of waterfalls.

The landscape further east along the river transitions to grasslands and flat, open vistas dotted with wheat fields — where the fire was burning Wednesday.

Elsewhere in the state, several fires started by lightning over the weekend burned as temperatures flirted with triple digits.

One in southern Oregon forced two houses to evacuate and 31 more homeowners to get ready to flee Wednesday after the flames spread near the California border.

Another blaze about 200 miles (322 kilometers) east of Portland got tamped down after farmers and ranchers used their heavy equipment to help create lines to contain the flames. Some fences and horse corrals burned, but no homes were lost, said Melissa Ross, Morrow County Sheriff's Office spokeswoman.

"In some instances, it was very close (and) if not for all those who turned out to help, the end of this story would have been very different," she said.

In California, a deadly forest fire was spreading west of Yosemite National Park, keeping a key route into the park shut down during tourist season and forcing communities to evacuate. But the park's trails, campgrounds, restaurants and lodges are open, though smoke is polluting the air and limiting visibility.