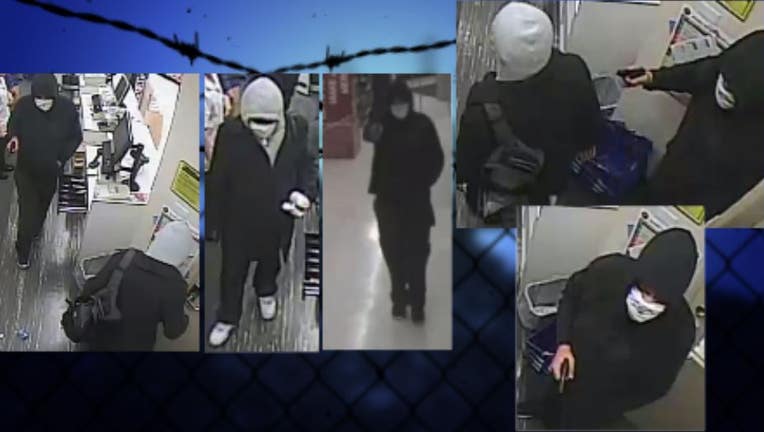 CAPTURE UPDATE January 15, 2016 -- A 15 year old teen suspected in a Seattle pharmacy robbery and who may be linked to others in the area was arrested at his home by Seattle Police SWAT on Friday morning. Seattle Police say after the robbery in Ballard, detectives began working with other local agencies and found there had been similar robberies in Kirkland, Bellevue and Tacoma. Detectives were able to identify the 15 year old boy who calls himself “Young Codeine King”. He was booked into the Youth Services Center for investigation of robbery. Detectives are still trying to identify the second suspect. If you know who he is, call an anonymous tip into: CRIME STOPPERS: 1-800-222-TIPS You must call the Crime Stoppers hotline with your tip to be eligible to receive a cash reward for information leading to a fugitive’s arrest. CLICK HERE for information on how to TEXT A TIP to Crime Stoppers FUGITIVES UPDATE December 11, 2015 -- Detectives say the same suspects -- both confirmed to be males -- have now hit three different stores since November 28th in Seattle, Burien and Tacoma. Above are new photos detectives have released. FUGITIVES WANTED IN SEATTLE December 4, 2015 -- Seattle Police are hoping you can help solve an armed takeover robbery at a pharmacy in Ballard last weekend that was terrifying for the employees inside the Walgreen's store, when two suspects forced them into the back at gunpoint and stole codeine and Xanax. It happened about 3am on Saturday morning. There have been a whole slew of similar robberies all over Western Washington and detectives think these two suspects could be connected to a ring of thieves targeting pharmacies. "Two suspects enter the store. They actually pull a weapon. One is carrying the weapon and walks around the store methodically collecting all the employees and then forcing them at gunpoint back into the pharmacy area. At that point the proceed to take some liquid narcotics and some pills and even hit both tills, taking a pretty good amount of money. The taller of the two suspects is described at about 6'4”. The second suspect sounded kind of effeminate, may even be a woman and as you look at these video clips just notice that they do have the stature of a woman, but we're not sure. These two suspects may just be part of a group, we're not positive, but in this specific case they knew exactly what they were doing."

Detectives say the suspect with the gun is a light-skinned black man wearing a black, hooded sweatshirt and sweat pants, black and white tennis shoes and a white cloth mask. He was armed with a small caliber semi-automatic pistol and he was tall. Detectives think the second suspect is black, 5’6”, carrying a two -tone gray backpack and wearing a gray-colored hooded sweatshirt with a black wool jacket over it, black sweatpants, white colored shoes, gloves and a white cloth mask. If you can tell Seattle Police their names, call an anonymous tip into: CRIME STOPPERS: 1-800-222-TIPS You must call the Crime Stoppers hotline with your tip to be eligible to receive a cash reward for information leading to a fugitive’s arrest. CLICK HERE for information on how to TEXT A TIP to Crime Stoppers