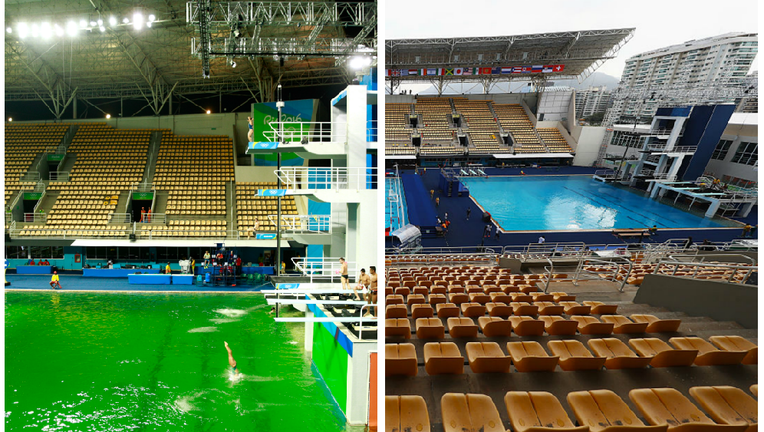 Photos show the pool at the Maria Lenk Aquatics Centre before (right) and after (left) the sudden, mysterious transformation. (Getty)

RIO DE JANEIRO — Like the Chicago River on St. Patrick's Day, the diving pool at the Rio Summer Olympics has suddenly taken on a bright shade of green.

China won a third consecutive gold medal Tuesday, but speculation about the water overshadowed the divers on social media.

British diver Tom Daley, who won a bronze medal after diving into clear blue water Monday, tweeted a photo of the pool saying, "Ermmm ... what happened?!"

In the last 24 hours, the water in the diving pool — but not the adjacent swimming pool — took on a new emerald shade, worrying some on Twitter.

There is speculation that the color could be caused by algae due to a lack of chlorine, but no one knows for certain yet.

Rio organizers issued a statement saying tests showed the water isn't harmful for athletes, and that they are still investigating the cause.