TACOMA, Wash. - Phallon Tullis-Joyce is nearing the top of her sport – suiting up for the OL Reign this season, she led the league in save percentage while earning a nomination for NWSL Goalkeeper of the Year.

That alone would be an impressive feat: doing it while becoming a regular fixture at the Point Defiance Zoo in Tacoma, makes it even more impressive. On her days off, sometimes the day after a game – Tullis-Joyce can be found in the zoo's dive tank, feeding fish or giving "dive talks" to visitors. 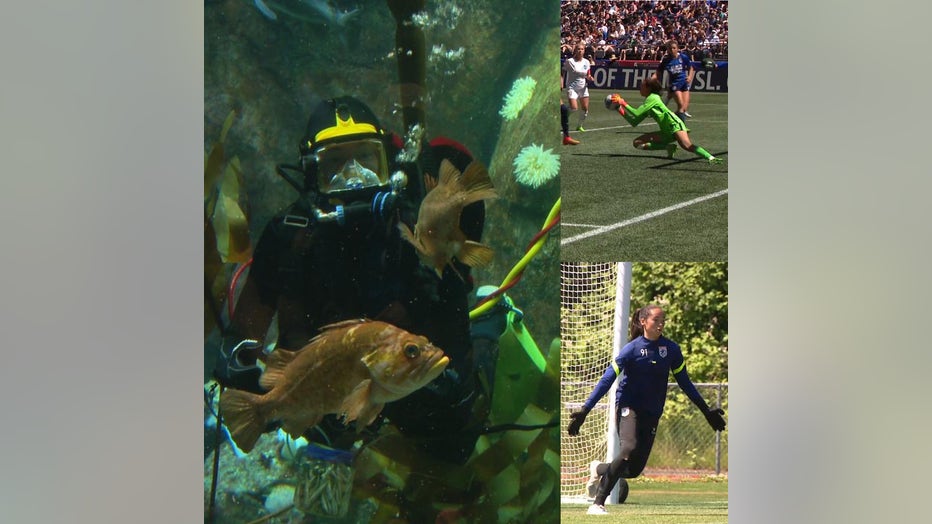 Whether under the water exploring marine wildlife, or on the field Phallon Tullis-Joyce says that it's all about creativity, and being adaptable.

Earlier this year, FOX 13 caught up with Tullis-Joyce at the zoo – appearing before a small crowd of elementary students she swims into position before announcing: "I play soccer professionally for a team called the OL Reign."

Children on the other side of the glass sit in awe. Inside a diving tank surrounded by aquatic life, Tullis-Joyce talks to the students as part of the zoo's dive talk series. She and another worker take turns explaining the finer points of Puget Sound – as kids eagerly wait to ask questions.

"I'm just happy to be here," said Tullis-Joyce. "Happy to be in Washington. To be on the field. To be in the water, here."

That happiness is rooted in a dream. While she began playing soccer at 4-years-old, she decided just one year later what she wanted to do with her life: become a marine biologist. She even remembers the class project where she had to pick a career.

"I had one of those apple that says, ‘I want to be this when I grow up,’" she said. "Mine said marine biologist. I was just stubborn and stuck with it all this time – same with soccer."

And while she has received support from the team, Tullis-Joyce admits she dove right into the volunteer job with the zoo.

"It’s kind of an ask for forgiveness situation," she said laughing, asked whether there was any long consultation with the team. "They’ve always known I love the ocean, and I want to be more involved. I’ve found them to be supportive. Everyone always asks me what my latest dive was, what I saw, and they’re gathering around to see my latest pictures."

A number of her teammates have even attended her dive talks. While Tullis-Joyce describes her awe of the ocean, the team seems to be in awe of her passion – and ability to juggle everything.

"The first time I heard about it, I didn’t know how she fit it into her schedule," said Marley Canales.

Canales said training takes up so much of their time, but that everyone has passions – it’s why she appreciates how vocal Tullis-Joyce has been with her love for the ocean.

"I think it’s important to write the narrative – we’re more than athletes, we have more to us than just soccer," said Canales. "So, I think Phallon is showing us her passion. Having this whole life outside of this sport is inspiring for other athletes."

Laurel Ivory, a fellow goalie, said she can see her passion both on the field, and in the tank.

"To see her educate these kids is really, really awesome," said Ivory. "It has got us all intrigued to learn more, and all these things she’s doing – her bits on Twitter and Instagram – I watch those, so I assume other people are watching her too."

The bits Ivory is referring to are a string of educational videos that Tullis-Joyce has been publishing online. The latest are called "Phishy Phridays," complete with Pokémon themed attire, and gadgets as she explores marine wildlife.

The passion makes more sense when she explains it: she’s never lived more than 20 minutes from the ocean. At the University of Miami she double-majored in both marine science and biology. While living on the West Coast has changed her diving attire due to the cold water – it hasn’t seemed to slow her down.

In fact, when FOX 13 caught up with Tullis-Joyce it was one day after a game. She was already back at work talking to students.

"I’m just in awe every time I see a new creature here," she said.

"You never see the same thing twice in the ocean, and you never have the same game twice in soccer. I think there’s a parallel in the necessity of creativity. It’s just being adaptable, under the water and on the field."