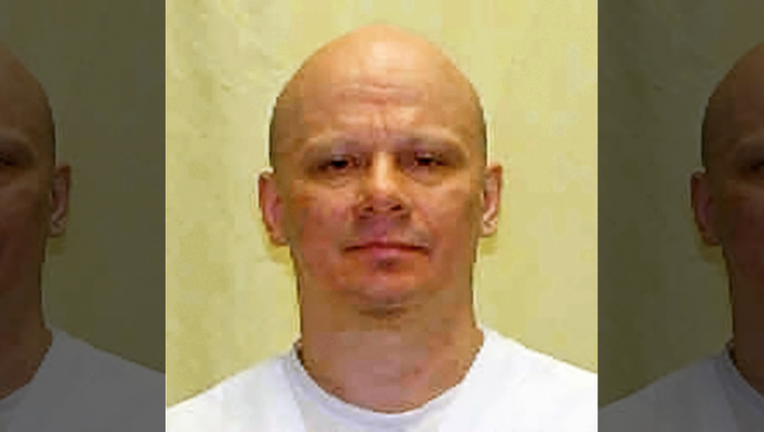 This undated file photo provided by the Ohio Department of Rehabilitation and Correction shows death row inmate Robert Van Hook, convicted of fatally strangling and stabbing David Self in 1985 after meeting him in a Cincinnati bar. (Ohio Department o

LUCASVILLE, Ohio -- An Ohio inmate was executed Wednesday for choking and stabbing to death a man he met in a bar in 1985.

The execution of Robert Van Hook by lethal injection was carried out at the Southern Ohio Correctional Facility. Prison warden Ron Erdos announced the time of death as 10:44 a.m.

During the execution, Van Hook, weeping, told his victim's sister, brother and brother-in-law, "I'm very sorry for taking your brother away from you."

He then recited a poem and began singing which stopped after two minutes when the drugs took effect.

The execution proceeded without any problems, with the inmate's chest rapidly rising and falling for a couple of minutes before he went still.

Van Hook, 58, had no remaining appeals, and Republican Gov. John Kasich rejected his request for clemency without comment.

At the time of the killing, Van Hook was suffering from long-term effects of untreated mental, physical and sexual abuse as a child and was depressed that his life seemed to be falling apart, his attorneys argued.

Kasich should have given more weight to Van Hook's military service and his inability to receive care from Veterans Affairs for his mental health and addiction issues after his honorable discharge, the attorneys said.

The Ohio Parole Board said that despite Van Hook's tough childhood, he was shown love and support by relatives he stayed with for long periods as a child. But that positive influence doesn't outweigh the "gratuitous violence" Van Hook demonstrated, the board said.

Previous attorneys representing Van Hook attempted a "homosexual panic" claim in his defense, or the idea that self-revulsion over sexual identity confusion contributed to a violent outburst. Van Hook's current lawyers say that was misguided, and overlooked his diagnoses of borderline personality disorder and post-traumatic stress disorder from his childhood.

Seizing on that claim, prosecutors have dismissed the idea as nonsense, saying Van Hook made a practice of luring gay men to apartments to rob them.

Prosecutors note Van Hook has an extensive history of violence while incarcerated, including stabbing a fellow death row inmate in November.

The family of victim David Self supported the execution, telling the parole board last month that he is missed every day. Self's sister, Janet Self, said her brother had been reduced over the years to "a gay man in a bar," when he in fact he was so much more.

Authorities say Van Hook met Self at the Subway Bar in downtown Cincinnati on Feb. 18, 1985. After a couple of hours, they went to Self's apartment where Van Hook choked the 25-year-old Self to unconsciousness, stabbed him multiple times in the neck and then cut his abdomen open and stabbed his internal organs, according to court records. Van Hook stole a leather jacket and necklaces before fleeing, records say.

In September 2017 the state put Gary Otte to death for the 1992 murders of two people during robberies over two days in suburban Cleveland.