SEATTLE - The November chill over Puget Sound is expected to turn wet roads into icy ones for the Monday morning commute.

“We are all about bare and wet. bare and wet is the theme for winter weather for SDOT,” said Mafara Hobson with the Seattle Department of Transportation.

She says by 6 p.m. Sunday de-icing trucks had already treated 24 of the city's most traveled routes like the West Seattle Bridge, the downtown Seattle core, Alaskan Way Viaduct, overpasses, bridges, and hills.

SDOT map shows which roads have been de-iced

“Today we had around 12 trucks go out. They deployed this morning and hit a lot of major arterials and salted the road, they were out all morning, got back in around 6 p.m. Our evening crews are in right now and they will deploy at midnight,” said Hobson.

Snohomish County and Pierce counties have also been focusing on de-icing roads for the morning commute.

Wet leaves carpeting sidewalks around Seattle will create slippery walking conditions for people in the morning. SDOT advises drivers to give themselves extra time in the morning and drive at or below the speed limit. Hobson says SDOT is prepared for wintery conditions.

“This is game time for SDOT,” said Hobson. 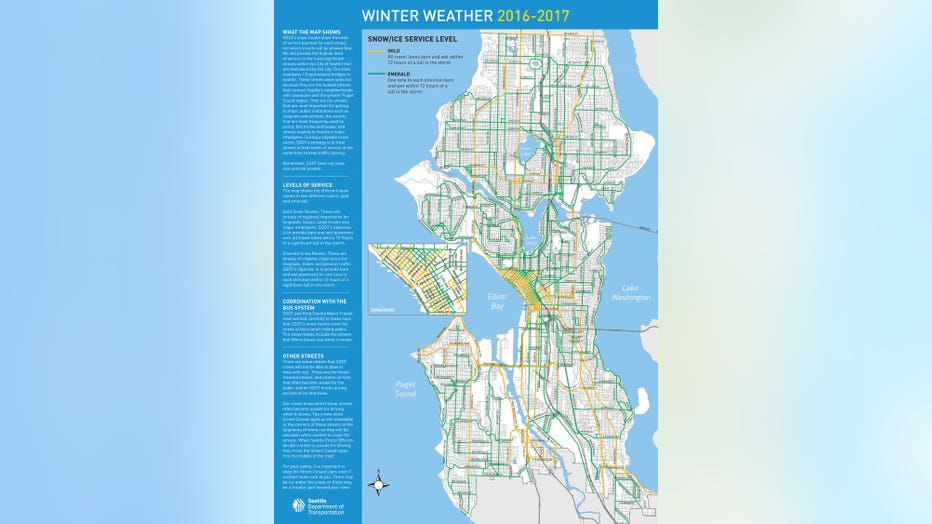