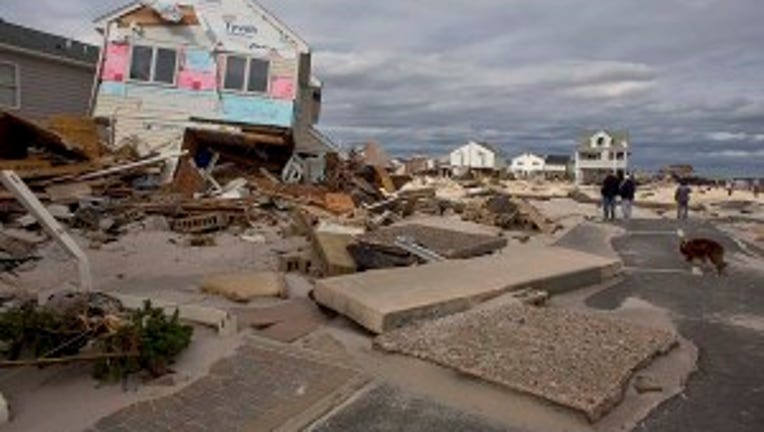 CNN -- Four days before Election Day and four days after Superstorm Sandyravaged the East Coast, Dennis Kobitz, administrator for the Union County Board of Elections, is on his way to polling sites to check on voting machine deliveries.

It would normally take Kobitz a few minutes to cross into the nearby city of Roselle from the Board of Elections office in Elizabeth, a city near Newark. This time it stretches into a 30-minute adventure.

Along the way to a voting site at a middle school, Kobitz passes what appears to be a line of parked cars stretching for blocks, only to discover that the vehicles are in line to buy gas. By the time he reaches the front of the line, policemen have begun telling customers the fuel has run out.

"I've never seen anything like this," Kobitz says while waiting his turn to pass through an intersection where the traffic lights have been out for days. "I never thought I'd be saying 'after the hurricane' in New Jersey."

About 2.4 million customers remained without power on Saturday across 15 states and the District of Columbia. And some may be in the dark for another week.

Sandy's impact is most noticeable in New Jersey, New York and Connecticut, the scene of widespread flooding, power outages and hurricane-force winds.

In New Jersey's Bergen County, 327 voting locations have been consolidated to make up for those areas that still don't have power. At each displaced polling place, election organizers hope to have officials directing voters to the correct polling place.

Kobitz, who is also president of the New Jersey Association of Election Officials, started at the Board of Elections as a seasonal worker in 1984. During his tenure, Union County has been without any major Election Day problems, either from machines or weather, he said.

"We've been pretty lucky," he said.

Union County has 188 polling stations and 433 districts across 21 towns. Kobitz has had to scale back the number of polling locations in Union County because of power outages and access problems.

When not worrying about getting polling sites functioning, Kobitz is concerned about how the storm will affect voter turnout, which in turn could ultimately affect election results.

"Not only is this a presidential election, there is a lot of local elections. We have plenty of mayors, council races," Kobitz told CNN on Saturday. "They're (local elections) usually won by a small amount of votes. It's certainly going to make a difference in this election."

New Jersey Gov. Chris Christie ordered early voting sites to offer extended hours through the weekend to encourage voters to make it to the polls.

"You don't have to wait to vote," he said. "Got a little time on your hands? Tired of cleaning stuff up? Go there in person, you will get a ballot, you vote, hand it in and you are done."

For those who can't make it to their voting precincts, Christie ordered election officials to allow displaced New Jersey voters to place their ballots electronically by submitting a mail-in ballot application via e-mail or fax. Once approved, the voter will be sent an electronic ballot that can, in turn, be e-mailed or faxed back to the county clerk.

During his rounds, Kobitz passes massive uprooted trees now blocking streets or resting on crushed houses, lines of residents with large red gas cans snake around blocks as they wait their turn at area gas stations, and downed power lines and electrical poles.

The sights spark another concern for Kobitz on Election Day: generators and fuel.

"We can't have a generator running day and night," he said, adding that temperatures are dropping to the 40s. "Some of the poll workers are going to be freezing. But what can you do?"

Up the coast on New York's Long Island, where Sandy also unleashed her wrath, Nassau County officials are scrambling to make sure polling sites are ready for Tuesday.

William Biamonte, Democratic Commissioner for the county board of elections, makes his way to a warehouse housing thousands of polling machines. The power only recently returned and a 1950s elevator is finally back online, allowing for election workers to move the droves of machines to the loading docks.

Biamonte is concerned power will not be back up at polling sites in Nassau County Despite New York Gov. Andrew Cuomo's having instructing area power companies to make restoring electricity at polling places a top priority, he said.

As of Friday, more than 200 of the 370 polling sites across Nassau County were without power, while 30 of the sites without power will operate with generators, Biamonte said.

"We're hoping that they take the governor's direction seriously and get us operational," he said. "This is out of our hands. The Board of Elections doesn't have the ability to electrify polling sites or to produce hundreds of generators."

Regardless of the setbacks brought on by the storm, registered voters will be able to cast ballots on Election Day, he said, adding that any previous election challenges pale in comparison in the wake of Hurricane Sandy.

Nassau County has 900,000 voters, and until Sandy hit, Biamonte expected a minimum 670,000 people to show up at the polls. "We're talking about a tremendous turnout," he said.

"Come hell or high water, and we got both of them, people will be voting on Tuesday," Biamonte said. "It's gonna happen, it's a question of how much of an inconvenience it will be."