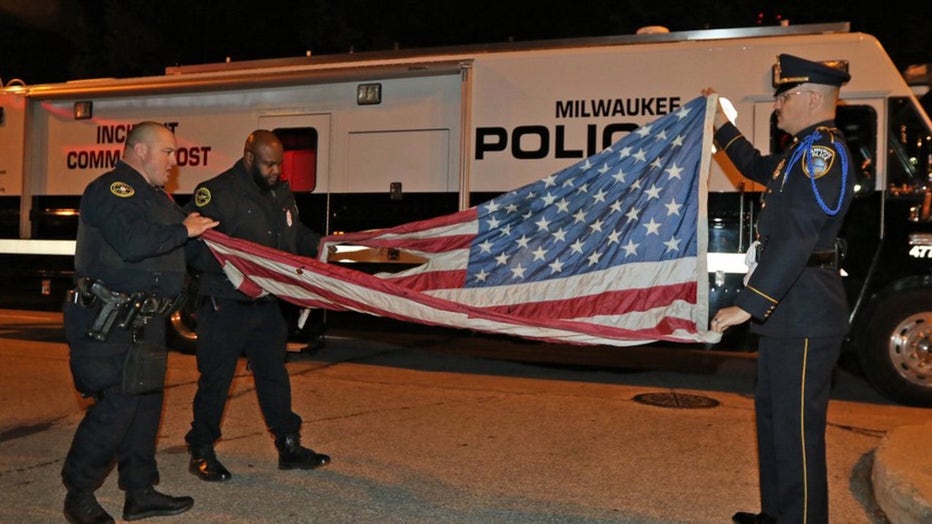 MILWAUKEE -- Hundreds of people ventured into downtown Milwaukee on Tuesday to protest several causes, including minimum wage and immigration.

During the group's march from Milwaukee's City Hall, some protesters set an American flag on fire -- which was immediately extinguished by officers from the Milwaukee Police Department, according to WITI.

In the aftermath of that incident, Milwaukee police ceremoniously folded the damaged flag.

A person of interest has been identified, according to Milwaukee police.

The following statements were issued in response to the burning of the flag:

“On the eve of Veteran’s Day and the 240th Anniversary of the Marine Corps, at a time when Milwaukee and Wisconsin should be celebrating our country for being at the epicenter of our democratic process, protestors chose to disrespect the very symbol of that democracy.

“It is reprehensible that any elected official would encourage this behavior by proudly posting pictures of the flag being trampled upon. The protestors and the elected officials that condone their actions should be ashamed of what they did.

While the protestors may have been within their rights to trample on and burn the flag, that does not excuse their actions. They showed their disdain for our country, our rule of law, and the brave men and women who have fought and died for their rights.

“I want to thank the Milwaukee police officers who intervened, and treated the flag with the respect and reverence it deserves. “