A man was arrested for allegedly setting fires to five homes in Seattle's Central District.

SEATTLE - Seattle Police have arrested a suspect they say set several fires around the Central District neighborhood on Monday night.

According to the Seattle Fire Department, five fires were set in the neighborhood within a span of an hour.

Seattle Police tweeted that they had arrested a person suspected in setting these fires just after 9 p.m.

SPD's arson and bomb squad are heading to the scenes to investigate each fire.

Seattle Fire said it does not appear that there were any injuries or significant damage. 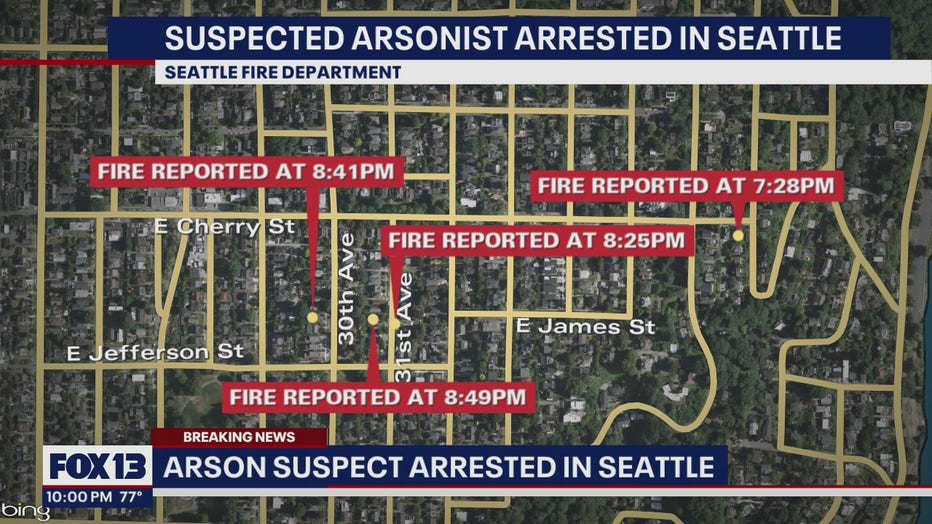 "For some reason, she felt like he was coming this way, and she was right. He was coming exactly this way," said Donald King.

King said he got a call from his neighbor about the fires in his community. A few minutes later, police were swarming his front yard arresting the suspect.

On Tuesday, the suspect, who FOX 13 News is not naming because they are not officially charged yet, appeared in court.

Officials with the King County Prosecuting Attorney’s Office tell us they were looking to charge the man accused of the crimes, with five arsons. However, a judge decided there was probable cause to only charge the suspect with two arsons.

"We feel really fortunate. If it had been the middle of the night, or some other time, it could have been a real tragedy," said Daniel Becker.

One of the arson fires damaged Becker’s home. He says he was in his kitchen when he saw the flames in his backyard.

He says he and his wife tried to put out the flames, but luckily, firefighters arrived.

"If they hadn’t of been there, I don’t know what would happen," he said.

The Seattle fires and subsequent arrest come after five fires were intentionally set in Kent earlier in the day. .

The fires happened near Southeast 240th Street between 104th and 106th avenues Southeast, in the East Hill neighborhood.

A suspect has not been arrested in the Kent arsons.

In light of both of these arsons, the Seattle Fire Department released some tips to reduce the chances of losing your home or business to arson: