Two Tacoma police officers were hurt while trying to investigate a stolen vehicle.

TACOMA, Wash. - A police officer in Tacoma is back home recovering after being thrown roughly 15 feet by a moving car on Sunday afternoon.

The officer – and his partner – suffered injuries that required observation, after trying to talk to two people in connection to a stolen truck.

According to police, the vehicle was spotted on the 1800 block of South Mason Avenue on Sunday by its owner – they have previously reported it stolen. When officers arrived the pair were trying to spray paint the truck near an abandoned property. Officers waited to approach because a loose dog was roaming, but when the pair began to put the dog back into the truck they made a quick getaway. 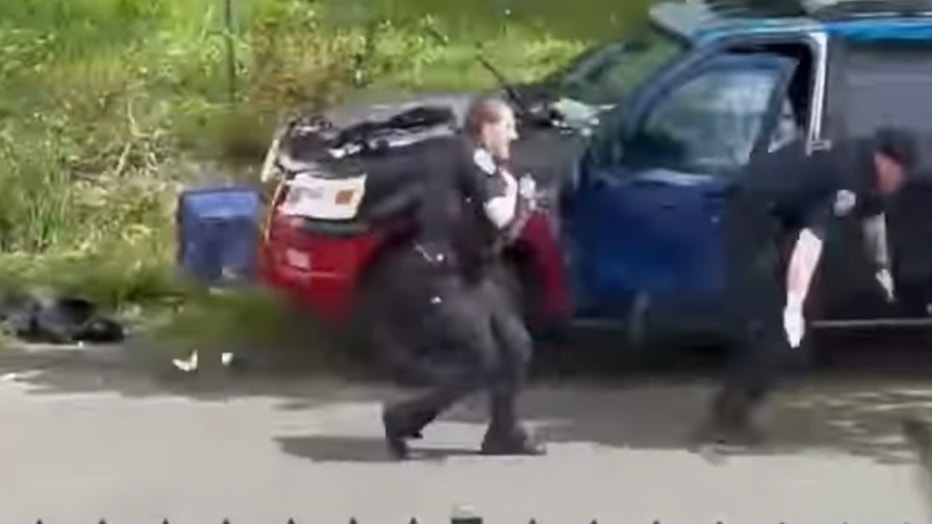 A Tacoma PD officer is thrown by a vehicle after a car theft suspect threw a truck in reverse and gunned it with the officer in front of the door.

"As the suspect put the dog away the officers moved up to continue their investigation at the driver side door," explained Officer Shelbie Boyd. "The driver quickly turned the vehicle on, put it in reverse and then sped away."

In the process both officers were thrown from the car – Boyd told FOX 13 that they were evaluated at a nearby hospital for injuries, but they’re expected to recover.