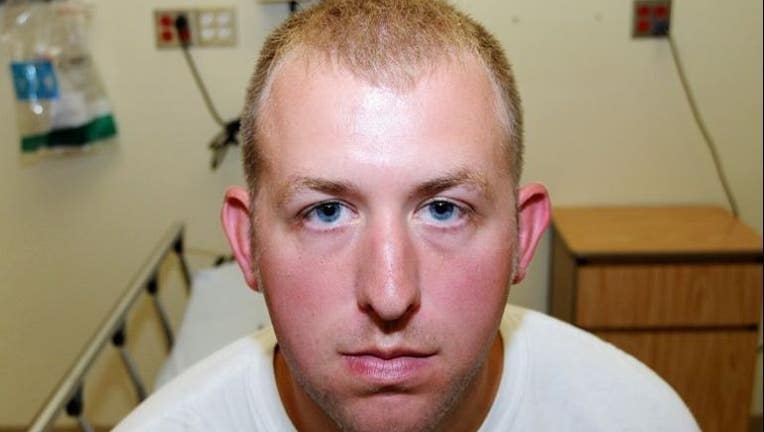 Police officer Darren Wilson after the shooting in Ferguson. (All photos by Ferguson, Mo., Police Dept.)

ST. LOUIS -- A letter to supporters written by Ferguson officer Darren Wilson has been released.

The transcript of the letter was first reported by WKYC.com. The letter, released by an anonymous source, was read by a supporter Monday night.

Here is the transcript of officer Wilson's letter to his supporters:

To all of the pro Officer Wilson Supporters -

I would like to thank you all for standing up for me during this stressful time. Your support and dedication is amazing and it is still hard to believe that all of these people that I have never met are doing so much for me. I watched the CNN video we recorded at the rally on Saturday and it brought tears to my eyes.

All of you are simply amazing, and I don’t know how to thank you all enough. I wish I could attend meet you, hug you, and personally thank you for all of your continued support, however, due to my and my families safety I am unable to. Please don’t give this letter to any media or post it where they can see it. Relay the message of thanks to all and keep this letter private until the investigation is complete.

I want you all to know that I do get updates on the amount of support. Unfortunately, I don’t get to see all of the comments made through social media, but overall messages are relayed to me.

Thank you from the bottom of my heart, and know that I would do the same for any of you.

Also please keep my family in blue in your hearts and prayers, they have all made a sacrifice to their own lives in order to work the excessive hours through the heat and rain to ensure that the riots and protests in Ferguson were as safe as they could be.