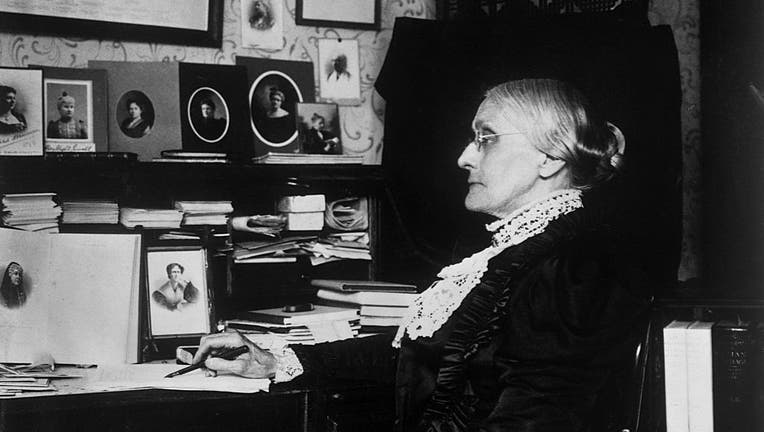 Susan B. Anthony (1820-1906), organizer of the first women's temperance association and president of the Woman Suffrage Association from 1892-1900. (Photo by © CORBIS/Corbis via Getty Images)

ROCHESTER, N.Y. - President Donald Trump’s pardon of Susan B. Anthony is getting push back from the museum that bears the women’s suffrage icon’s name.

Anthony was arrested in 1872 for voting before it was legal for women to do so. Some historians have told NPR that Anthony wouldn’t have wanted a pardon because she didn’t believe she did anything wrong.

As president and CEO of the museum, Hughes pointed to excerpts from Anthony’s diary. In 1873, she wrote that her trial for voting was “The greatest outrage History ever witnessed.”

Because she was a woman, Anthony could not speak as a witness in her own defense. And when the closing arguments ended, the judge dismissed the jury and found Anthony guilty, denying her a trial by jury.

Anthony wrote that she would “never pay a dollar” of the court’s “unjust penalty.”

The 19th Amendment to the U.S. Constitution was ratified on Aug. 18, 1920. But many event organizers have been careful to present it as a commemoration, rather than a celebration.

“To pay would have been to validate the proceedings,” Hughes wrote. “To pardon Susan B. Anthony does the same.”

Hughes said a more appropriate way to honor Anthony would be to continue her fight against any forms of voter suppression.

“Enforcement and expansion of the Voting Rights Act of 1965 would be celebrated, we must assure that states respect the 14th, 15th, and 19th Amendments to the United States Constitution,” Hughes stressed. “Support for the Equal Rights Amendment would be well received. Advocacy for human rights for all would be splendid.

Hughes concluded the museum’s statement by saying Anthony was a major proponent of sex education, equal pay for equal work, fair labor practices, excellent public education and the elimination of all forms of discrimination.