WASHINGTON — President Obama’s health care law will reduce the ranks of the uninsured by roughly 13 million this year and 25 million once the law is fully phased in, but will also result in the equivalent of 2 million people reducing their work hours because of the availability of insurance subsidies, the Congressional Budget Office said Tuesday.


The latest projections from the nonpartisan budget analysts immediately produced talking points for both sides in the deeply polarized debate over the Affordable Care Act.

Republicans seized on the projected reduction in work hours, roughly a 1% to 2% decline, to boost their claim that Obamacare will harm the economy.

Democrats pointed to another section of the report which forecast that the law’s so-called risk-corridors provision, which Republicans have denounced as a taxpayer “bailout” of insurance companies, would save the government $8 billion over the next decade. The provision at issue is intended to equalize the risk that insurers face if some end up with a less healthy assortment of consumers than others. 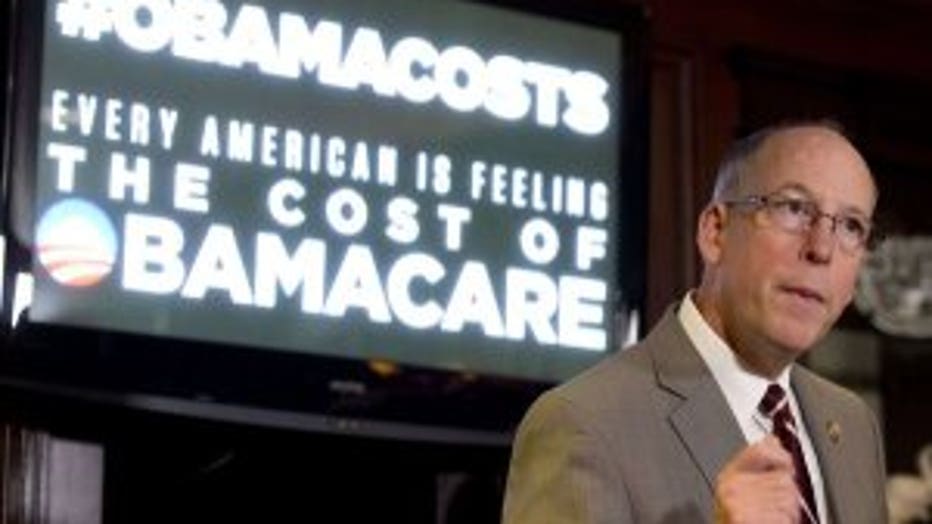 The CBO finding that the risk-corridors provision will save money could complicate GOP efforts to push for its repeal.

The latest report also repeats previous CBO estimates that the law will reduce the government’s long-term deficits by about $1 trillion over the next 10 years as the costs of its subsidies are offset by new taxes and cost reductions elsewhere in the health system.

The projection that 13-million people will obtain coverage under the law this year — about 6 million through buying insurance on the law’s new online marketplaces and the rest through expansion of Medicaid — represents a decline of CBO’s earlier forecasts. Previously, CBO had projected that about 7 million people would sign up this year, but it lowered those estimates because of the botched rollout of the law in October and November.

The new forecasts do not significantly change the outlook for the law’s financial stability or long-run projections regarding coverage. CBO’s analysts expect sign-ups will increase sharply next year and the year after.

By the end of Obama’s tenure, CBO forecasts, the number of uninsured people in the U.S. will have been cut almost in half. About 31 million people will remain uninsured, including about 10 million unauthorized immigrants who are not eligible for the law’s benefits, the report forecasts.

CBO’s projections about jobs, however, sparked the most immediate controversy.

The impact the report forecast was relatively small. The law will “reduce the total number of hours worked, on net, by about 1.5% to 2% during the period from 2017 to 2024, almost entirely because workers will choose to supply less labor,” CBO said. That was a somewhat larger projection than CBO had made in 2010, when the law passed.

“For some people, the availability of exchange subsidies under the ACA will reduce incentives to work,” the report said. Some low-income workers, in particular, may reduce their hours if they find that they can afford health insurance while working less, analysts concluded.

In a briefing for reporters, CBO Director Douglas Elmendorf said he wanted “to emphasize that that reduction doesn’t mean that that many people will chose to leave the labor force. We think that some people will chose to work fewer hours.” Once the law is fully phased in, its likely impact will be to increase the number of jobs in the economy, Elmendorf said, although he added that the precise impact was hard to estimate.

"Over the next few years, we think the Affordable Care Act is providing a boost to the demand for goods and services in the economy,” Elmendorf said. At the same time, he added, some companies might cut back workers’ hours to avoid costs related to healthcare. “Both those effects mostly fade after a few years,” he said.

Republican opponents of the health law eagerly seized on the new report as evidence for their long-time assertion that Obamacare would be a “job killer.”

House Speaker John A. Boehner (R-Ohio) quickly issued a statement saying the report confirmed the "devastating impact of Obamacare on jobs." "The middle class is getting squeezed in this economy, and this CBO report confirms that Obamacare is making it worse," he said.

White House officials denied that, emphasizing that the effect the CBO report was talking about was both small and voluntary. The ACA “is giving workers new choices and new options,” said a senior administration official. If some people choose to work less as a result, that shouldn’t be seen as a problem, the official added.

“If you got rid of Social Security and Medicare, more 95-year-olds would work,” the official noted. “Most of us wouldn’t suggest that as a good argument” for getting rid of those programs.