WASHINGTON (CNN) --  Tension dramatically mounted in Ukraine's Crimea region Friday as its ambassador to the United Nations warned Russia against any further violation of its territorial borders, a warning that came as the United States urged Russia to pull back from the region or face possible consequences.

"We are now deeply concerned by reports of military movements taken by the Russian Federation inside Ukraine," President Barack Obama said in televised comments from the White House. "It would be a clear violation of Russia's commitment to respect the independence and sovereignty and borders of Ukraine and of international laws."

Obama said any violation of Ukraine's sovereignty and territorial integrity would be "deeply destabilizing, and he warned "the United States will stand with the international community in affirming that there will be costs for any military intervention in Ukraine." 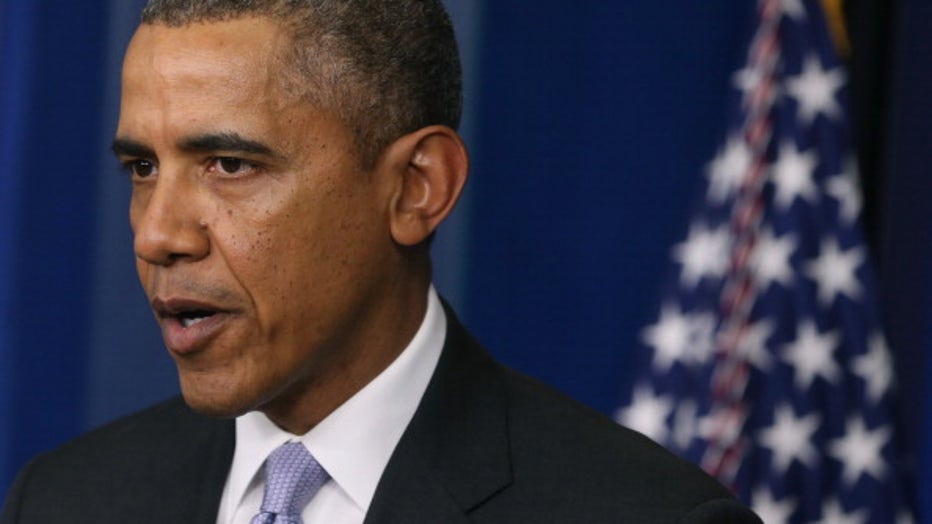 President Barack Obama speaks in the Brady Briefing Room at the White House on Friday, Feb. 28, 2014, on the situation in the Ukraine. He warned Russia that "there will be costs" if it intervenes militarily. (Photo: Mark Wilson/Getty Images)

The remarks were the latest in a series of fast-moving developments that saw Ukrainian officials grappling with rising secessionist passions in the Russian-majority region, where the airspace has been closed and communications have been disrupted.

Ukraine Interior Minister Arsen Avakov earlier characterized the presence at the airport of unidentified armed men, who wore uniforms without insignia, as an "armed invasion."

The crisis echoed throughout the world, with the U.N. Security Council president holding a private meeting about the crisis enveloping Ukraine and world leaders calling armed groups not to attempt to challenge Ukrainian sovereignty.

At a press conference outside the U.N. Security Council, Ukraine's ambassador to the U.N., Yuriy Sergeyev, said the country was prepared to defend itself and urged the U.N.'s moral and political support for the Kiev government, particularly in Crimea.

Since last week's ouster of President Viktor Yanukovych, Ukraine has faced a deepening schism, with those in the west generally supporting the interim government and its European Union tilt, while many in the east preferring a Ukraine where Russia casts a long shadow.

Nowhere is that feeling more intense than in Crimea, the last big bastion of opposition to the new political leadership. And Ukraine suspects Russia of fomenting tension in the autonomous region that might escalate into a bid for separation by its Russian majority.

"We still have a chance to stop the negative developments and separatism," Sergeyev said.

Sergeyev accused Russia of violating its military agreement by blocking Ukrainian security forces, including its border guards and police, in the region.

"This group is making a serious mistake challenging our territorial integrity," he said.

But Russia's ambassador to the United Nations, Vitaliy Churkin, compared the reports of Russian troops taking charge of positions on the ground to rumors that "are always not true."

"We are acting within the framework of our agreement," he said.

Even so, U.S. military commanders and intelligence agencies were scrambling Friday to determine what was needed to get a better picture of Russian movements.

The U.S. State Department warned Americans to defer all non-essential travel to Ukraine, particularly the Crimea region, "due to the potential for instability following the departure of former President Yanukovych and the establishment of a new government."