Former President Barack Obama returned to the White House for the first time since leaving office to celebrate the Affordable Care Act, also known as Obamacare. During his remarks, Obama teased President Joe Biden, jokingly calling him "vice president" and commenting that the Secret Service are now all required to wear aviator sunglasses.

WASHINGTON - President Barack Obama returned to the White House on Tuesday to savor the 12th anniversary of his signature Affordable Care Act, which is now part of the fabric of the American health care system and whose reach President Joe Biden is looking to extend.

Sign-ups under the health law have increased under Biden's stewardship, and more generous taxpayer subsidies have cut costs for enrollees, albeit temporarily.

Obama's last time in the mansion was Jan. 20, 2017, when he left to escort his successor, a president-elect bent on overturning "Obamacare," to the Capitol to be inauguration.

"It's good to be back in the White House. It's been a while," Obama said in the East Room after he was introduced by Vice President Kamala Harris. He opened by referring to Biden as "vice president" before acknowledging the joke and embracing his former No. 2.

Obama said he and Biden accomplished "a lot" in their eight years as stewards of the country, but "nothing made me prouder than providing better health care and more protections to millions of people across this country."

"The ACA was an example of why you run for office in the first place," Obama said, calling it the "high point of my time here."

Biden and Obama marked the 12th anniversary of the law, which back in 2010 the then-vice president had memorably called a "big (expletive) deal." Its staying power has been enhanced by three Supreme Court victories and an emphatic thumbs-down vote by the late Sen. John McCain, R-Ariz., which took the wind out of President Donald Trump’s efforts to repeal and replace it. 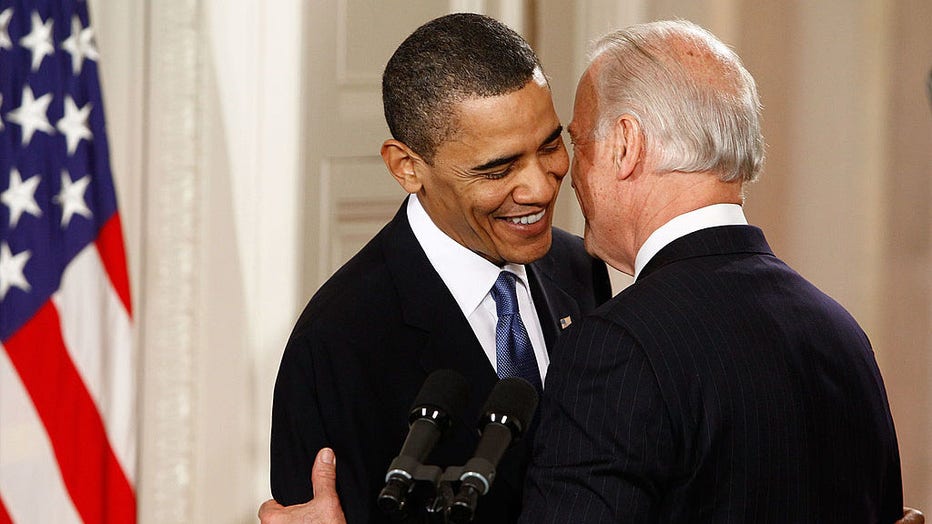 FILE IMAGE - U.S. President Barack Obama (L) is embraced by Vice President Joe Biden before signing the Affordable Health Care for America Act during a ceremony in the East Room of the White House on March 23, 2010, in Washington, DC. Biden was heard

The law was such a bugaboo in 2010 that Democrats rarely invoked it as they went into a midterm election that turned out to be, in Obama's own words, a "shellacking." Now, Democrats are hoping the political equation will work to their advantage, and that a focus on shoring up the tween-age health law can help them avoid a debacle at the polls this November.

In addition to talking health care at the White House, Biden and Obama met over lunch, recalling their weekly ritual when Biden served as Obama’s vice president.

Vice President Kamala Harris called on Congress to allow Medicare to negotiate the price of prescription drugs and to make permanent subsidies for the Affordable Care Act that were included in Biden’s pandemic relief bill. Harris also called out 12 states that have not expanded eligibility for Medicaid.

Obama likes to refer to his health care law as a "starter home" that Americans can build upon, gradually reducing the 9% share of the population that remains uninsured. The rate was nearly 15% in 2013, before the coverage provisions of the law took effect. Between the health law's Medicaid expansion and its health insurance markets, more than 30 million people are now estimated to be getting coverage.

Shortly after taking office, Biden opened up the health insurance markets to anyone seeking coverage during the COVID-19 pandemic, and his coronavirus relief bill provided a significant, though temporary, increase in financial assistance. The result was a record 14.5 million people signed up for subsidized private coverage. 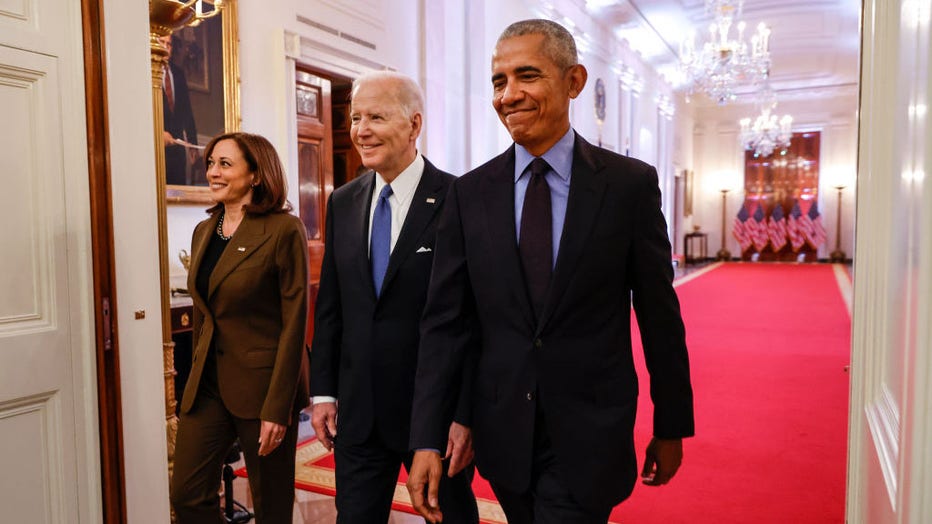 WASHINGTON, DC - APRIL 5: (L-R) Vice President Kamala Harris, former President Barack Obama, and U.S. President Joe Biden arrive for an event to mark the 2010 passage of the Affordable Care Act in the East Room of the White House on April 5, 2022, in

When it comes to how to keep that trend going, Obama and Biden have no shortage of options to discuss.

The Biden administration has been working on a fix to what's known as the law's family glitch, a quirk estimated to be keeping about 5 million people from getting coverage under the law. The White House announced the new policy proposal Tuesday.

People tripped up by the family glitch are dependents of workers who have an offer of employer coverage that the government interprets as being affordable. As a rule, people with affordable employer coverage are not eligible for taxpayer-subsidized ACA plans.

But the issue with the current interpretation is that affordability is determined by the cost for employee-only coverage, and not more expensive family policies. Workers able to afford their own share may not be able to cover premiums for the entire family. So the family is cut out of ACA coverage.

A Biden administration regulation addressing the issue recently cleared White House review. The intent of the original policy was to prevent people with employer coverage from going into the health law's subsidized markets, but advocates say it has proven too restrictive.

The White House estimates that the fix would help 200,000 people get insurance and bring costs down for nearly 1 million more.

There are more fundamental issues for the two presidents to consider as well, both policy-wise and politically.

Unless Democrats in Congress finally coalesce around a version of Biden's social legislation, his enhanced financial assistance for millions purchasing ACA plans will expire at the end of this year. A return to higher premiums would likely trigger an increase in the number of uninsured people, a political embarrassment for Democrats committed to expanding coverage.

The Biden legislation, which passed the House but sputtered in the Senate, also includes a mechanism for providing coverage to as many as 4 million uninsured low-income adults in states that have refused the health law's Medicaid expansion. It would deliver on Biden's campaign promise to build on existing government programs to move the U.S. closer to coverage for all.