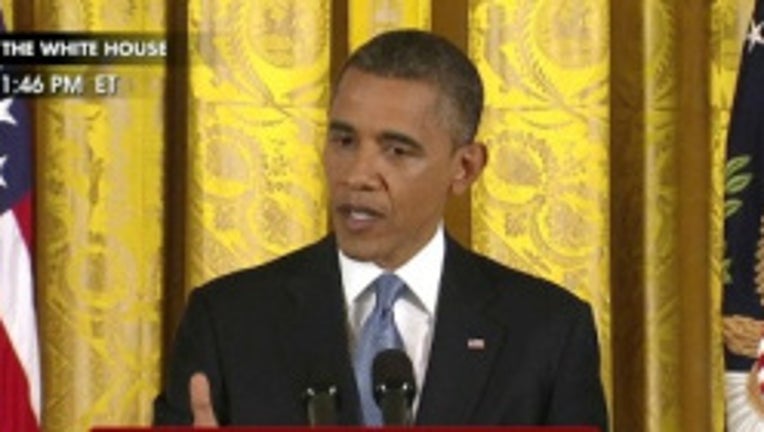 WASHINGTON -- President Barack Obama called out Republican Sens. Lindsey Graham and John McCain for their "outrageous" comments saying they would block U.S. Ambassador to the United Nations Susan Rice if she is nominated for secretary of state.

"If Senator McCain and Senator Graham and others want to go after someone, they should go after me," Obama said at a White House news conference on Wednesday. "When they go after the U.N. ambassador, apparently because they think she's an easy target, then they've got a problem with me."

Earlier Wednesday, Graham and McCain said they would use parliamentary means to hold up her nomination, should it be made, over her characterization of the deadly September attack on the U.S. diplomatic mission in Benghazi, Libya.

After that attack, Rice was dispatched to several talk shows, where she said the incident involved a "spontaneous" demonstration. Senior administration officials later said Rice was speaking from talking points prepared for official use and the word "spontaneous" was a poor choice to describe what is now understood to have been a terrorist attack.

The assault killed Ambassador Christopher Stevens and three other Americans and was a flashpoint in the just completed presidential election campaign.

Rice is among the potential nominees to replace Secretary of State Hillary Clinton, who has said she does not wish to serve in Obama's second term but is willing to stay on until her replacement is confirmed by the Senate.

McCain took to the floor of the Senate about an hour after Obama's remarks and said that the president and other statements by officials on the attacks were "not true."

"The president of the United States did not tell the American people the truth about the attacks that took four brave Americans' lives that went on for eight, seven hours, for which we were totally unprepared. Mr. President, four brave Americans died. It has now been eight weeks. The American people have received nothing but contradictory statements from all levels of our government," he said, pounding his hand on the lectern.

McCain charged that "this president and this administration has either been guilty of colossal incompetence or engaged in a cover-up, neither of which are acceptable to the American people."

Graham responded to Obama with a sharp statement of his own: "Mr. President, don't think for one minute I don't hold you ultimately responsible for Benghazi. I think you failed as commander-in-chief before, during, and after the attack.”

Asked off the Senate floor how personal the exchanges between the senators and Obama got, Graham said, "Well, you know, all I can say is, I do hold him responsible. If he's worried about me not holding him responsible, he's wrong.

Asked if he thought Rice should step down, Graham said, "I'm not asking her to step down. I'm just not going to promote anybody that I think is up to their eyeballs in the debacle."

In his remarks on Wednesday, Obama defended Rice's earlier televised comments, saying, "She made an appearance at the request of the White House in which she gave her best understanding of the intelligence that had been provided to her."

He said he is open to the appointment for Rice, although he said has not yet decided who he will advance when Clinton steps down. Speculation has also centered on Sen. John Kerry, D-Mass., for secretary of state or defense.

Rice previously served as assistant secretary of state under President Bill Clinton and was a foreign policy adviser to Obama's 2008 campaign.

Graham and other Republicans have not only questioned her statements, but also why the administration put her forward to speak about the attack, rather than another top official who might have been more directly connected to the Libya situation.

"The reason I don't trust her is that I think she knew better, and if she didn't' know better, she shouldn't be the voice of America," Graham said.

Both Graham and McCain have called for a select committee to investigate the Benghazi attacks, including the U.S. response and preparations, such as whether the consulate had adequate security.

"I just want to find out what happened in Benghazi in a coordinated fashion that the work product would be accepted by the American people," Graham said. "I've got some firm opinions. I think it was poorly handled. But we'll never know. I think it's a symptom of a greater problem."

He reiterated his call for one committee to investigate.

Instead of going off in three different directions, where you don't coordinate your questions, and having people testify multiple times, let's put one committee together. Democrats will lead it. They should, they're in charge. And find out what happened.

But Republican Sen. Kelly Ayotte of New Hampshire, who has joined forces with Graham and McCain in calling for a select committee investigation of Benghazi, told CNN's Wolf Blitzer that she would put a hold on any Rice nomination until she answered questions.

"Then I will reassess what her answers are on those questions," Ayotte said.

Republican Sen. Rand Paul of Kentucky told CNN that someone should lose their jobs over Benghazi but Rice should not be the issue. He said security questions are paramount.

"I think really the more important question isn't really about whether it was caused by terrorism or whether it was caused by a movie," he said. "Obviously it was terrorism, but I think the more important question is why were there no Marines guarding our ambassador. Who made the decision -- not an immediate... decision, but a month-long desk decision to send an ambassador into a war-torn country without any uniformed Marines."

Paul said he did not want to "pre-judge" any nomination for secretary of state.