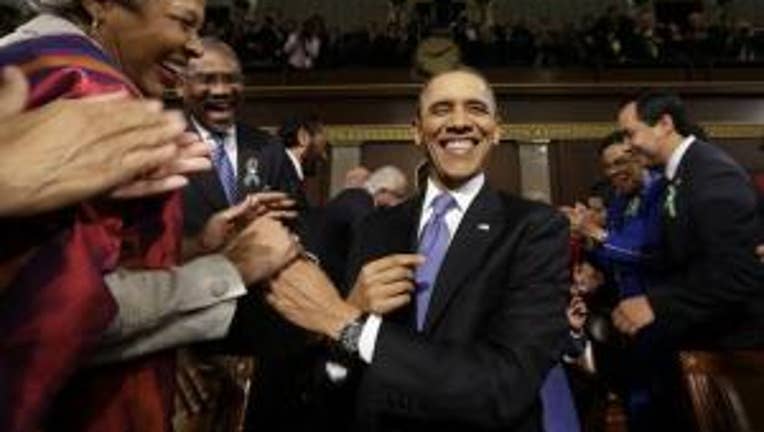 WASHINGTON -- Declaring that the nation is stronger “after years of grueling recession,” President Obama advocated an array of modest second-term initiatives Tuesday night that he said wouldn’t bust the federal budget.

There were no sweeping new initiatives. In a one-hour speech that weighed in at a hefty 6,600 words, the president focused at length on domestic issues, including gun control, voting rights, education, immigration and economic development.

“Nothing I’m proposing tonight should increase our deficit by a single dime. It’s not a bigger government we need, but a smarter government that sets priorities and invests in broad-based growth,” Obama said.

The president addressed global issues, including climate change and some of the  national security challenges that may well come to define his second term. To applause, Obama formally announced an expedited U.S. withdrawal from Afghanistan that will roughly halve the remaining force, a reduction of 34,000 troops.

“By the end of next year our war in Afghanistan will be over,” he declared, as members of both parties rose to their feet.

In line with Obama’s aversion to greater military involvement, including in Syria, Mali and other trouble spots, the U.S. will leave behind a residual force of a few thousand troops for training and counter-terrorism, pending the negotiation of an agreement with the Afghan government.

Some of his most emotional language was saved for the problem of gun violence, one of the top items on his agenda.  He highlighted the tragic stories of shooting victims, or their surviving relatives, who were on hand to add extra punch to Obama’s renewed plea for new background checks on all gun sales and limits on high-capacity ammunition magazines and assault-style weapons.

Among those he singled out were the parents of Hadiya Pendleton, a 15-year-old majorette who performed at Obama’s inauguration last month, then was slain in a shooting a mile from Obama’s house in Chicago.  Former Rep. Gabrielle Giffords (R-Ariz.), severely injured in an assassination attempt in Tucson and now leading a new gun-control effort, was also looking down from the gallery.

“They deserve a simple vote,” the president said, to an audience in the Republican-controlled House chamber, where prospects for gun-control legislation remain in doubt.  “Our actions will not prevent every senseless act of violence in this country.  In fact, no laws, no initiatives, no administrative acts will perfectly solve all the challenges I’ve outlined tonight.  But we were never sent here to be perfect. We were sent here to make what difference we can.”

Claiming  Obama thinks a "free enterprise economy" is "the cause of our problems" -- not, as he sees it, the solution -- Sen. Marco Rubio, R-Fla., argued in his rebuttal speech Tuesday night that the president's proposals would hurt middle class citizens more than help them.

In his speech, the president defended his counter-terrrorism efforts overseas, including the controversial use of unmanned drones.  But he said he would work with Congress to make the deadly targeting “more transparent to the American people and to the world.”

Obama reacted sharply to North Korea’s latest nuclear weapons test the day before, asserting that such “provocations” will only further isolate the reclusive regime of Kim Jung-un.   At the same time, he said, his administration will work with leaders in Moscow to make further reductions in the nuclear arsenals of the United States and Russia.

Moving to strengthen the nation's cyber defenses, Obama said he had signed an executive order earlier in the day to improve sharing of classified information between the government and the owners and operators of critical infrastructure, including electric utilities, dams and mass transit.  Legislation that would have created more comprehensive standards for the private sector was blocked in Congress last year, amid opposition from civil liberties groups worried about individual privacy, as well as Republicans and business leaders concerned about unnecessary regulation.

Many of the initiatives Obama touched on in his speech will likely require executive action in the end, to circumvent opposition from conservatives in Congress.

The nation must do more to fight global warming, he said, addressing skeptics of climate change.

If Congress won’t act “soon,” he added, “I will,”  likely through new Environmental Protection Agency limits on greenhouse gas emissions.

In another nod to environmental action, he called for more research to make burning natural gas cleaner, and proposed to use revenues from the production of petroleum on federal lands to fund a new federal trust fund for research to end the burning of hydrocarbons to power cars and trucks.

Obama also announced the creation of a new study commission to make it easier for Americans to vote without enduring long waits at polling places.  The panel will be led by Robert Bauer, Obama’s 2012 campaign counsel, and Benjamin Ginsberg, who held a similar position in Republican Mitt Romney’s campaign.

In an echo of his re-election campaign themes, the president framed many of his proposals around the middle class, which he described as “the true engine of America’s growth” when it is “rising” and “thriving.”  But he said “the unfinished task” of America today is “to make sure that this government works on behalf of the many, and not just the few.”

Education initiatives figured prominently in Obama’s plans to build what the administration terms “ladders of opportunity” to help poor Americans reach the middle class. They include offering universal preschool for every low- and moderate-income 4-year-old in the country.

Many of the ideas were either recycled proposals or initiatives that would probably require little or no new spending, such as a competition to redesign the nation’s high schools and “promise zones” to help rebuild 20 hard-hit communities by coordinating government assistance and private investment.

Other proposals included a renewed effort to boost the still-recovering housing market.  The president wants to waive up to $3,000 in refinancing costs to help homeowners benefit from today’s low interest rates, including those whose mortgages are not government-backed loans.

The president also said he would begin new talks with the European Union on a free trade agreement, an effort to lift export-related sectors of the U.S. economy.

He also called for gradually raising the minimum wage to $9 an hour by 2016.  The federal minimum wage has been $7.25 since the first year of Obama’s presidency, although 19 states, including California and Illinois, have higher rates.

He also is proposing a $1-billion plan to create 15 institutes around the country to promote innovative American manufacturing.  The White House said Obama would launch three of them immediately, using existing funding from the Defense and Energy departments, among other resources, including contributions from the private sector.

Obama defended his proposals by saying that, taken together, they wouldn’t increase the deficit. But covering the costs of his proposals will require cuts elsewhere, and the full details are unlikely to be available until at least mid-March, when the president releases his 2014 budget.