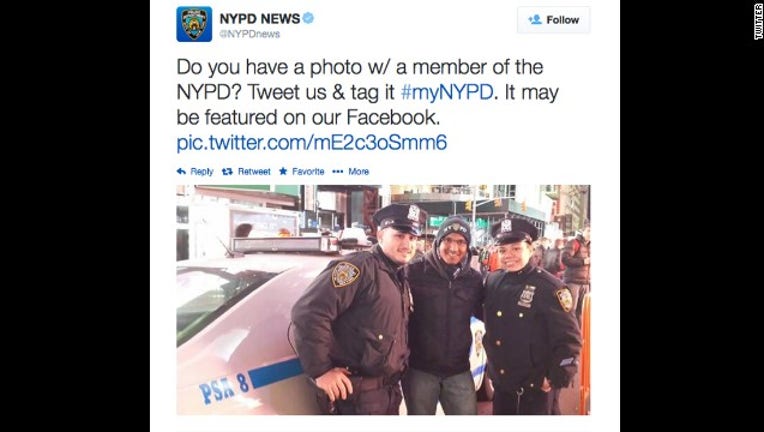 NEW YORK (CNN) -- It's hard to imagine how the campaign could have gone more wrong from the perspective of police.

The New York City Police Department on Tuesday asked folks on Twitter to post photos with its officers, using the hashtag #myNYPD.

The response was swift -- and overwhelmingly negative.

"Free Massages from the #NYPD. What does YOUR Police Department offer?" tweeted @OccupyWallStNYC, which posted an image of officers holding a man, seemingly screaming, with his arms behind his back, on top of a car.

"The #NYPD will also help you de-tangle your hair," tweeted @MoreAndAgain, posting a photo of an officer pulling the hair of a person who appears to be under arrest.

Asked about the campaign, an NYPD spokeswoman defended it.

"The NYPD is creating new ways to communicate effectively with the community. Twitter provides an open forum for an uncensored exchange and this is an open dialogue good for our city," said Deputy Chief Kim Y. Royster.

Indeed, the posts weren't all bad.

"my photo from my ride along with the boys from the 90th pct," tweeted @poshwonderwoman, showing a woman posing alongside three smiling officers.

One user even criticized the backlash.

"People are so lame, there's a lot of good cops out there as well," tweeted ‏@annuhk.