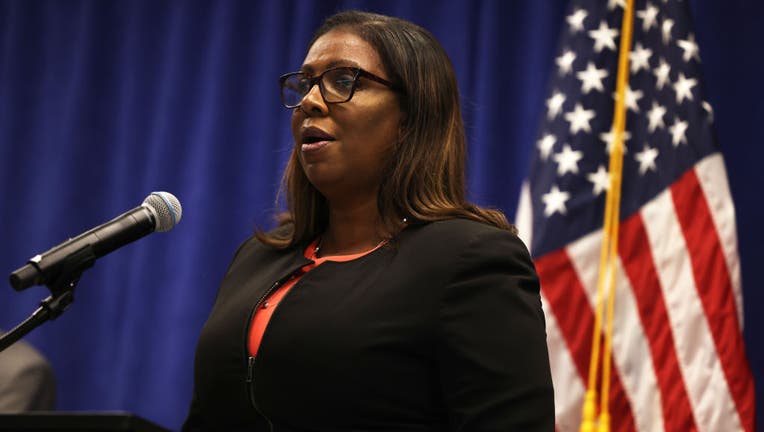 ROCHESTER, N.Y. (AP) - New York's attorney general on Saturday moved to form a grand jury to investigate the death of Daniel Prude, a Black man who died earlier this year after Rochester police placed a hood over his head and held him down.

“The Prude family and the Rochester community have been through great pain and anguish,” Attorney General Letitia James said in a statement about Prude’s death, which has sparked nightly protests and calls for reform. She said the grand jury would be part of an “exhaustive investigation.”

Prude’s death after his brother called for help for his erratic behavior in March has roiled New York’s third-largest city since video of the encounter was made public earlier this week, with protesters demanding more accountability for how it happened and legislation to change how authorities respond to mental health emergencies.

“This is just the beginning,” Ashley Gantt, a protest organizer, said by email after James’ announcement. “We will not be stopped in our quest for truth and justice.”

Protesters gathered Saturday for a fourth night on the street where Prude, naked and handcuffed, was held face-down as snow fell. Policy body camera video shows officers covering Prude's head with a “spit hood,” designed to protect police from bodily fluids, then pressing his face into the pavement for two minutes.

Prude died March 30 after he was taken off life support.

The Monroe County medical examiner listed the manner of death as homicide caused by “complications of asphyxia in the setting of physical restraint.” Excited delirium and acute intoxication by phencyclidine, or PCP, were contributing factors, the report said.

A police internal affairs investigation cleared the officers involved of any wrongdoing, concluding in April that their "actions and conduct displayed when dealing with Prude appear to be appropriate and consistent with their training.”

James' office opened its investigation the same month. Under New York law, deaths of unarmed people in police custody are often turned over to the attorney general’s office, rather than handled by local officials.

Gov. Andrew Cuomo earlier this week called on James to expedite the probe.

“Today, I applaud Attorney General Tish James for taking swift, decisive action in empaneling a grand jury,” Cuomo said in a statement. “Justice delayed is justice denied and the people of New York deserve the truth.”

Advocates say Prude’s death and the actions of the seven now-suspended Rochester police officers demonstrate how police are ill-equipped to deal with people suffering mental problems.

Having police respond can be a “recipe for disaster,” The National Alliance on Mental Illness said in a statement Friday.

Prude’s death “is yet another harrowing tragedy, but a story not unfamiliar to us,” the advocacy group said. “People in crisis deserve help, not handcuffs.”

Stanley Martin, an organizer of Free the People Rochester, told reporters: “We do not need violent workers with guns to respond to mental health crises.”

Activists have marched nightly in the city of 210,000 on Lake Ontario since the police body camera footage of the encounter with Prude were released by his family Wednesday.

Friday night’s protest resulted in 11 arrests, police said. As they had the night before, officers doused activists at police headquarters with a chemical spray to drive them from barricades around the building.

As the night wore on, demonstrators were pushed further back, as police fired what appeared to be pepper balls. Fireworks were shot off and a bus stop was set on fire.

Prude’s family has said he appeared to be spiraling into crisis in the hours before his encounter with police.

“You’re trying to kill me!” the 41-year-old man is heard saying.

A police union has defended the officers involved in the encounter, saying they were strictly following department training and protocols, including using the mesh hood.