Flood warnings are in effect as heavy rain continues to hit western Washington. Some rivers are near the flood stage and others are monitoring.

WASHINGTON - The National Weather Service has issued a flood warning for six western Washington rivers as heavy rainfall continues from the weekend into Monday.

According to the NWS, prolonged rainfall coupled with snow runoff in mid to low elevations and strong winds are driving several rivers above minor to major flooding.

The flood warnings are in effect for the following rivers:

Flood warnings mean that those in the impacted areas should take immediate action -- flooding is imminent or occurring.

RELATED: An atmospheric river is going to have a major impact on our forecast for the next 3 days 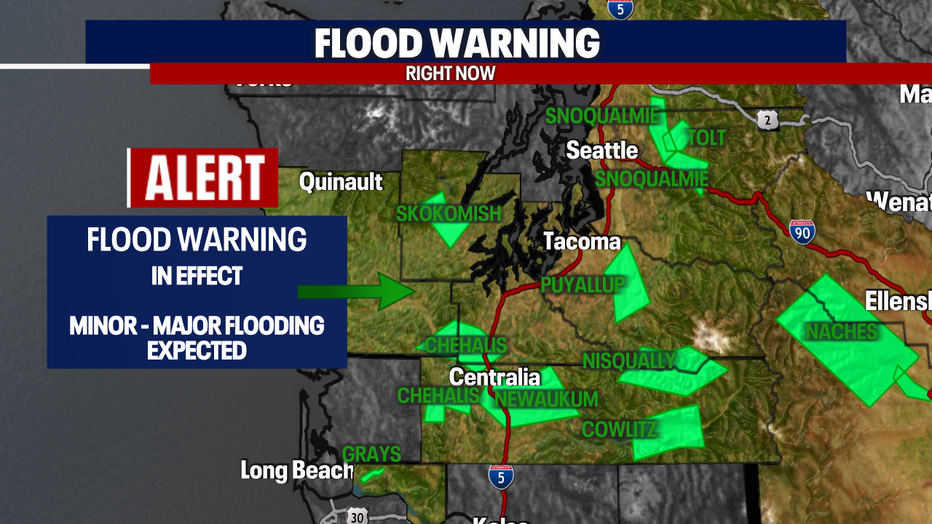 In King County, some rivers are in phase two of flooding, including the White River and the Skykomish River. There is minor flooding at this phase and some roads may be closed. County officials are monitoring river gauges and flood conditions.

Two rivers were in phase 3 of flooding: Snoqualmie Basin and Green Giver.

Atmospheric river remains in the region, calling for another wet 12 to 18 hours. Several locations reached the top five wettest February days on record by the end of the day Monday, according to the National Weather Service.

Atmospheric river storms are fueled by long and wide plumes of moistures pulled in from the Pacific.

Normal precipitation for the entire month of February in Seattle is 3.76 inches, according to the National Weather Service. In the past 48 hours, Seattle has seen 3.73 inches of rain.

Some rivers have flood warnings issued and others are close to reaching their flood stage, or have reached it already. FOX 13's Jennifer Lee takes a look at flooded roads in Carnation.