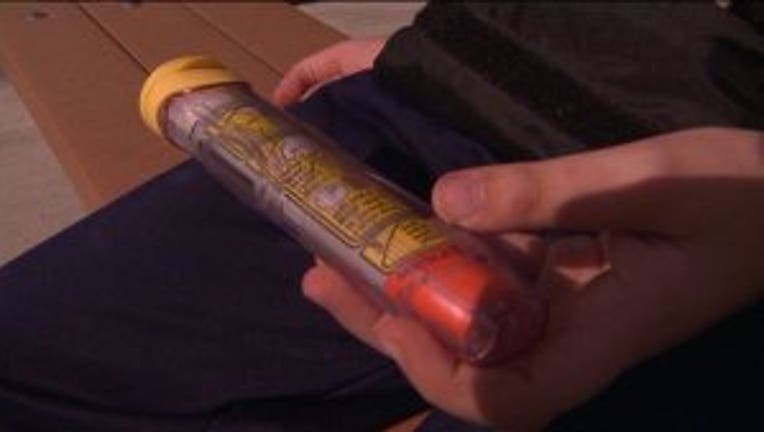 SEATTLE -- From peanuts to soy, kiwi to potato chips, young children can have life-threatening allergic reactions to all kinds of food.

And while a bill sped through the Washington state Senate approving the use of EpiPens by trained staff in elementary and middle schools, some nurses groups in Washington are still hoping the bill stalls before it reaches a vote in the House.

According to the Seattle Times, Senate Bill 5104, legalizing the use of EpiPen allergic reaction shots by any trained school administrator, stalled in the House after a School Nurse Organization objected to the current form of the bill. The bill allowed for any trained staff -- nurses or otherwise -- to administer the shot to all students, regardless if the students have been diagnosed with a severe allergy or not.

So far, the bill has not been heard in the House Education Committee, and a hearing needs to be rescheduled. Officials said the reschedule was not because of the nurses' group's objection, but because of a scheduling conflict.

For parents of children with allergies, the stalling of the the bill is stressful. One parent, Sally Porter, talked about the horrors of her son's severe food allergies, and how an EpiPen was used to save his life many times.

"He swelled and was drooling, grabbing at his tongue and his eyes were running," Porter said. "He was very puffy and covered in hives."

Sen. Mark Mullet, D-Issaquah, is the sponsor of the bill. He said he hoped doctors would soon be able to prescribe EpiPens en-masse to schools. He said it's common for students to have their first allergic reactions while away from home, before they are diagnosed. According to the Times, at least one quarter of first-time allergic reactions occur at school.

"If someone has a reaction that hasn't been diagnosed yet, there's nothing they can do but wait for 911 to show up," Mullet said.

Mullet objected to the nurses'  groups' problems with the bill, saying many schools don't have full-time nurses, and school administrators must be able to step in and save children from undiagnosed allergies. Medical experts even said giving a shot when it was unneeded wasn't dangerous, furthering Mullet's desire to allow school officials to give the shot.

"A lot of patients will feel extra energy and have a higher heart rate, but that's about it," said Dr. Kevin Dooms. "The benefits far outweigh any risks of not giving it at all."