Northbound I-5 in Seattle to be ccompletely closed this weekend

Northbound I-5 in Seattle to be ccompletely closed this weekend

SEATTLE -- The project, known as Revive I-5, is back this weekend. But with repaving work on State Route 99 and U.S. 2, this weekend could be rough.

The Washington State Department of Transportation at 8 p.m. Friday began closing a portion of northbound Interstate 5 from the West Seattle bridge through downtown.

This is what it looked like just before 11 p.m. Friday, as they moved traffic from two lanes into one and just before complete closure. 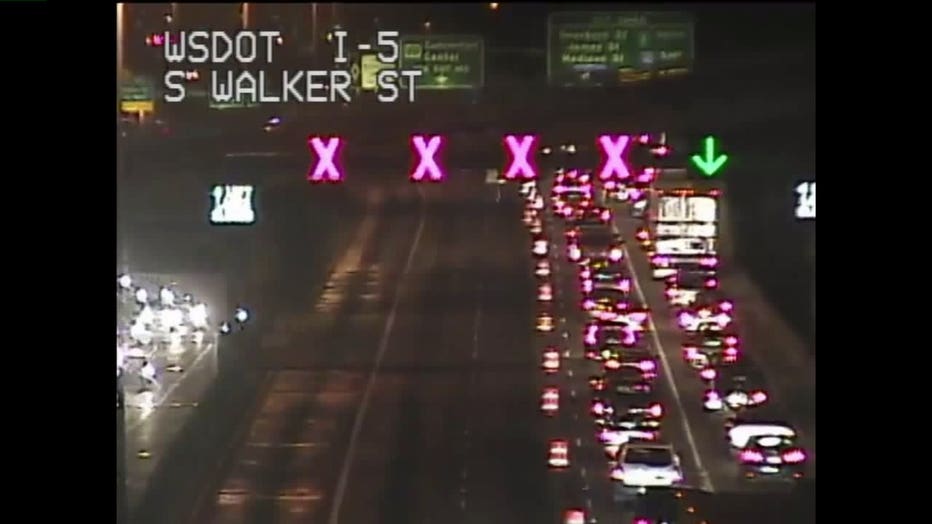 “This is going to be our second weekend where we have a full closure of northbound I-5 at the West Seattle bridge,” said Tom Pearce, WSDOT spokesperson.

Northbound lanes of I-5 starting where it meets up with I-405 near the Southcenter Mall will be reduced to two lanes in order to replace half of an expansion joint on the Duwamish River Bridge.

As you travel up north, though, you will either have to get off at one of the off-ramps that will remain open or once you get to West Seattle, end of the line, as the rest of I-5 from the bridge to Olive Way will be closed, according to WSDOT.

For those coming from West Seattle or Beacon Hill, you can use West Seattle bridge or the Columbian Way on-ramp onto I-5. But it'll only be one lane that will feed onto Interstate 90, James or Madison streets, or you could remain on the collector-distributor lane to rejoin I-5.

The closures are so that crews can replace expansion joints and concrete.

All northbound I-5 off-ramps between the I-405/SR 518 interchange and the West Seattle Bridge will remain open all weekend.

Southbound I-5 work Sunday morning
In addition to the northbound Revive I-5 work, WSDOT maintenance crews will reduce southbound I-5 traffic to two lanes across the Ship Canal Bridge between the University District and SR 520 from 2 a.m. to noon on Sunday, July 15, to repair parts of the aging bridge deck. The Northeast 45th Street on-ramp to southbound I-5 will also close during this time.

The full closure of northbound I-5 means there will be heavy traffic on all highways and roads around the region. Travelers should expect long backups on northbound I-405, State Routes 99, 509 and 599, as well as on city streets. To limit congestion, people should:

As for other alternatives, according to WSDOT, expect backups.

According to Pearce, the last Revive I-5 commuters experienced six-to-eight mile backups on northbound I-405. As for the major repaving work on SR 99, affecting more than seven miles from Roy Street to N. 145th, WSDOT is planning a way to alleviate backups.

That will give drivers plenty of time to jump back onto I-5 if they need to, said Pearce.  Plus most of the repaving work on SR 99 will be taking place at night.

The bottom line, though, is if your travels take you through Seattle, be ready.

During the first full weekend closure, June 2-3, backups on northbound I-5 were minimal because drivers avoided the highway and used alternatives to get into Seattle.

“What traffic looks like this coming weekend is up to travelers,” said WSDOT Assistant Regional Administrator Amir Rasaie. “We need people to adjust their travel plans again this weekend so we can minimize backups and keep traffic moving around the Seattle area.”

WSDOT crews will also be working on a portion of southbound I-5 from University District to SR 520. According to WSDOT, lanes across that area near the Ship Canal Bridge will be reduced to two lanes from 2 a.m. to noon on Sunday.

Two more Revive I-5 closures are planned for next month.