PAHOA, Hawaii  — A new fissure emitting steam and lava spatter spurred Hawaii officials to call for more evacuations on Sunday as residents braced for an expected eruption from the Kilauea volcano.

The Hawaii County Civil Defense issued an alert after the fissure was discovered along a road west of a major highway on the Big Island. Residents on that road were told to evacuate, and two nearby community centers were serving as shelters for people and pets.

Popping, exploding and sloshing sounds could be heard from the fissure as far as 1,500 yards (1,400 meters) away. But the behavior from the fissure was not terribly vigorous, the U.S. Geological Survey's Hawaiian Volcano Observatory said.

"The appearance of the fissures in the past couple of days does not change the overall picture or concern," observatory scientist Steve Brantley said. "The amount of lava that has erupted from the fissure so far is very, very small."

The fissure measures about 1,000 feet (300 meters) long. Brantley said it was emitting intermittent lava spatter but there was no substantial lava flow.

The fissures, ground deformation and abundant volcanic gases indicate eruptions on the eastern flank of Kilauea are likely to continue.

Most of the lava outbreaks have occurred in and around the Leilani Estates neighborhood, where molten rock has burst through the ground, destroying more than two dozen homes and resulting in evacuation orders for nearly 2,000 people.

The U.S. Geological Survey has reported nearly 20 active fissures. One that opened Saturday night was spattering, but no flow had formed. 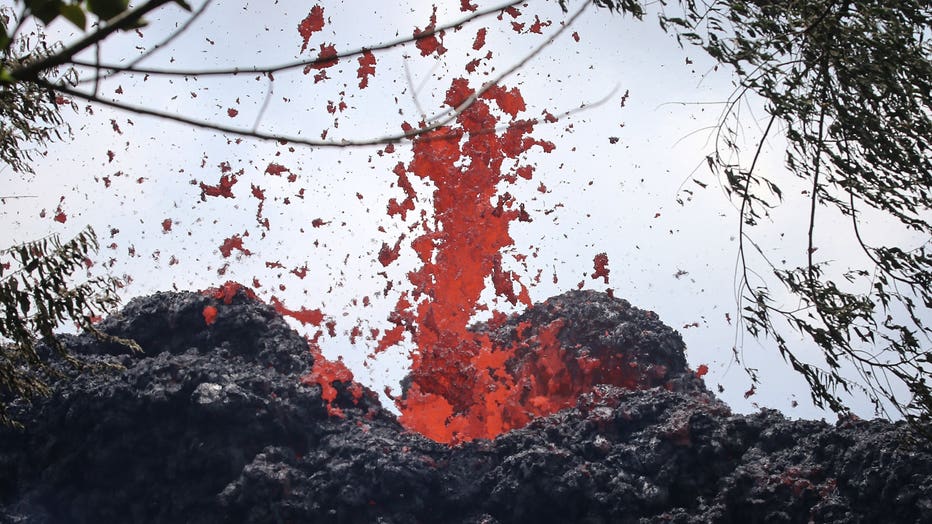 The Hawaiian Volcano Observatory reported the fissures opened just east of the Puna Geothermal Venture energy conversion plant, where steam and hot liquid are brought up through underground wells and the steam feeds a turbine generator to produce electricity. Plant workers last week as a precaution removed 50,000 gallons of a flammable gas stored at the site.

Geologists warn that Kilauea's summit could have an explosive steam eruption that would hurl rocks and ash miles into the sky.